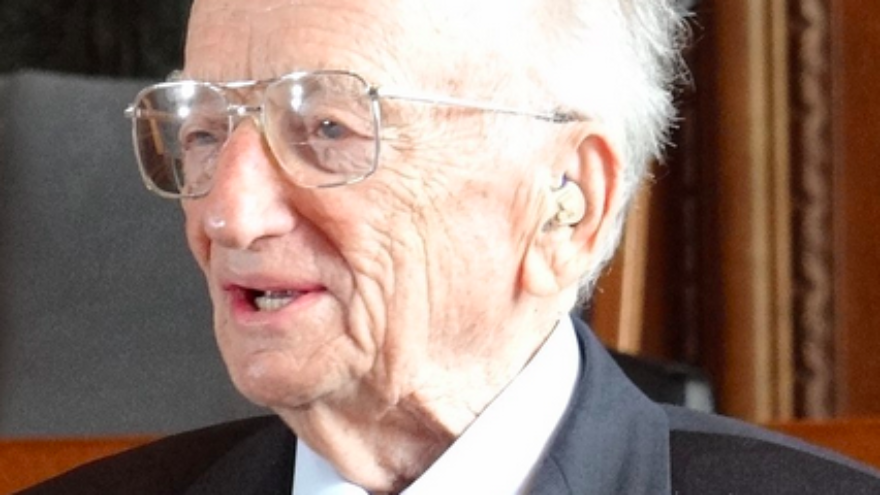 Over the course of his life, Ferencz has advocated for the rule of law and international justice. During World War II, Ferencz served in the U.S. Army and helped collect evidence of Nazi war crimes. Following the war, he was honorably discharged with the rank of sergeant of infantry and was awarded five battle stars for his service. Later, Ferencz was appointed chief prosecutor in the proceedings that convicted 22 former Nazi Schutzstaffel (SS) officials.

The bill was included in the Fiscal Year 2023 spending package and is expected to pass on Friday with President Joe Biden’s signature.

“By awarding Ben Ferencz, the last living Nuremberg prosecutor, with the Congressional Gold Medal, Congress is sending an important message: that hate, bigotry, and antisemitism can never be tolerated,” said Rep. Frankel. “This message couldn’t come at a more important time with antisemitism and Holocaust denial on the rise.”

Frankel went on to praise Ferencz as a hero of the Jewish community who has dedicated decades of his life to combating antisemitism and keeping the lessons of the Holocaust alive.

“Ben Ferencz is a true champion of human rights,” said Rep. Wilson. “Beginning with his time as an investigator in World War II and chief U.S. Army prosecutor during the Nuremberg Trials, through his long, outstanding career as an advocate of the international rule of law. Mr. Ferencz deserves our respect and appreciation.”

Wilson expressed his gratitude for having co-led this bipartisan, bicameral legislation to award Ferencz the Congressional Gold Medal, in honor of the former prosecutor’s “lifelong dedication to justice and integrity.”

“As Co-Chair of the Tom Lantos Human Rights commission, I often hear how grave atrocities such as genocide happen because good people look the other way or fail to take action,” said Rep. McGovern. “I am so proud that Congress is coming together in a bipartisan way to honor Mr. Ferencz with the Congressional Gold Medal. For ‘never again’ to mean ‘enough is enough,’ it is critically important for us to continue to honor and elevate the work of heroes like Mr. Ferencz.”

The Congressional Gold Medal is Congress’ highest expression of national appreciation for distinguished achievements and contributions. The first award was given to George Washington, and it has been awarded 184 times to America’s national heroes.

“Certainly, Ben Ferencz, who has spent more than 50 years prosecuting war crimes and genocide, qualifies for this prestigious honor,” said Rep. Bilirakis. “Throughout history, humanity has encountered many faces of evil. Our brightest moments as an international community have been those in which we present a united front in our efforts to identify and eradicate its presence.”

Sen. Gillibrand was joined by Senate Majority Leader Chuck Schumer (D-N.Y.), Sen. Ben Cardin (D-Md.) and Sen. Roger Wicker (R-Miss.) in leading the Senate companion bill. The bill enjoyed the support of 296 House cosponsors and 81 Senate cosponsors. It was endorsed by the Anti-Defamation League and the American Jewish Committee.

“I am so honored to have secured the awarding of the Congressional Gold Medal to Benjamin Ferencz, a champion for human rights and the last living Nuremberg prosecutor,” said Sen. Gillibrand. “Mr. Ferencz’s life exemplifies what it means to dedicate oneself to compassion, empathy and righteousness. Few people have been more deserving of this tremendous honor.”