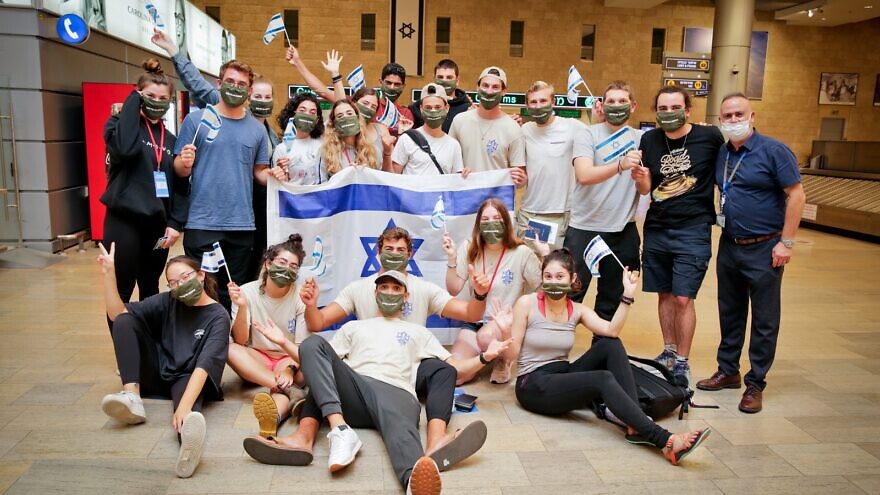 (December 27, 2021 / JNS) Valerie Greenfeld, 58, immigrated to Israel just before Passover 2021 from Washington, D.C., amid widespread travel restrictions imposed to curb the spread of COVID-19. She began her quarantine immediately after arriving in Israel, which coincided with the first night of Passover. She had her own one-woman Passover seder and though it was a different way to celebrate the holiday than most years, she told JNS that she “felt very connected.”

Beginning the aliyah process in 2019, Greenfeld’s immigration was delayed because of the pandemic. “It took two years before I had the approval to make aliyah. All the documents I had prepared early in the process expired because of COVID-related delays and I had to submit them all over again.”

Finally making it to Israel, Greenfeld was one of the 27,057 new immigrants to become Israeli citizens in 2021, an increase of 30 percent compared to the prior year. Despite travel restrictions, 2021 also saw a record-breaking year for American immigration to Israel.

The Ministry of Aliyah and Integration, with the Jewish Agency and Nefesh B’Nefesh, recently released this year’s official aliyah data—noting the rise in total immigrants compared to last year’s 21,120 new immigrants. In 2019, before the pandemic, 35,651 people immigrated to Israel.

Greenfeld believes that the uptick may be a result of both “people who care about Israel wanting to feel close to the country, as well as fear.” Valerie Greenfeld and her dog, Cocoa, after arriving in Israel. Credit: Courtesy.

“A terrible rise in anti-Semitism in the United States and all over the world, in synagogues, universities, schools and social media, as well as its re-emergence in a different form called anti-Zionism … people who care about Israel feel close to the country and at the same time, they are realizing that history repeats itself,” she said.

An olah from Vancouver, Canada, Becca Wertman-Traub, similarly shared that “while everyone, of course, has their own reasons for making aliyah, including reuniting with family members and Zionism, there is no doubt that the rise in anti-Semitism and the COVID-19 pandemic had an influence.”

“Regarding COVID-19, the fact that numerous workplaces are now virtual enabled individuals who had been wanting to make aliyah to maintain their careers while also living in the Jewish state. For others, our advanced health-care system perhaps was an incentive,” she told JNS.

Aliyah and Integration Minister Pnina Tamano-Shata said at a recent press conference discussing the trends: “Despite the pandemic and its limitations, aliyah to Israel did not stop and we’re happy to welcome tens of thousands of olim who chose to make aliyah this year. They are an incredible growth engine for the Israeli economy and are a national, economic and moral powerhouse for the nation.” New immigrants reported feeling the pandemic’s limitations that Tamano-Shata referred to, perhaps even more than Israel-born citizens. Wertman-Traub got engaged at the very beginning of the pandemic and planned a wedding in Israel but had to change the wedding date three times, and in the end, due to the entry restrictions, moved the wedding to Vancouver to ensure that her family and close childhood friends could be present.

“This was very hard emotionally—as two olim who had met in Israel, it was important to us for our loved ones to see the lives we had worked so hard to build together in Israel,” said Wertman-Traub.

“Due to the difficulties in traveling and the recurrent travel bans in Israel,” she continued, “I did not see my family for 1.5 years. It was something I never imagined would occur in my life and was truly painful. When I made aliyah, I made it with the confidence that I would see my family multiple times a year. I never thought that 1.5 years would go by where I did not hug my mom, dad and brother.”

Wertman-Traub shared her belief that “the State of Israel does an excellent job of assisting individuals in making aliyah and getting started once new olim arrive, but there is significant room for improvement in ensuring olim integrate and that we are recognized within Israeli society.”

Nevertheless, she said, “it is empowering to see that despite all the challenges we face, that so many people are continuing to make and call Israel their home.”