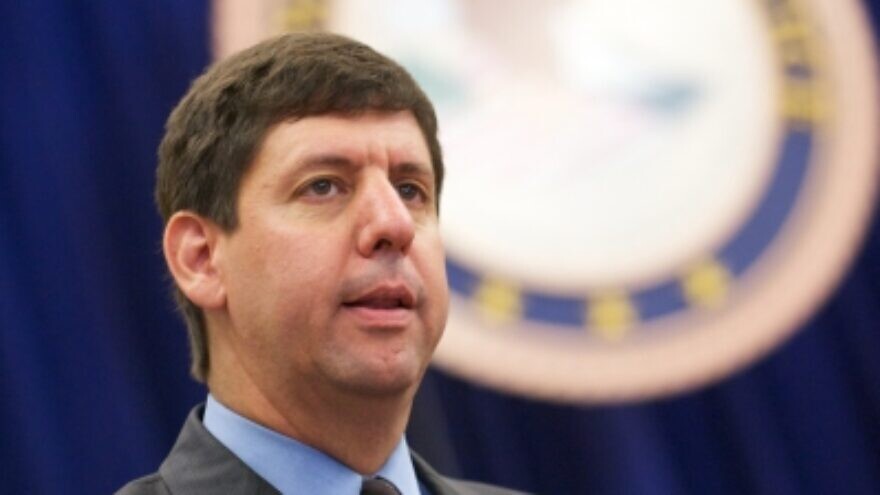 (July 21, 2022 / Cleveland Jewish News) Bracken County Republicans in Kentucky shut down its Facebook page and launched an investigation after someone reposted a white supremacist’s statement that called newly confirmed federal Bureau of Alcohol, Tobacco, Firearms and Explosives Director Steve Dettelbach a member of the “Jewish junta.”

The post caused a stir throughout the Kentucky Jewish community and beyond.

Dettelbach, 57, a Solon resident, was U.S. Attorney for the Northern District of Ohio from 2006 to 2016, and a partner at BakerHostetler in Cleveland. He was confirmed as ATF director July 12 by a 48-46 vote in the Senate.

He issued a statement about the post to the Cleveland Jewish News on July 19.

“Freedom of religion is central to our national identity,” Dettelbach wrote. “This kind of hateful rhetoric is, sadly, part of a broader increase in antisemitism and other forms of extremism. It targets not just me, but also seeks to hurt ordinary and often vulnerable American families and children. We need to call it out for what it is—bigotry that goes against the basic ideals of the United States of America.”

Jordan has written for a number of white supremacist sites, including the neo-Nazi Daily Stormer, she said.

“The term ‘junta’ refers to an illegitimate regime that has seized power by force,” Scheinbach told the CJN on Monday. “It plays off several classic antisemitic tropes: one, that Jews are power hungry; two, that Jews have seized control by force, violence, or unjust plots or schemes; and three, that Jews have a secret, ‘Jewish interest,’ and that they place Jewish interest over non-Jewish interests. It’s an antisemitic myth that’s dangerous. It promotes untrue stereotypes about Jews that further threaten Jewish safety and lives. …

“ADL has been tracking antisemitic incidents since 1979, and last year was the highest year on record. So we know that antisemitism is on the rise, and antisemitic rhetoric should never ever be used by political parties. They should be calling it out, not amplifying it.”

“Words matter. The term ‘junta’ was carefully chosen by whoever wrote this offensive post,” she told the CJN on Monday. “To imply that Jews are plotting to violently overthrow our government feeds into antisemitic tropes that are becoming all too common in our society. While the Bracken County Republicans may have denounced the post, it must be more diligent to ensure posts under their name are properly vetted and that those who embrace such toxic ideologies have no home in their county’s Republican Party.”

Rabbi Shlomo Litvin, chairman of the Kentucky Jewish Council, immediately denounced the post and said he was dissatisfied with the apology.

Litvin learned of the “Jewish junta” post from a leader of the Republican party in Kentucky, he told the CJN on Monday.

“Before I had concerns, they let me know they were addressing it,” he said.

Litvin, whose organization lobbies for Jews in Kentucky, said he received calls from Jews concerned about the post as well as from reporters, including the reporter from “The Louisville Courier-Journal” who broke the story.

He said the Kentucky political stage has been the forum for a rising tide of anti-Semitism in the past six months: first with the attempted assassination of Louisville mayoral candidate Craig Greenberg in February, then with rhetoric that would have provided a religious exception to Jews regarding a proposed abortion bill on the state legislative floor, and most recently in campaign flyers targeting Kentucky state House candidate Daniel Grossberg, which included the statement, “Don’t let them steal the election.”

Litvin said there has been anti-Semitic rhetoric among both Democrats and Republicans.

He explained that the post had clearly been copied and pasted into the Facebook feed. He said he spoke with Kirkendol on Monday.

“She was incredibly hurt that these ideas would be ascribed to her,” said Litvin. “She confessed she wasn’t even sure of all the entire meaning in the beginning … and she was horrified by it.”

He offered to educate the Bracken County Republicans about anti-Semitism.

The Republican Party of Kentucky issued a brief statement following the post.

This is an edited version of an article first published by the Cleveland Jewish News.