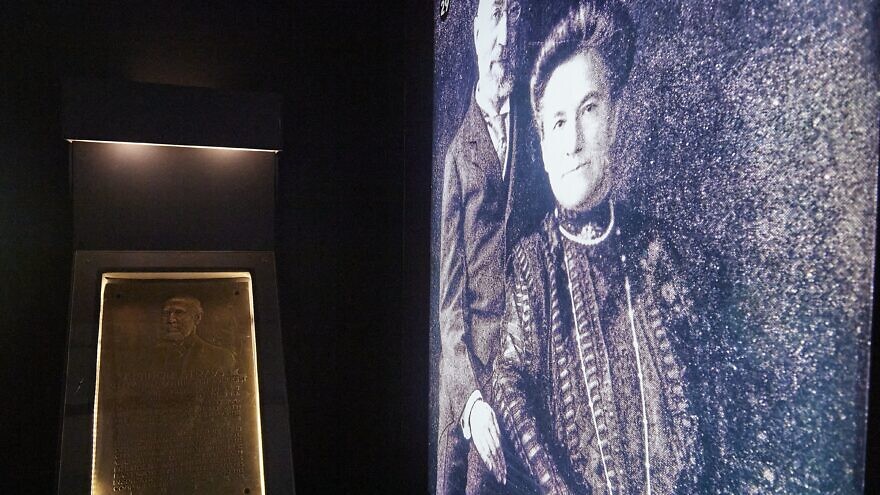 Isador and Ida Straus and a monument to him. The couple chose to die together. Photo by Perry Bindelglass.
Republish this article
723 WORDS
Spread the word.
Help JNS grow!
Share now:

(November 21, 2022 / JNS) “Where you go, I go,” Ida Straus told her husband, Isidor, aboard the RMS Titanic in April 1912. With lifeboats available for women and children first, men had to wait. Given a chance for a seat due to his wealth and status, Isidor refused a place on a boat. Though she could have gotten on a lifeboat and lived, Ida chose to share the fate of her husband. Both drowned.

Ida’s fateful choice is included in “Titanic: The Exhibition,” now open near Union Square in Manhattan. The exhibit features a large picture of the two first-class passengers as well as a monument of Isidor, a co-owner of Macy’s who served for just over one year in Congress, as a Democrat representing New York’s 15th district.

In James Cameron’s 1997 film, “Titanic,” there is a scene in which the couple hold each other as they lay in bed and flooding waters rush in. In reality, they were on the deck of the ship, similar to a scene that didn’t make the final cut of the film. They each emigrated from Germany to New York with their families. They married in 1871 and had seven children. Isidor’s body was found but hers was not. He was 67, and she was 63.

Thought to be unsinkable, the luxury steamship on its maiden voyage, struck an iceberg on the evening of April 14, 1912, four days after departing from Southampton, England. When it foundered in the wee hours of the next morning, more than 1,500 of the 2,240 aboard died.

Third-class passengers were the least likely to survive. But one who did was Jewish passenger Sarah Roth, who was able to get on what was known as Collapsible C.  The exhibit shows what is believed to be the only third-class menu recovered from April 14 on the Titanic. Offerings included oatmeal, smoked herring, roast beef, cold meat and sweet corn. 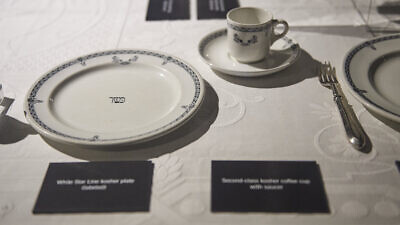 The exhibit also includes kosher plates, cups and silverware as well as a plate identified as kosher in Hebrew, while a knife has the same word and “milk” engraved on the handle. While not recovered from the Titanic itself, they were used on the White Star Line, meaning that similar dishes would likely have been on the Titanic.

For film fans who enjoyed the performance of Leonardo DiCaprio and Kate Winslet as Jack and Rose, while their exact love story is fictional, the real-life story of Katie Phillips is on display, including her necklace, suitcase, keys and purse. Phillips and Henry Morley were both married to other people and had an affair. Their plan was to elope and move to California. She survived the sinking of the ship but he did not. Her suitcase remains at the bottom of the ocean. 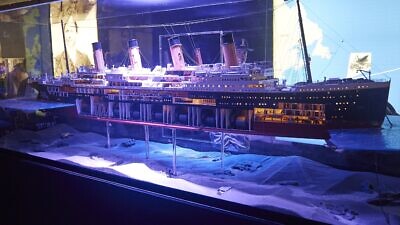 A miniature replica of the doomed ship. Photo by Perry Bindelglass.

The exhibit also features replicas of the ship prior to departure and of what was found at the ocean floor, wrecked. There is also a replica of the Titanic’s Marconi Wireless room. Chief telegraphist Jack Phillips was told by Captain Jack Smith to send out a distress signal and seek help shortly after midnight on April 15. According to Charles Lightoller, Phillips slipped into the water and was taken on a lifeboat, but he did not survive. Lightoller, who was second officer and was off-duty when the ship hit the iceberg, said a vital warning from the Masaba ship that an iceberg was directly in the Titanic’s path had never arrived. But the ship had received other warnings of icebergs prior to hitting one.

Curiously, the exhibit does not include a photo of Benjamin Guggenheim, the Jewish millionaire who is believed to have said aboard the Titanic, “We’ve dressed up in our best and are prepared to go down like gentlemen.” The Guggenheim Museum in Manhattan is named after his brother Solomon.

Bruce Ismay, chairman of the White Star Line, was said to have given the order to reduce the number of lifeboats so as not to clutter the ship. Reports vary, with some saying he got on the first lifeboat and others saying he was ordered to board a lifeboat by a ship official. Ismay himself claimed there was nobody else in his vicinity, so he took an open seat in a lifeboat. He was viewed by many as a villain.

The exhibit also features beautiful staterooms and numerous stories of other passengers, both survivors and victims.