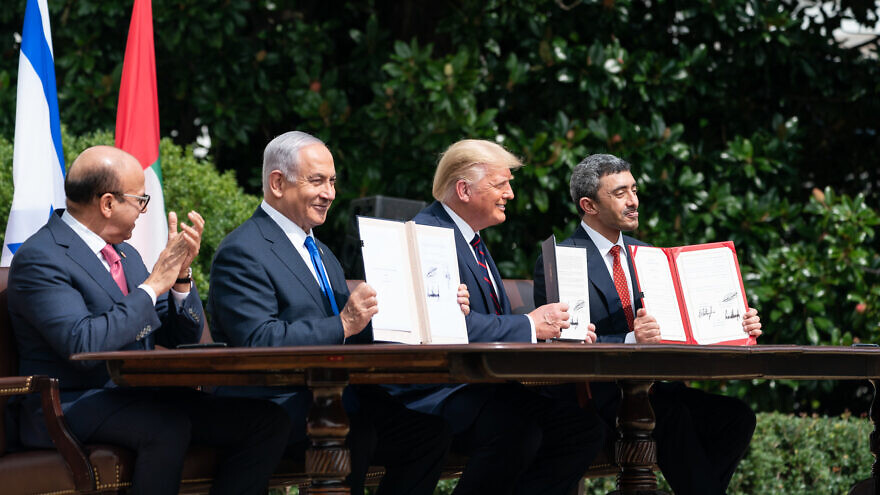 (October 12, 2021 / JNS) A little more than one year after being signed at the White House, the historic Abraham Accords came to life at a star-studded gala event in Jerusalem on Monday.

The event featured the premiere of an upcoming five-hour Trinity Broadcasting Network documentary series, aptly named “The Abraham Accords,” co-produced by former U.S. Ambassador to Israel David Friedman, and also served as the launch event for the newly created Friedman Center for Peace Through Strength.

The gala was also the inaugural event of Jerusalem’s newly-minted Museum of Tolerance, and at 500-plus participants was one of the first large indoor events to be held in Israel since the onset of the coronavirus pandemic. Attendees included former U.S. Secretary of State Mike Pompeo, former Treasury Secretary Steven Mnuchin, Jared and Ivanka Trump, former Israeli Prime Minister Benjamin Netanyahu, former Mossad director Yossi Cohen, FIFA president Gianni Infantino and former NFL quarterback Peyton Manning. The event was co-chaired by Larry Mizel, chairman of the Museum of Tolerance, and philanthropist Sylvan Adams.

“We are on the cusp of ending the Israeli-Arab conflict and changing the region for the next 100 years,” Friedman told the assembled crowd. The accords, he said, demonstrated that Israel could be a trusted partner within the Islamic world. He noted that while many unfairly blame Israel for all the problems of the Middle East, “Israel should be the solution. Not the problem.”

The accords, he continued, are “poised for extraordinary growth” with regard to both those countries that have already joined them and those that will do so in the future.

“I think as more countries see the opportunity and the growth and the benefits that are gained by the Gulf nations and Morocco and Sudan … more people are going to want to join,” he said.

In addition to launching the film, which will be broadcast later this year on TBN, Friedman presented former Secretary of State Mike Pompeo with the inaugural Peace Through Strength Award. 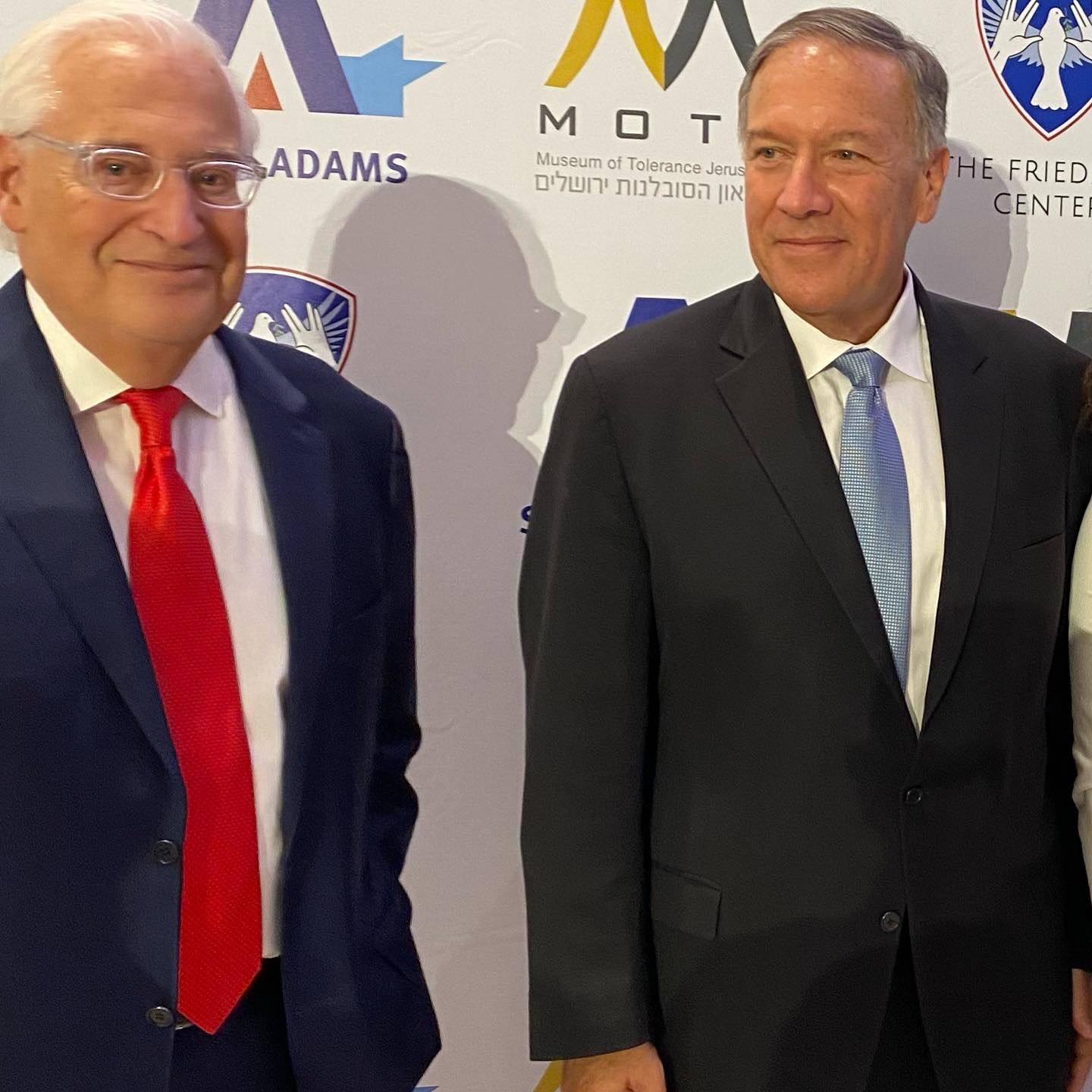 Former U.S. Ambassador to Israel David Friedman (left) and former U.S. Secretary of State Mike Pompeo attend the premier in Jerusalem on Oct. 11, 2021, of a documentary film, co-produced by Friedman, focusing on the history of the Abraham Accords normalization agreements between Israel and several Arab states. Credit: Courtesy.

In accepting the award, Pompeo explained how the Trump administration came to officially recognize Jerusalem as Israel’s capital, recognize Israeli sovereignty over the Golan Heights and change longstanding American policy by declaring that Israeli settlements are not inherently illegal.

“Israel is not an occupying nation,” he stated.

The former secretary explained that the concept of peace through strength promoted by the Friedman Center “is not particularly original” and has long been the doctrine of American leaders.

“The central thesis of our administration was to ensure that America was strong in every facet, to help bring peace not just to our country, but to the entire world,” said Pompeo.

Moral clarity, he said, is an essential component of strong leadership, emphasizing that “clarity matters. Peace follows from strength, truth and clarity.”

Referring to Israel, Pompeo noted that “one needs to be unambiguous about who the good guys are.”

FIFA president Infantino said that the Abraham Accords are proof that “we have to dream big. We have to bring the world together.”

Following the opening events, participants then watched a 38-minute segment of the new documentary, which features exclusive behind-the-scenes interviews with several of the major players involved in formulating the first of the normalization agreement between Israel and the United Arab Emirates, and Israel and Bahrain.

“This is a narrated documentary that’s presented through the voices of everybody who participated,” Friedman told JNS. “So you’ll watch this movie and you’ll hear from [former] President [Donald] Trump, Vice President [Mike] Pence, Secretary Pompeo, Secretary Mnuchin, Jared Kushner, [senior adviser to Kushner] Avi Berkowitz, [UAE Ambassador to the U.S.] Yousef Al Otaiba, the foreign minister of Bahrain, the former foreign minister of the UAE and former Israeli Ambassador to the United States Ron Dermer.”

“The film, to me, is incredible,” he added. “I think it really helps people to get their arms around the Abraham Accords; what it means, how it got there. To identify, sort of, with the players and the goals, and to really kind of feel a part of it. I think it’ll inspire people to keep working on it. I think it’s a good legacy for all those who worked on it. It’s moving. I think people will be moved by it.”

Discussing the upcoming work of the Friedman Center, an American nonprofit organization that will also operate an office in Jerusalem, the former ambassador said that a “huge opportunity” existed for Israel to welcome the Islamic world to Jerusalem.

“The way Israel treats the holy sites of all the Abrahamic faiths, whether it’s the churches or the mosques, or obviously, the synagogues or the other Jewish holy sites, I think it’s one of the things that Israel does really well. They protect the rights of all faiths. They show great religious tolerance for all faiths. And it’s something to be proud of,” he said. “And I think if more Muslims came here and saw what Jerusalem was like, I think it could have a huge salutary effect in terms of peace.”

He added that the diversity of the city, which has large populations of Jews, Christians and Muslims, as well as holy sites belonging to all three faiths, “makes Jerusalem kind of the epicenter of international cooperation and tolerance. It just has to be brought out and explained. And since I’m here a good portion of the year and because I think I have the right pedigree with regard to Jerusalem and what it stands for, I think I can add value in helping to make it a place where peace really is the order of the day.”

“Jerusalem means ‘the city of peace,’ ” he said, adding that he hopes to help “try to make Jerusalem more worthy of its name.”

‘The U.S. has a critical role to play’

Alluding to the current U.S. administration’s plan to reopen a shuttered consulate in Jerusalem to serve the Palestinian Authority, Friedman insisted that Jerusalem must “remain an undivided city.” Reopening the consulate, he said, “is exactly the wrong thing to do for so many different reasons. From a diplomatic perspective, it will add nothing. From a legal perspective, I don’t think it works. From a practical perspective, I just think it sends the wrong message.”

Regarding the role of the Abraham Accords in helping to solve the protracted Israeli-Palestinian conflict, Friedman said “it’s less about peace being made from the outside in or the inside out. I think the Abraham Accords demonstrate that Israel can be a trusted partner within the Muslim world and create a massive opportunity for the Palestinian people.” When they see what has been accomplished, said Friedman, the “Palestinian people will hopefully recognize that a much better life awaits for them, awaits them being aligned with Israel and working cooperatively with Israel, rather than being in a state of conflict.”

According to Friedman, it is imperative to maintain the momentum of the accords despite the fact that since they were signed, new administrations have come to power in both Washington and Jerusalem.

“The U.S. has a critical role to play,” he told JNS. “It must support these normalizations not just with words, but with deeds. And I’m hopeful that the Biden administration does what they’re now saying they’re going to do, which is to advance them.”

He added: “It could really change the Middle East for the next 100 years if it’s handled correctly.”

Event co-chairman Sylvan Adams told JNS that the event was just “the first edition.” The idea, he said, is to build on them going forward.

“Hopefully, the Democrats will get active in pushing additional countries to join,” he said, noting that some countries, such as Oman, had been close to “joining the party” as the Trump administration left office.

According to Adams, the change of administrations has caused “a bit of hiatus.”

“The Abraham Accords needs to be a bipartisan issue,” he said. “The fact that we now have a warm peace between Israel and five Muslim countries, it’s just low-hanging fruit for the Democrats to continue this wonderful work.”