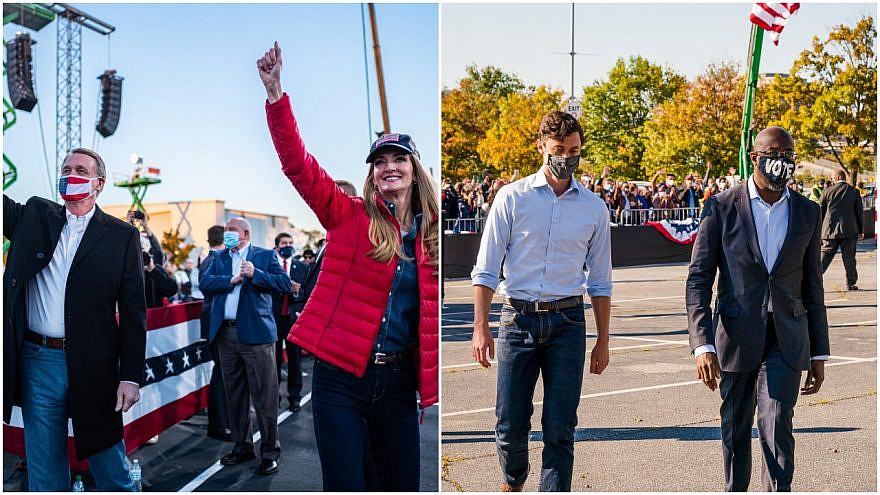 (December 29, 2020 / JNS) The U.S. Senate runoffs in Georgia to take place on Jan. 5 have expectedly generated intense national interest and already become the most expensive in history with some $340 million raised so far. Democrats Jon Ossoff and Rev. Raphael Warnock have hauled in more than $100 million each, significantly more than Republican Sens. David Perdue and Kelly Loeffler at $68 million and $64 million, respectively.

With the outcome set to determine control of the Senate for the upcoming Biden administration, the stakes are about as high as they can get. American Jewish groups from both sides of the aisle have invested heavily in the race, as they see stark differences in the candidates’ policies on topics such as the U.S.-Israel relationship, the Iran nuclear deal, anti-Semitism and more.

Most of the scrutiny by the Jewish and pro-Israel community surrounding the runoffs has been on the race between Loeffler and Warnock.

Loeffler has supported Trump’s pro-Israel agenda, while Warnock has come under fire for defending anti-Semitic Rev. Jeremiah Wright, giving a May 2018 sermon in which he accused Israel of shooting non-violent Palestinian protesters, signing onto an anti-Israel statement last year that likened Israeli control of the West Bank to “previous oppressive regimes” such as “apartheid South Africa” and presenting a 2016 sermon that compared Israeli Prime Minister Benjamin Netanyahu to segregationist and former Alabama Gov. George Wallace.

Last month, Warnock released an editorial by the Democrat titled “I Stand With Israel.” In that piece, he did not repudiate those past controversies.

The Jewish Democratic Council of America endorsed Warnock and Ossoff, who is Jewish, both in the general election and ahead of the runoffs, and hosted a Dec. 8 virtual event that also featured Ossoff.

Warnock, the pastor of the historic Ebenezer Baptist Church in Atlanta where civil-rights icon Martin Luther King Jr., preached, also said, “I am a staunch ally and supporter of Israel, and I echo without reservation Dr. King’s perspective that Israel’s right to exist as a state and in security is incontestable.”

In addition to holding the event (its super PAC cannot give directly to the candidates in accordance with election law), JDCA PAC has been fundraising and spending money in campaigning for Warnock and Ossoff. It is spending close to $200,000, the council’s CEO, Halie Soifer, told JNS.

According to Soifer, JDCA has put out digital ads and sent direct mail pieces to more than 50,000 homes in Georgia. It has also been making an estimated 50,000 phone calls and sent 50,000 text messages to nearly 100,000 Jewish voters in the state. The organization isn’t doing door-to-door canvassing, as requested by the campaigns due to concerns about the spread of the coronavirus.

In response to the criticism Warnock has gotten for his past statements and actions on Israel, Soifer cited his position paper and remarks during the JDCA event. “He’s made it clear that he strongly supports the U.S.-Israel relationship, he strongly supports the full implementation of the MOU [from 2016 between the United States and Israel worth $38 billion over a decade in defense assistance].”

“He does not support any cutting or conditioning of aid,” she continued. “He opposes BDS. So he’s made it clear that he shares our views when it comes to Israel.”

She dismissed the criticism of Warnock’s support for Wright and called it “guilt by association claim from many years ago,” saying it’s not “relevant” to the runoffs.

Rather, what is far more relevant, said Soifer, is Loeffler’s ties to House Rep.-elect Marjorie Taylor Greene (R-Ga.), who has trafficked in anti-Semitic, and other racist and conspiratorial remarks, and has also heralded QAnon.

In a statement that day, DMFI PAC president Mark Mellman said the endorsement of Warnock was decided following a Zoom conference between the candidate and DMFI leadership.

“Warnock is strongly committed to strengthening the U.S.-Israel relationship, as well as to achieving social justice, delivering affordable health care for all Americans and creating opportunities for all to succeed,” he said.

Mellman echoed the talking points of Jewish Democrats who say Warnock has expressed support for U.S. assistance for Israel, support for a two-state solution to the Israeli-Palestinian conflict and opposition to the BDS movement.

He also mentioned Warnock inviting Israeli Ambassador to the United States Ron Dermer in 2015 to address “his congregation during Sunday services.

Like JDCA and DMFI PAC, JStreetPAC has endorsed Ossoff and Warnock. JStreetPAC has raised more than $500,000 for the runoffs with $385,000 of that going directly to the campaigns and $115,000 going to the group Fair Fight to assist with their organizing efforts, J Street spokesperson Logan Bayroff told JNS.

JStreetPAC, joined by Chicago-based black women-led grassroots group Women2Win, held a fundraiser for Ossoff and Warnock on Dec. 21 that was attended by the Democratic candidates.

Turning out the Jewish vote

The Republican Jewish Coalition, which endorsed Loeffler and Perdue, has been doing targeted Jewish outreach in Georgia since the runoffs were declared shortly after the Nov. 3 election, the organization’s national political director, Sam Markstein, told JNS. The campaign strategy has included sending 25,000 text messages, 100,000 phone calls and canvassing by knocking on thousands of doors in the Atlanta suburban countries including Fulton, Cobb and DeKalb.

The RJC plans on tens of thousands of text messages and phone calls every day until Jan. 5, added Markstein.

Whereas JDCA has released campaign ads, the RJC has not. Markstein said that hundreds of millions have already been spent on ads by other entities.

“We’re focusing on where we can make a difference in a market that is so overly saturated with ads, we don’t think it’s a good use of our time, energy or resources,” he said. “We’re going to be focusing on to turn out the Jewish vote is to hyper-target the grassroots ground game in Georgia, whether it’s in-person canvassing, virtually through phones or texts as well as raising money directly for the campaigns from our generous supporters from across the country.”

The RJC’s political action committee, RJCPAC, has raised around $700,000, while RJC national chairman and former Sen. Norm Coleman (R-Minn.) raised around $1 million, according to Markstein. RJCPAC has a portal through which RJC members can donate to the candidates in accordance with campaign finance laws.

On Warnock, Markstein said, “I would direct you to the comments made by local [Orthodox] rabbis—representatives of the Jewish community in Georgia who would know better than anybody else who Raphael Warnock truly is, and they lambasted him for his rhetoric, for his actions, and they strongly encouraged voters to reject him and his record on Jan. 5.”

On Loeffler’s association with Greene, who endorsed Loeffler, Markstein deferred to RJC executive director Matt Brooks, who did not respond to a request for comment on the issue.

Perdue, who co-sponsored an anti-BDS law in 2017, has supported Trump’s pro-Israel agenda, while Ossoff has supported the Iran nuclear deal. In a statement to Jewish Insider, Ossoff warned that Israel applying sovereignty to the West Bank would undermine “efforts to achieve a two-state solution. A sustainable and humane resolution of conflict can only be achieved by diplomacy.”