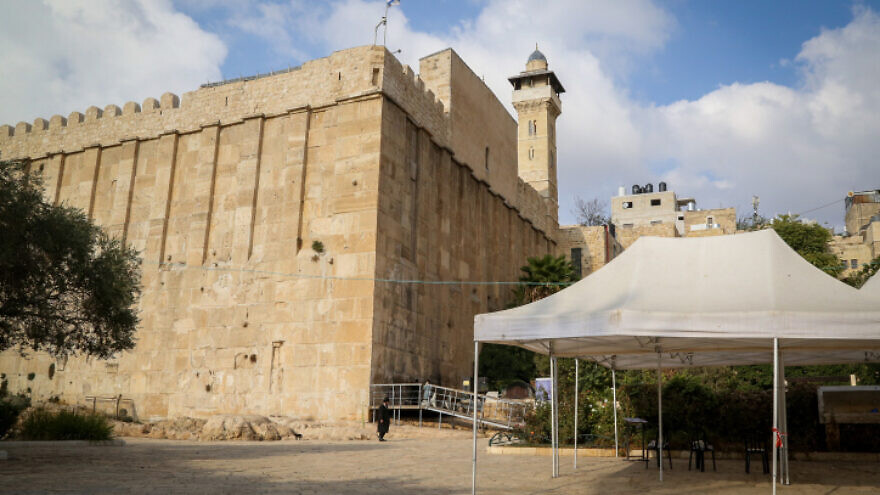 The Tomb of the Patriarchs in Hebron, Oct. 21, 2021. Photo by Gershon Elinson/Flash90.
Spread the word.
Help JNS grow!
Share now:

(November 20, 2022 / JNS) Israel Defense Forces Chief of Staff Lt. Gen. Aviv Kochavi condemned on Sunday the previous day’s assault on a female soldier in Hebron by an Israeli civilian, which resulted in her being lightly injured and requiring medical care.

The attacker struck the soldier with a stick and then fled. Several suspects were arrested for throwing rocks and damaging property, the army said.

The incident occurred as the IDF was providing a security escort for worshippers to the tomb of Othoniel Ben Kenaz, the first of the biblical judges, during celebrations for the Chayei Sara weekly Torah reading.

“This is a very serious event. It cannot be that an Israeli civilian will violently attack IDF soldiers who operate to protect and keep civilians safe. This shameful and criminal behavior requires a rapid lawful response,” said Kochavi.

Noam Arnon, Hebron community spokesman, released a statement on Sunday saying, “Out of the thousands [who arrived in Hebron], there is unfortunately a group of hooligans, people who came from afar, and see an opportunity to express what they feel in a vulgar manner, in an unruly manner.”

Arnon later told Ynet, “These people feel hate towards their surroundings. It is very unfortunate. This is a phenomenon that requires both psychological and police treatment.”

More than  30,000 people visited Hebron and neighboring Kiryat Arba over the weekend to mark the Chayei Sara Torah portion, in which worshippers read about the purchase of the Cave of the Patriarchs by Abraham.