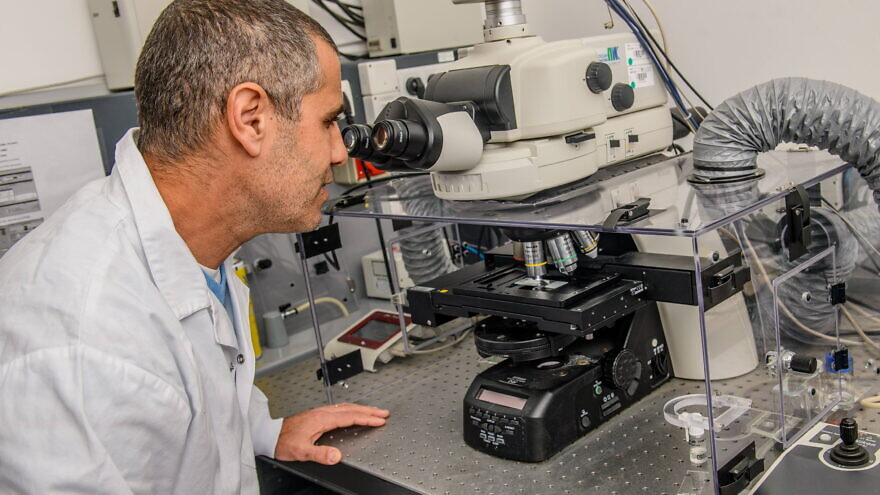 Now, the researchers are preparing for the next stage of the study: clinical trials in humans, which they say could begin in as little as two-and-a-half years.

Millions of people around the world are paralyzed due to spinal injury and lack effective treatment. According to the Miami Project to Cure Paralysis, approximately 17,810 new spinal-cord injuries occur each year in the United States alone.

The research, published Monday in the peer-reviewed Advanced Science journal, was conducted by professor Tal Dvir of Tel Aviv University’s Sagol Center for Regenerative Biotechnology. A team of Ph.D. and postdoctoral students supported the efforts. 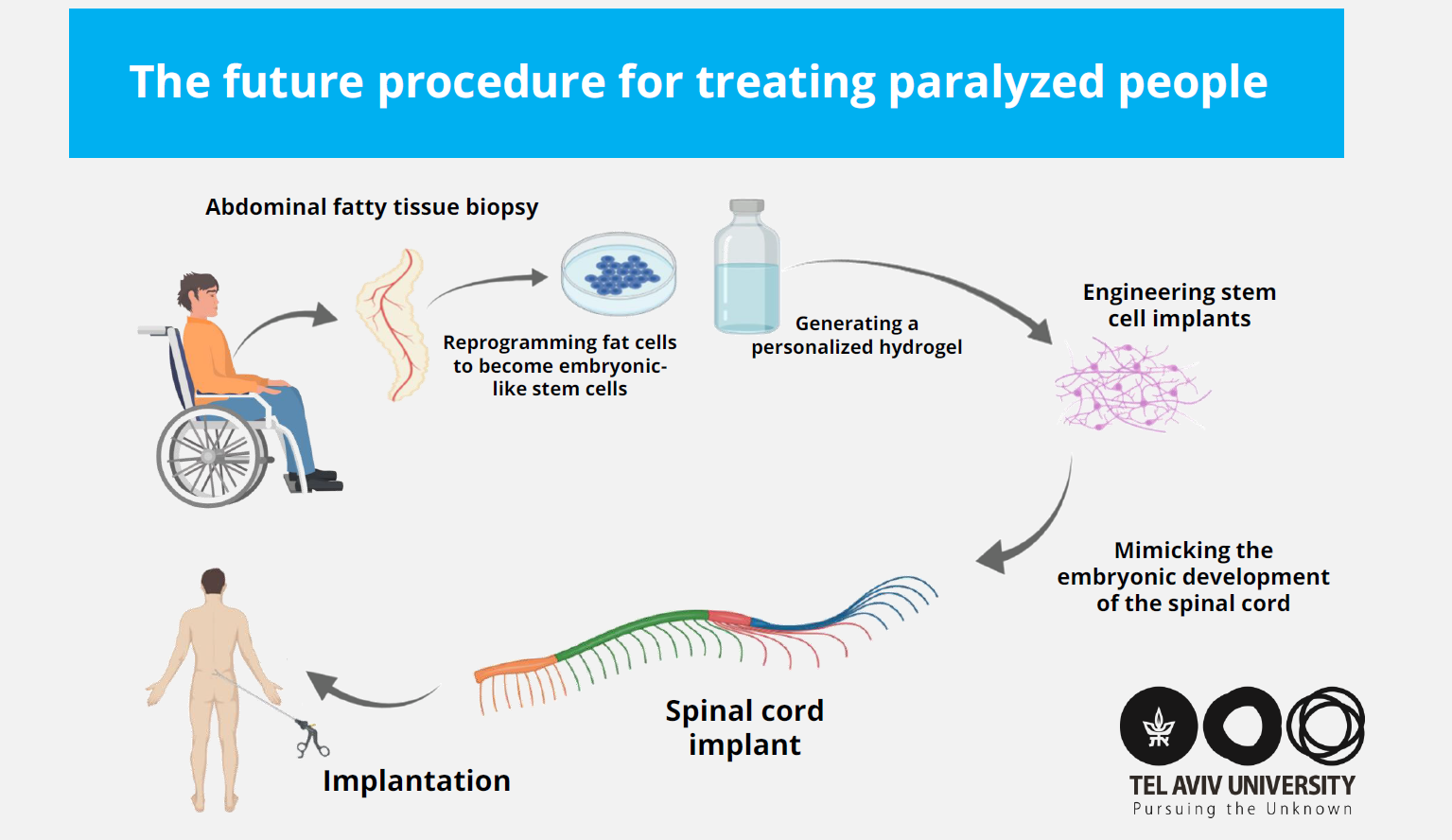 Visualization of the next stage of research being conducted at Tel Aviv University: human spinal cord implants for treating paralysis. Credit: Sagol Center for Regenerative Biotechnology.

Specifically, the researchers engineered functional human spinal cord tissues from human materials (like collagens and sugars) and cells via a process that mimics the development of the spinal cord in human embryos.

“Our technology is based on taking a small biopsy of belly fat tissue from the patient,” explained Dvir. “This tissue, like all tissues in our body, consists of cells together with an extracellular matrix. After separating the cells from the extracellular matrix, we used genetic engineering to reprogram the cells, reverting them to a state that resembles embryonic stem cells—namely cells capable of becoming any type of cell in the body. From the extracellular matrix, we produced a personalized hydrogel that would evoke no immune response or rejection after implantation. We then encapsulated the stem cells in the hydrogel and in a process that mimics the embryonic development of the spinal cord we turned the cells into 3D implants of neuronal networks containing motor neurons.”

The spinal cords were implanted into two types of models: one group had only recently been paralyzed while the other had been paralyzed for the equivalent of a year in human terms. All of the recently paralyzed mice were able to walk again, while 80% of the mice with chronic paralysis regained that ability. 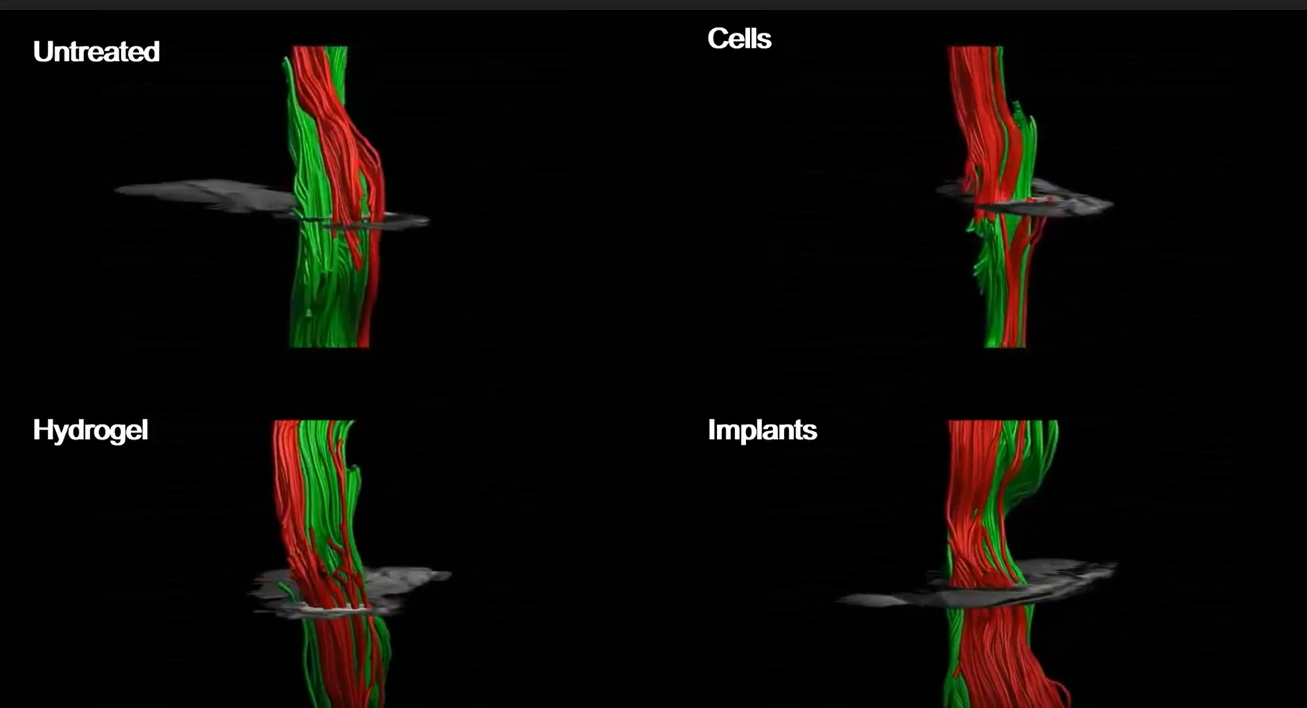 MRI of an injured spinal cord with and without treatment. Credit: Sagol Center for Regenerative Biotechnology.

“This is the first instance in the world in which implanted engineered human tissues have generated recovery in an animal model for long-term chronic paralysis, which is the most relevant model for paralysis treatments in humans,” said Dvir.

The research is also unique because instead of injecting cells that may or may not integrate with the spinal cord, the Tel Aviv team is transplanting already functional spinal cords into the models, Dvir told JNS. Moreover, using materials that come from the patient means that the transplants are personalized and hence less likely to lead to rejection.

Dvir said that he expects a Phase I human trial to take off within the next two-and-a-half years. Five people would be enrolled in the trial.

A company Dvir established in 2019 is already working on making the spinal cord implant treatments according to U.S. Food and Drug Association good manufacturing standards so that they will be commercially available when the science has been verified.

“The company’s preclinical program has already been discussed with the FDA,” said Dvir. “Since we are proposing an advanced technology in regenerative medicine, and since at present there is no alternative for paralyzed patients, we have good reason to expect relatively rapid approval of our technology.”