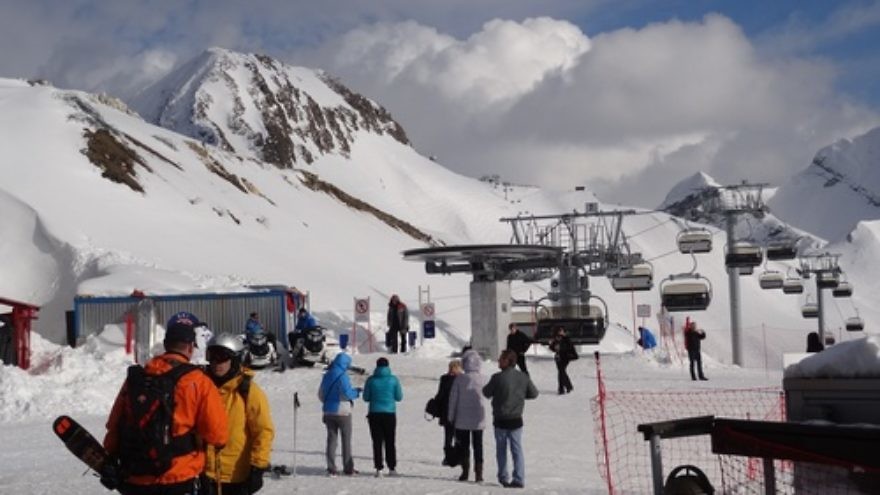 Gornaya Karusel, a sports and tourism area on Mount Aibga in Krasnaya Polyana that will serve as a venue for the 2014 Sochi Olympics, which start Feb. 7. Credit: Ivanaivanova via Wikimedia Commons.
Republish this article
1656 WORDS
Spread the word.
Help JNS grow!
Share now:

With the Winter Olympics underway in Sochi, Russia, the Jewish debate on the games mirrors the discourse taking place in the broader international and athletic communities.

While some Jews say they view the games purely as sport—with social or political issues not factoring into their evaluation—not all can ignore Russia’s controversial “gay propaganda” legislation, political detentions, allegations of Olympic corruption, and the recent terrorist threats against the games.

“I personally don’t plan to attend or follow the games and actively encourage boycotting/not attending the games,” Anya Levitov, managing partner at Evans Property Services in Moscow, told JNS.org. Levitov, who is Jewish, said the various sensitive issues in Russia “make these games anything but an event to follow.”

At the forefront of international criticism leveled at the Russian government in the months leading up to the Sochi games is the country’s recent legislation against “gay propaganda.”

Masha Gessen, a Russian-American journalist and activist who is both Jewish and openly gay, told ABC News that the propaganda law, which was signed by Russian President Vladimir Putin last June, bans the distribution of information that could harm children’s development or encourage them to accept alternative sexual relationships.

“There have already been attempts to remove children from lesbian couples. So, basically, LGBT people [in Russia] have an incredible amount to fear right now, especially if they have children,” Gessen said. Furthermore, while the law itself only bans propaganda, there has been an increase in anti-gay violence around the country.

International Olympic Committee member Gian-Franco Kasper has claimed that as much as a third of the record-high $50 billion price tag for the Olympics has been siphoned off, while Boris Nemtsov, a critic of Putin’s government, told ABC News he has evidence that Russian officials and business executives stole at least $30 billion of the funds meant for Olympics-related projects.

Levitov told JNS.org that the the Olympic sports venues were hastily built and may be hazardous to spectators and players.

“The [Olympic] construction was done by migrant workers, many of whom were sent back home without pay,” Levitov said, adding that growing nationalist and anti-immigrant sentiment has been growing in the country in recent years.

“I do not see serious corruption instances for the moment, but there is a problem with overestimation of construction volumes,” Putin recently told reporters, explaining that some contractors had won tenders due to low bids that they subsequently inflated.

“This price increase, it is sometimes due to contractor’s deliberate acts, and sometimes it is due to the fact that the professional valuation of necessary investments, especially in mountain conditions, for a mountain cluster, are not efficient enough,” he said.

Putin’s presidency has not been associated with the kind of state-sanctioned anti-Semitism that was prevalent during the Soviet era. But Levitov believes that “the rise of state-sanctioned xenophobia and anti-gay hatred… as any intolerance, is ultimately a threat to the Jews.”

But Ivan Kosarev, a Jewish businessman from Moscow, said that since the decision was made to hold the Olympics in Sochi, he fully supports investing money in the major sports competition, and doing so efficiently.

Kosarev told JNS.org he is glad the games are taking place in Russia, and that while corruption around the games should be investigated if it exists, political issues such as the LGBT rights should be discussed separately.

On the other hand, “If I were the Russian president X years ago when they decided to apply for holding the Olympics, I might have not made the same decision but rather invested [the same funds being used for the games] into infrastructure in a more broader sense,” such as railways, airports, and roads, he said.

Like Kosarev, International Paralympic Committee (IPC) Editorial Manager Stuart Lieberman—who will be reporting on the March 7-16 Paralympic Games, which are also taking place in Sochi—disagrees with boycotting the Olympics.

“I don’t think you can be entirely separate from politics [as it relates to the Olympics], but I don’t think you should be avoiding countries for reasons like this,” Lieberman told JNS.org. Part of the value of the games is “to inspire and excite the world, and to instill change in society,” he added.

Sochi’s Chabad-Lubavitch center is preparing to welcome an influx of Jewish athletes and visitors to its 3,000-member local Jewish community. Chabad has acquired two temporary centers that will be staffed by 12 rabbinic interns, and its staff has equipped itself to prepare about 7,000 kosher meals over the course of the games.

Rabbi Ari Edelkopf, the Chabad emissary to Sochi, does not take a political stand on any of the human rights or corruption issues in Russia.

“I view my role in this community as a spiritual one, I’m here to cater to the needs of the Jewish community, as well as to visiting tourists,” Edelkopf told JNS.org.

“It is our goal as an organization that the spiritual and religious needs of those living and visiting Sochi are met, and hopefully expanded,” he said.

Edelkopf did, however, note that the Sochi Jewish community is “in touch with local officials and security experts” regarding safety precautions, in light of concerns that the Sochi Olympics may be a target for terrorist attacks, particularly from Islamist groups in the Northern Caucausus region.

In December, two suicide attacks killed 34 people in Volgograd, about 700 kilometers north of Sochi. An Islamist group from the Caucausus claimed responsibility for the attacks.

Police have started to impose long-planned restrictions of access into and movement within Sochi. Up to 70,000 personnel will be patrolling the games, according to some estimates.

Sam Kliger, the American Jewish Committee’s (AJC) director of Russian Jewish community affairs, told JNS.org that he hopes Russia “will do its best to prevent any attempt of terrorist acts during the Olympics.” A positive sign is that Russia reportedly cooperates with the U.S. on security issues, said Kliger, who also cited rumors that Russian security cooperation with Israel is also on the way.

Levitov, however, questions the publicity surrounding security risks to the games.

“I personally view the widely publicized threats of terrorist attacks simply as a PR effort of Russian authorities,” she said. “It both creates pre-text for further attacks on civil rights, more restrictions on freedom of travel around the Olympic area, and allows for excuses if something does go wrong. Any mismanagement, infrastructural failures or collapsed buildings can be explained by terrorism.”

Mark B. Levin, executive director of the National Conference Supporting Jews in Russia, Ukraine, the Baltic States & Eurasia (NCSJ), told JNS.org that the organization isn’t certain about any specific threats to Jewish people attending the games. But the group has been contacted by some concerned individuals and is directing those people to the U.S. State Department, said Levin.

Like the IPC’s Lieberman, some Jewish groups see the Olympics as a way to promote tolerance and freedom.

“The Olympic Games have the potential to mark a new direction in which there is no discrimination based on race, gender, handicaps or sexual orientation,” B’nai B’rith International said in a statement provided to JNS.org. “The Olympics are a microcosm. While we expect athletes from every nation to have the right to compete fairly, a societal commitment to tolerance and acceptance should be applied to every aspect of society.”

Abraham H. Foxman, national director of the Anti-Defamation League (ADL), told JNS.org that the games provide “a chance to demonstrate solidarity with the LGBT community and to promote democratic ideals.”

ADL is not supporting a boycott of the games but calls for the U.S. to “consider new ways… to lead in the effort to have Russia address (the) anti-LGBT persecution in the same way Jackson-Vanik dealt with Soviet Jews or the Magnitsky law addressed certain human rights violations,” Foxman said.

AJC’s Kliger pointed to Russian President Vladimir Putin’s recent political gestures, such as the releases of oil tycoon Mikhail Khodorkovsky and the members of the Pussy Riot band from prison, as a positive sign for the country ahead of the games.

Kliger told JNS.org he is encouraged by “recent declarations by a number of Russian officials that there will be no discrimination against any group or individual [at the games], including LGBT people, whatsoever,” and other “signals of goodwill coming from the Russian government indicate that Russia is much more interested in conducting the Games in the spirit of sports, peace, and cooperation.”

But Masha Gessen—who recently released her latest book, “Words Will Break Cement: The Passion of Pussy Riot”—told ABC Newsthat “people who have not had the kind of international attention that those people had are remaining in prison… So it’s not a sign of an end to the crackdown.”

“It’s a very transparent and actually a very cynical PR gesture,” she said.

Evans Property Services’ Levitov told JNS.org that the Sochi Olympics are a very important event for Putin and his public image. Since the games are being marketed as Russia’s symbol of strength and prestige among world powers, she believes it is important for the games to show that none of the human rights and corruption issues in Russia belong in the civilized world.

“It would be great if leaders of the world’s leading democracies would demonstrate their position or disapproval openly. I have no hope that the Jewish leaders would, but it would be great,” she said.

NCSJ’s Levin believes that, naturally, “there will be athletes and spectators who will voice disapproval” about controversial issues in Russia, given the “serious differences politically between the Russian federation and the United States or the West.”

But at end of the day, said Levin, the Olympics “always go to the country that’s willing to pay for it.”