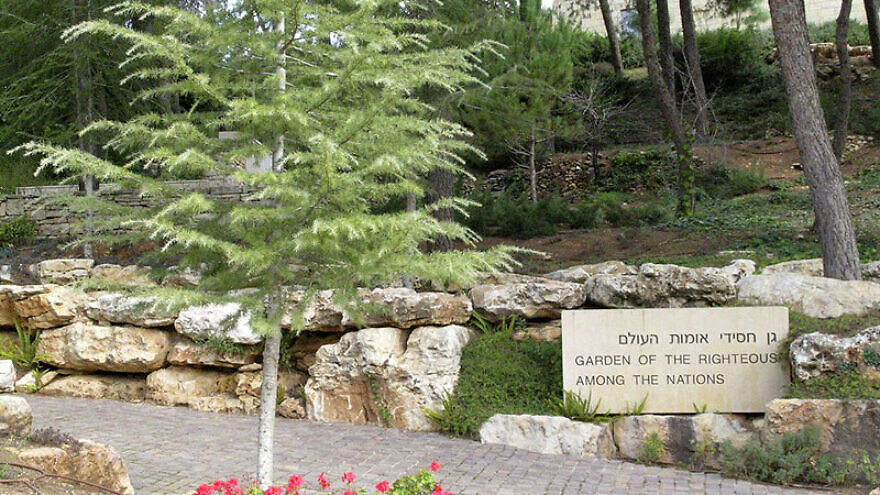 The Garden of the Righteous Among the Nations. Credit: Yad Vashem.
Spread the word.
Help JNS grow!
Share now:

(January 25, 2022 / JNS) The Conference on Jewish Material Claims Against Germany (Claims Conference) has launched a new social-media initiative in partnership with Yad Vashem that highlights the stories of non-Jews who saved Jews from Nazi persecution during the Holocaust.

Righteous Among the Nations is Israel’s highest honor given by Yad Vashem to non-Jews who risked their lives to save Jewish people during the Holocaust, receiving no reward or compensation for their efforts.

The new campaign, called #DontBeABystander: Those Who Risked It All to Save a Life,” aims to have the general public learn more about these rescuers.

In a series of two-minute videos, the campaign spotlights those recognized as Righteous Among the Nations and the dangers they faced to save Jews in German-occupied Europe. The videos examine why the rescuers risked their lives to save Jews, how the events unfolded and impacted their lives, and if they would risk it all again to help Jewish people in need.

Some 28,000 Righteous Among the Nations individuals have been recognized so far, according to Yad Vashem center’s chairman Dani Dayan.

In February 1995, Yad Vashem recognized Andrzej Sitkowski and his mother as Righteous Among the Nations for saving the Kosak sisters, Marion and Hadassa.

Sitkowski said about his family’s efforts to help the Jewish sisters: “In the difficult circumstances, we didn’t say ‘we want to save Jews,’ but it was a coincidence; and in this coincidence, we found ourselves to be menschlich (‘human’). I say to young people not to be indifferent when they see something wrongdoing and you could help. Don’t forget in any situation that you are a human being, and human beings can do much more than you may expect.”