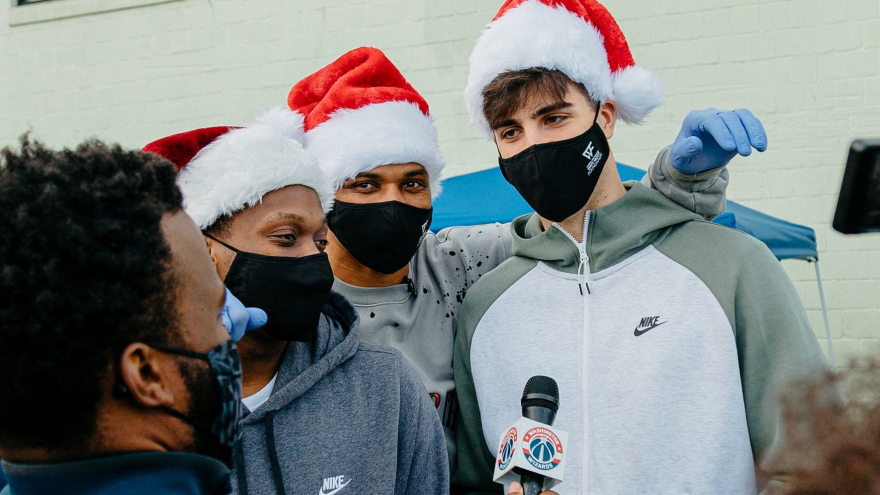 (December 25, 2020 / JNS) Washington Wizards head coach Scott Brooks started Wednesday’s pre-game media session with great news for Israel’s Deni Avdija. The 6-foot-9-inch Israeli forward, drafted No. 9 by the Wizards in the recent NBA draft, would be in the starting lineup in the Wizards’ first regular-season game against the Philadelphia 76ers.

“Deni has done a great job throughout camp. He has shown us a lot,” said Brooks. “I know he is only 19, but he plays with a passion and determination that I like. I like his toughness. It wasn’t a given. He really earned it.”

Avdija was likely a mix of energy and excitement before the game, telling his coach that “it doesn’t seem like a regular game with no fans.” Unlike last season, which took place in the NBA bubble in Florida, teams will play this season in arenas across the country, mostly without a live audience.

Avdija saw a lot of action in his NBA debut. He played 28 minutes and hit two three-point shots for a total of seven points and four rebounds, and made many passes to teammates in his NBA debut. The Wizards held on to a narrow lead throughout most of the game, but the nail-biter turned sour for them. The game was tied at 103 with 1:28 left. Even three-point-shot master Avdija couldn’t turn the game around when he entered for the final time with 42 seconds left on the clock. The Sixers closed out the season opener 113-107.

Brooks was disappointed with the loss though thrilled with Avdija’s performance. “We slipped up in the fourth quarter and gave up 40 points. We turned the ball over so many times—20 turnovers are a lot.” But he’s quick to point out about his rookie, “I thought he was fantastic,” despite some nervousness. “There were some butterflies. He cares, he is passionate, and he wants to do good. I think he played well. He makes winning plays and he cares about winning.”

Avdija denied the butterflies, reporting he “didn’t have any nerves. It is great playing in my first NBA game, regardless of the loss. To complete is a dream come true.”

He told media in a post-game press conference: “I am glad I came from Israel and the whole country is behind me.” He also thanked Israeli fans for staying up until the middle of the night to watch the game, and in Hebrew said, “Thank you, I love you!”

Avdija is already beloved by his teammates; stars Russell Westbrook and Bradley Beal have taken him under their wings. Brooks reports, “Brad and Russell coach him a lot.”

And they certainly seem happy with what they see. Westbrook told reporters that “Deni’s going to be good. My job is to constantly stay on him and challenge him to be great!” Beal has reassured Avdija that he will have “good, bad and in-between games,” before adding, “I like his competitive spirit. He doesn’t back down.” 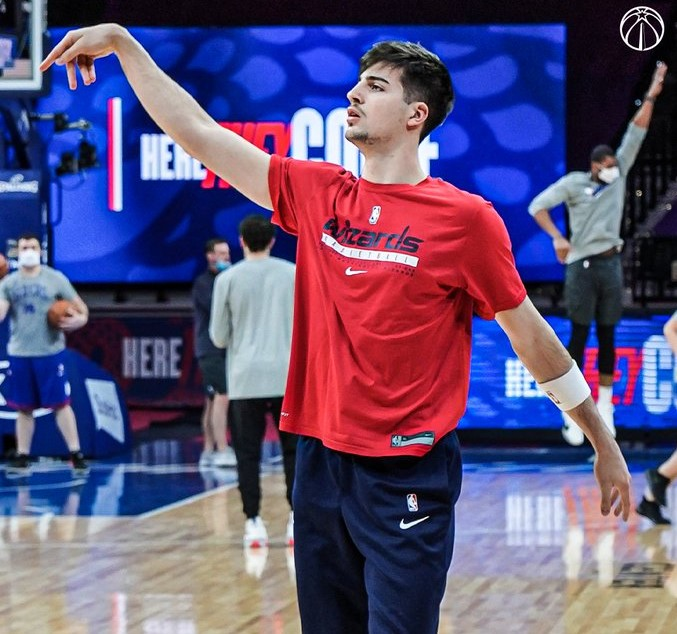 Avdija on the court, December 2020. Credit: Courtesy of the Washington Wizards.

‘Opportunity to give back to the community’

Westbrook is also looking after Avdija’s education off the court. Avdija, who has a Jewish mother and a Muslim father, spent this past Monday after team practice delivering Christmas presents in the local community. Brooks playfully told reporters how Westbrook told Avdija and fellow rookie Cassius Winston: “Take a shower, and let’s go! You guys are coming with me.”

Westbrook notes that “when you get in this league, you need to understand how the community supports the team and how important it is to be able to give back in the difficult times we are in. They are rookies, so it is their first round of community events. I wanted to make sure they had an opportunity to do something and give back to the community.” 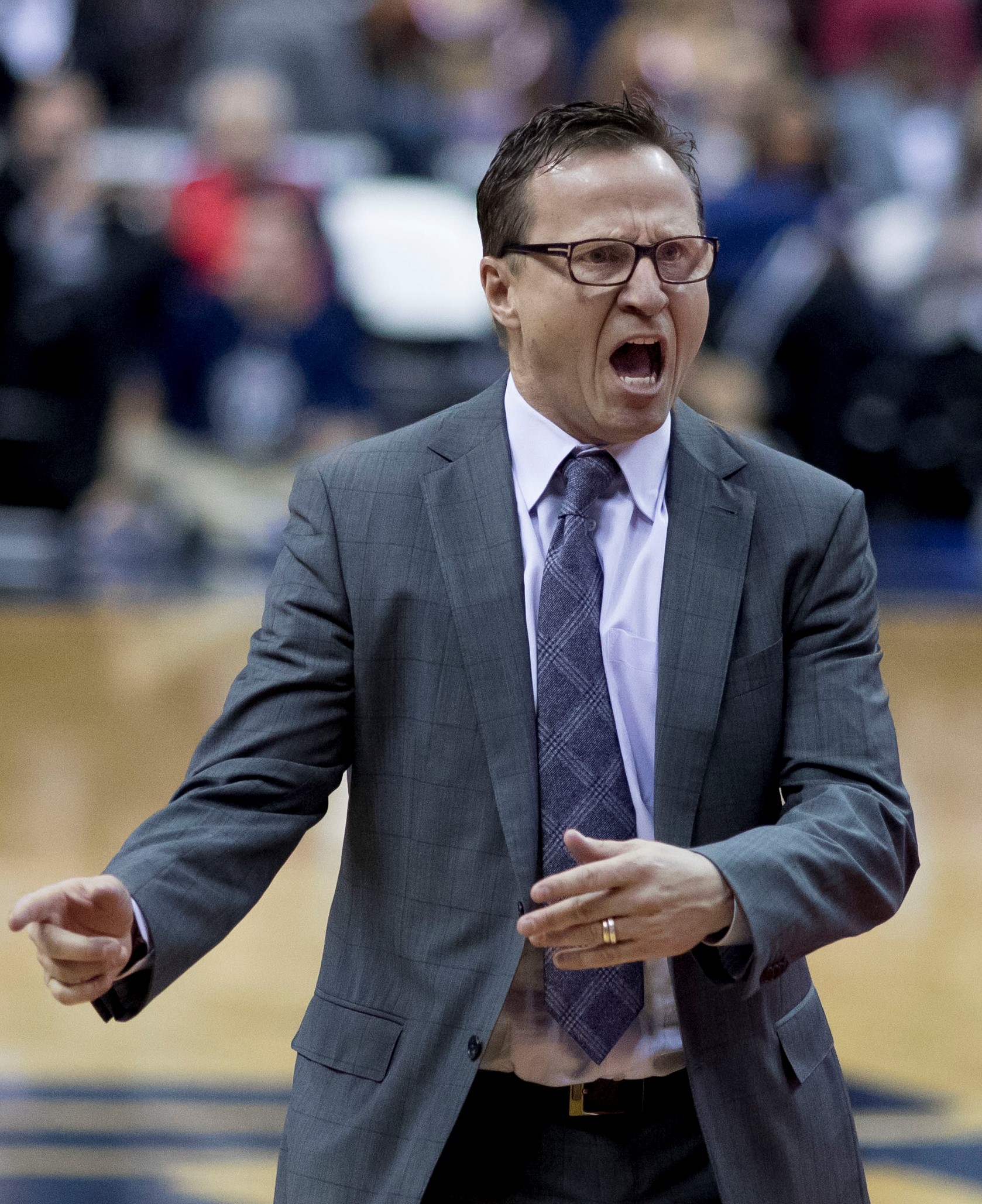 Avdija spoke with reporters in a car while en route to deliver Christmas presents. He spoke candidly about his time in D.C., as well as his teammates. The ongoing coronavirus pandemic, coupled with his personality, has made it difficult to experience his new hometown.

“I am not a party guy and am not going out a lot, but I enjoy having fun,” he relates. “I’m not experiencing it much right now because of COVID. The city is kind of closed. Hopefully, things will go back to normal.”

Still, Avdija is finding ways to experience American culture nonetheless. His first meal in the United States was at Chipotle, and in a playful series of Tweets, the Wizards acknowledged, “Yes, Deni was on Chick-fil-A duty,” purchasing food for his teammates. He is also getting practice driving, though he admits to not yet feeling confident behind the wheel.

And he’s enjoying getting to know his teammates. “Everybody’s good with me,” he says, a bit reluctant to name players he is closest to. When pressed, he added, “I can say two guys came from the same situation as me, Cassius Winston and Anthony Gill. Cassius came from college, and Anthony came from Europe. We need to be there for each other and support each other. I think we’re going to be great friends throughout the season.”

Avdija has so far sung “Happy Birthday” in Hebrew to a teammate and publicly lit Hanukkah candles. He acknowledges “talking a lot about the great things about Israel,” though feels he hasn’t yet “brought my culture” to the fore. He says he hopes to share “food, songs and habits” of Israel with his teammates soon.

For now, the hardworking player will return to practice. As he told Brooks and Westbrook before the recent Christmas event, “I have things to do. I want to do more shooting!”