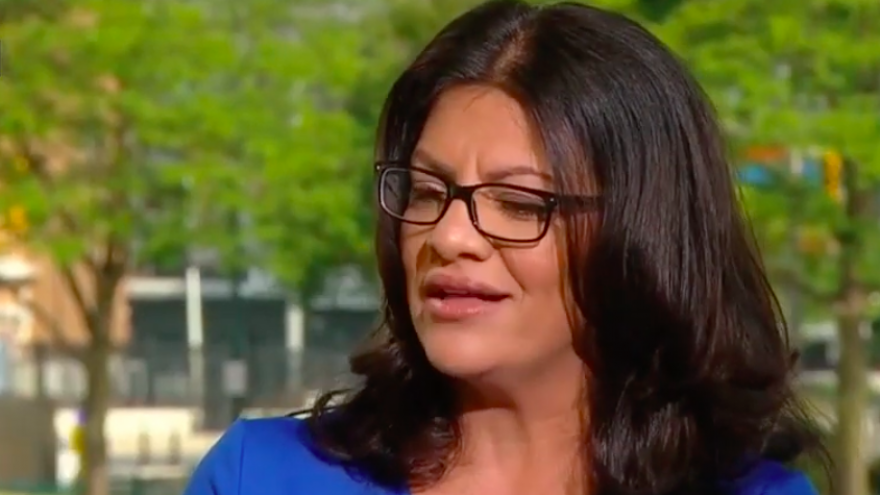 (August 10, 2021 / JNS) The Conference of Presidents of Major American Jewish Organizations denounced recent statements by Rep. Rashida Tlaib (D-Mich.) that seemed to imply that Jews exploit the poor in her home city of Detroit and around the world.

The Conference said on Aug. 6 that it was deeply concerned about the anti-Semitic nature of Tlaib’s comments that she delivered during a video address for the Democratic Socialists of America National Convention.

Tlaib said that as a Palestinian American whose family lives under what she called a military occupation, she saw parallels with the treatment of African-Americans in Detroit.

“I always tell people, cutting people off from water is violence,” she said, “and they do it from Gaza to Detroit. And it’s a way to control people, to oppress people.”

Tlaib said that the exploitation is the results of a structure that she believes oppresses people for profit at the expense of what she called human rights like universal health care, a higher minimum wage and against the fight for a “free Palestine.”

“And I tell people, those same people, that if you open the curtain and look behind the curtain, it’s the same people that make money—and yes, they do—off of racism, off of these broken policies. There is someone there making money,” she said.

The comments set off some outrage on social media, although not as much as recent rhetoric by her colleague, Rep. Ilhan Omar (D-Minn.), where it was pointed out that the conspiracy that Jews are behind oppression all over the world is the same as that peddled by the Nazis.

“In comments linking the situation in Gaza to unrelated conditions in Detroit, she described a shadowy force acting behind the curtains in both places and around the world, controlling a system which is ‘designed by those who exploit the rest of us, for their own profit,’ ” according to a joint statement from Conference president and CEO William Daroff, chair Dianne Lob and vice chair Malcolm Hoenlein. “Through her pointing to the tensions between Israel and Gaza, and saying that ‘they do it from Gaza to Detroit,’ it is clear that Rep. Tlaib is suggesting that the Jews are the uniting factor.”

While most groups remained quiet about the statements, the American Jewish Committee weighed in on Twitter.

“[Tlaib] has once again used an anti-Semitic trope claiming that jews profit from racism in America,” AJC tweeted. “Enough is enough. Rep. Tlaib’s ugly rhetoric must be denounced by all.”

“The impact of [her] remarks is to perpetuate centuries of anti-Semitic tropes,” tweeted Rabbi Jonah Pesner, director of the Religious Action Center of Reform Judaism. “The fight for justice cannot be won by reinforcing anti-Jewish hatred. I call on her to retract these harmful and hurtful words, regardless of her intent.”

Pesner was retweeting another tweet by Anti-Defamation League CEO Jonathan Greenblatt, who said he was stunned to hear those words.

“We’ve heard this kind of ugly anti-Semitic dog-whistling before, but it’s appalling when it comes from a member of Congress,” he tweeted.

Meanwhile, the Republican Jewish Coalition used the remarks to again point to the lack of condemnation from its Democratic counterpart, the Jewish Democratic Council of America, asking them who they thought Tlaib was referring to.