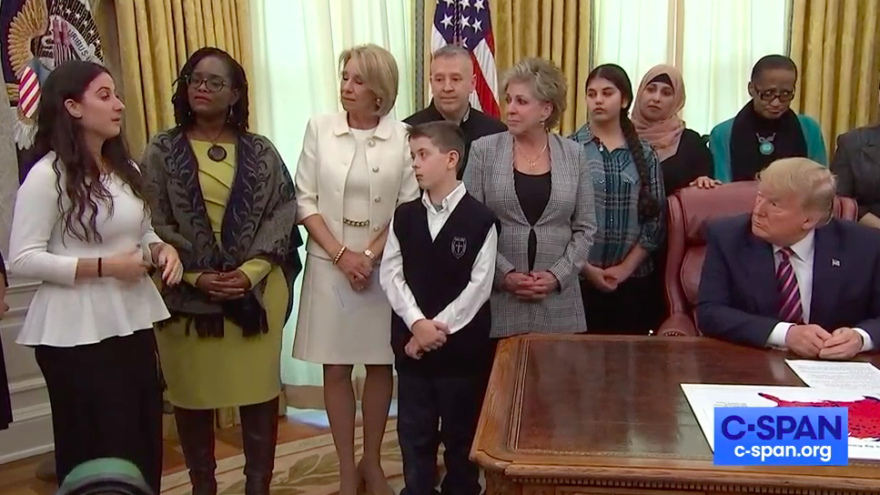 Ariana Hoblin, a Jewish public-school student from Florida, tells U.S. President Donald Trump about being bullied in middle school for her religion. It took place during a ceremony in the Oval Office when Trump signed an executive order to better protect prayer in public schools and federal funds for religious organizations on Jan. 16, 2020. Source: Screenshot.
Spread the word.
Help JNS grow!
Share now:

(January 16, 2020 / JNS) During a ceremony in the Oval Office on Thursday in which U.S. President Donald Trump issued a new guidance to better protect prayer in public schools and federal funds for religious organizations, he heard from a Jewish public-school student from Florida who recalled being bullied in middle school because of her religion.

“In my middle school, I was the only Jewish person and I was very open with my religion,” said Ariana Hoblin. “I would announce when I would have Shabbat plans, which is a day of prayer and rest.”

“When we started our Holocaust unit, it ended with everybody being nice to me because I spoke out about it,” she continued. “And I wanted to inform people, and I wanted to help people learn.”

Hoblin then went to say that “the students started to write swastikas on my belongings, on my arms. I was pushed and shoved in the hallway.”

“They even went so far as to take my face and put it on Anne Frank’s body. And it was sent around to three different schools. I was terrified to say I was Jewish,” she said. “And that should never be in anyone’s mind. Anyone in school should be able to say, ‘I am whatever religion I am. And I practice this and I believe this.’ ”

Hoblin, who identified herself as a junior at Wellington High School in Wellington, Fla., remarked that she has “continuously fought for anyone to have the right to exercise their constitutional rights in school.”

She then expressed her appreciation for the president being supportive of the State of Israel and “for everything that you’ve truly done for all of us.”

When asked by Trump how she’s been treated now at school, Hoblin responded, “My high school is extremely supportive of me. They’ve helped me be a leader in the Jewish community.”

Referring to the executive order, the president said, “Well, this is going to help, too.”