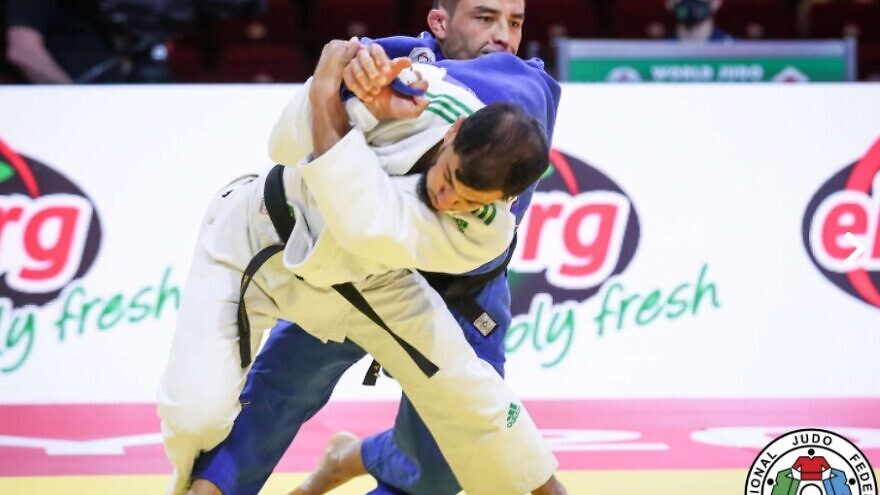 (December 21, 2021 / JNS) UK Lawyers for Israel has reported the Palestinian Judo Federation and its chairman to the International Judo Federation’s (IJF) Disciplinary Committee for honoring an athlete who refused to fight an Israeli opponent.

At the 2020 Olympics in Tokyo, Algerian judoka Fethi Nourine withdrew from a match to avoid fighting an Israeli opponent. As a result of his decision, the IJF issued him and his coach with a 10-year ban from participating in judo activities or competitions. Noutine later announced his retirement from judo and accused the IJF of collaborating with “Zionist terrorism.”

According to Palestinian reports seen by UKLFI, Jihad Uweida, chairman of the Palestinian Judo Federation chairman and secretary-general of the National Committee Against Normalization in Sports, contacted Nourine and told him that the Palestinian organization and the Palestinian embassy in Algeria would organize a ceremony to honor him.

UKLFI said on Monday that it sent a letter to the IJF, explaining that Uweida’s remarks go against the federation’s Code of Ethics, its rules prohibiting discrimination and the Olympic Charter.

“When the IJF banned Fethi Nourine for 10 years for his boycott of Israel, this was in keeping with IJF’s role as an exemplar in fighting boycotts and discrimination,” said UKLFI director Sam Gree. “The attitude of Mr. Uweida and the Palestinian Judo Federation is a challenge to the decision of the IJF and in direct confrontation to the message intended by it. We have asked the IJF to refer Mr. Uweida and the Palestinian Judo Authority to the Disciplinary Committee under the IJF Disciplinary Code.”

Nourine also pulled out of the 2019 World Judo Championships in Tokyo to avoid competition with an Israeli athlete.