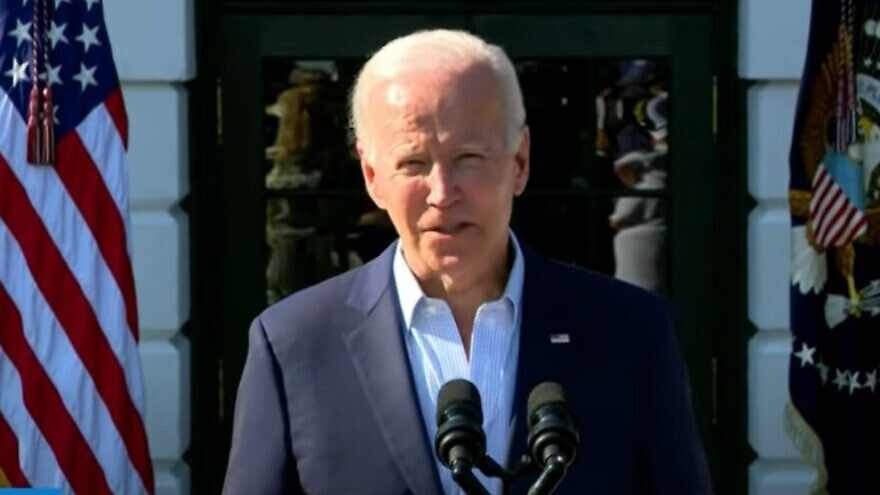 (August 22, 2022 / JNS) U.S. President Joe Biden on Sunday discussed the ongoing nuclear negotiations with Iran during a phone call with the leaders of France, Germany, and Britain, according to a statement released by the White House.

Biden, French President Emmanuel Macron, German Chancellor Olaf Scholz, and British Prime Minister Boris Johnson spoke about the “need to strengthen support for partners in the Middle East” as negotiations in Vienna over Tehran’s nuclear program appeared to be reaching an end-point.

The call comes just days after Iran reportedly dropped its apparent precondition for reviving the 2015 nuclear deal that the Islamic Revolutionary Guard Corps (IRGC) be removed from the U.S. State Department’s list of foreign terrorist organizations.

A senior Biden administration official cited by CNN revealed that Iran’s response earlier this week to a draft nuclear agreement proposed by the European Union made no mention of Tehran’s previously firm position on the IRGC.

“The current version of the text, and what they are demanding, drops it,” the official was quoted as saying. “So if we are closer to a deal, that’s why.”

The Wall Street Journal reported on Aug. 17 that a central tenet of Iran’s response to the “final” nuclear proposal is that guarantees be put in place if the U.S. attempts to again withdraw from the deal, as it did under former President Donald Trump.

“There are three issues that, if resolved, we can reach an agreement in the coming days,” Iranian Foreign Minister Hossein Amirabdollahian last week said, according to Reuters.

“We have told them that our red lines should be respected. … We have shown enough flexibility. … We do not want to reach a deal that after 40 days, two months or three months fails to be materialized on the ground,” said Amirabdollahian.

Meanwhile, Axios reported that U.S. officials have in recent days been seeking to reassure Israel that Washington has not agreed to new concessions to Iran.

“In the current situation, the time has come to walk away from the table. Anything else sends a message of weakness to Iran,” Lapid was quoted by Axios as saying during a meeting with visiting Rep. Ted Deutch (D-Fla.)—chair of the House Foreign Affairs Committee’s Middle East and North Africa subcommittee—and U.S. Ambassador to Israel Tom Nides.

According to local media, Israeli National Security Adviser Eyal Hulata will travel to Washington next week for a series of meetings with U.S. officials that will focus on Iran’s nuclear program.