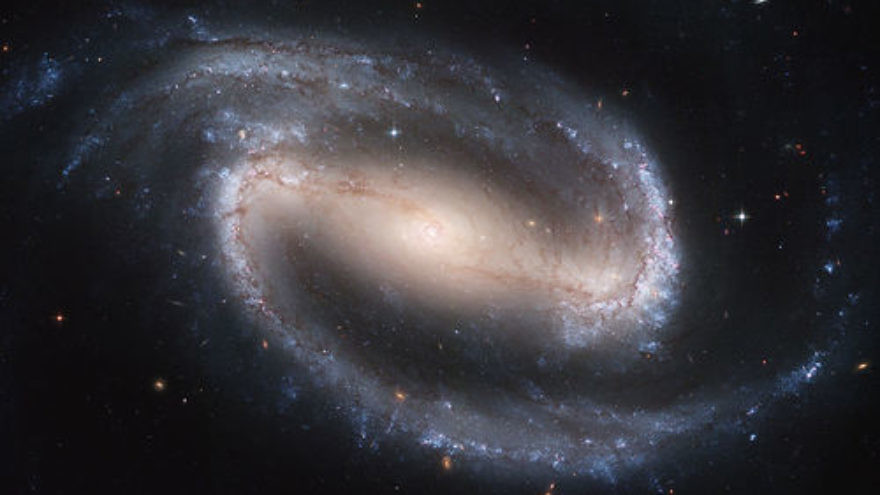 Click photo to download. Caption: NGC 1300, a spiral galaxy, as photographed by the Hubble telescope. Chemist Dr. Andre Danesh writes that ever since the first time he read about Big Bag theorist Alan Guth, he has been interested in discovering what exactly came before the Big Bang. Danesh's conclusion, which he calls the "theory of everything from nothing," affirms the Judeo-Christian narrative that God greater the universe. Credit: NASA, ESA, and The Hubble Heritage Team STScI/AURA.
Republish this article
970 WORDS
Spread the word.
Help JNS grow!
Share now:

“In the beginning, God created the heavens and the earth.” (Genesis 1:1)

These well-known verses mark the beginning of the Old Testament and the story of Creation—which is read in synagogues worldwide this Sabbath, Oct. 10, as the weekly Torah portion of “Beresheit.” God, the scripture says, literally spoke the world into existence. But in our contemporary society, we are also inundated with scientific theories about the world’s origin such as the “Big Bang”—which was elucidated in 1979 by physicist Alan Guth of the Massachusetts Institute of Technology, through his theory of cosmic inflation.

Ever since the first time I read about Guth, I’ve been interested in knowing what exactly came before the Big Bang. Which Creation story should we believe? Can we believe in both the Judeo-Christian scriptural narrative and the Big Bang at the same time?

According to Jewish Kabbalistic teachings, before the universe was created there was “ayin”—nothingness. Once the universe was created, there was “yesh”—something. That leads us to the Creation theory of “yesh me’ayin,” something from nothing, also known in Latin as “ex nihilo.” The Kabbalistic interpretation of the Creation story is echoed by traditional Christian teachings. From my decades of work as a chemist, along with my Jewish faith, I have come to believe in my own version of this Creation narrative: the theory of “everything from nothing.”

At the origin of the universe (or universes), there was only air without dark energy, dark matter, and any protons, neutrons or electrons. Let’s call it “pure air.” The radius of each universe was expanding to many millions of miles. The universes were moving up and down, and in multiple directions. Some of these directional patterns could have been ellipses and spirals. Based on the different directional patterns, varying temperatures were created. When these universes of varying temperatures and directions collided, the result was the Big Bang. This collision produced temperatures of a few trillion degrees and then began to cool. The cooling process created dark energy, dark matter, protons, neutrons, electrons, stars, and planets.

In the second scenario, there was only one universe—Universe A. It was moving and expanding at the rate of 25-300 km/second. At some point, it grew too large and divided into two universes, “Universe A1” and “Universe A2.” After a certain amount of time, Universe A1 began to slow down. Meanwhile, Universe A2 continued moving and expanding at a much higher speed. At a certain point, the two universes collided and caused the Big Bang.

This phenomenon is similar to the weather patterns we have on Earth, but on a much larger scale. Take, for example, when cold air comes down from Canada (north of the U.S.), travels south, and collides with hot air from the Caribbean. This collision, from air patterns with a radius of only a few hundred miles, can generate powerful storms. Understandably, when the radius of pure air is many millions times larger than the collision of Canadian and Caribbean air, we can see how the Big Bang occurred.

I believe that the universes were created with a mini bang, then a small bang, then a big bang, and then a super bang. As Albert Einstein believed, the universe is ageless and eternal. As such, I believe universes will continue to be created, with many more bangs to come. New galaxies will be born.

The Judeo-Christian concept of “something from nothing” is limited to only “something,” which might be just a few things. But “everything” covers just that—everything, this universe and all other possible universes. I believe that God created everything, not just something, from nothing.

Why God? That question can be answered with more questions. What happened before the Big Bang? If Creation wasn’t God’s doing, then how else did it occur? Until you prove to me how the universe was created, you have no choice but to accept that God was the creator and to affirm the Judeo-Christian narrative on Creation.