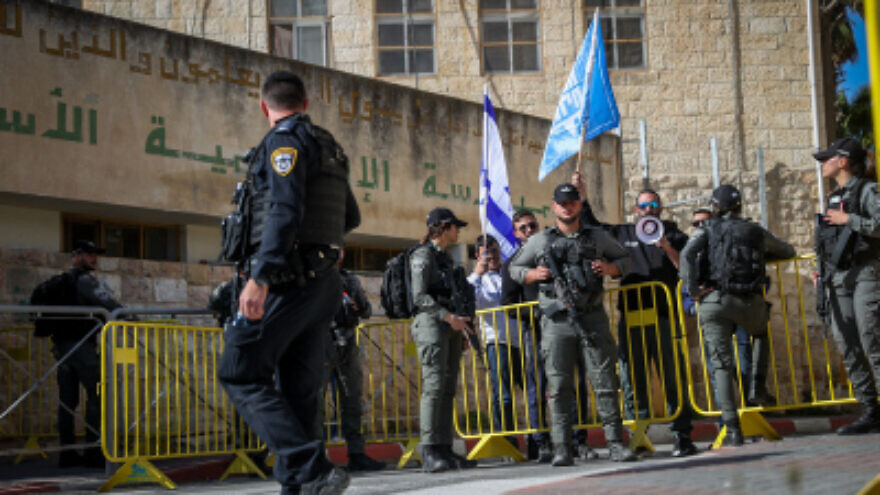 Tzipi Schlissel, the author of “Hebron Breaks the Silence: Personal, Historic and Political Documentation” and a resident of the city, said that the goal of some left-wing Israeli organizations is to do away with the Jewish character of the state.

“This can be seen in their funding sources and the Durban Conference [the U.N.’s World Conference against Racism, known as Durban I], which assembled in 2001 and prepared the framework for war on Israel by generating delegitimization through NGOs,” she explained.

For example, the NGO Breaking the Silence, which presents mostly anonymous testimonies, allegedly from soldiers, “portrays IDF soldiers as war criminals to the rest of the world,” Schlissel said.

A Givati Brigade infantryman who was accosted by left-wing activists in Hebron and disciplined for taunting them had his sentence reduced from 10 days in military prison to six last week.

Meanwhile, two Israelis who were part of the group harassing the IDF troops in Hebron were placed under five days’ house arrest and instructed not to return to the city for two weeks after being questioned on suspicion of assault and disturbing the peace.

Yishai Fleisher, the local spokesperson for the Hebron Jewish community, told JNS, “The radical left is telling the jihadists that now is the time to attack Israel.”

“They must prove their theory that only the Left can bring peace and disprove the Right’s theory that peace can only come through strength. They seek, right from the outset, to delegitimize the new national government. Therefore, we can expect a period of Left-wing friction and Jihadi violence as this government gets going.” said Fleisher.

He added that the left-wing activists are choreographing these provocations of Israeli soldiers to promote their agenda.

Schlissel describes how she moved to live in Hebron after her father, Rabbi Eliyahu Shlomo Raanan, known to all as Rav Shlomo, was murdered by an Arab terrorist who entered his house via a window and slaughtered him with a knife in 1998.

“I was astounded to observe the scope of the activity of left-wing organizations and international antisemitic organizations in Hebron,” she said. “I discovered that an entire business is dedicated to slandering Israel” and portraying Arab terrorists as victims.

The activists harass soldiers or civilians and then film their reactions. They then distribute the video globally to promote anti-Israel propaganda, Schlissel said.

“This is one of the reasons I wrote the book, which contains first-hand accounts of what is going on in Hebron. Moreover, it is a convenient location for these activists since they can operate under the safety provided by IDF soldiers whom they disparage,” she continued.

The issue goes beyond harassment, Schlissel said. “Israel must recognize that these organizations are agitating and acting against it. If the state is to survive, the actions of anti-Israel organizations must be halted,” she continued.

Far-left groups are training “anarchists” in how to interfere with soldiers, Peleg said.