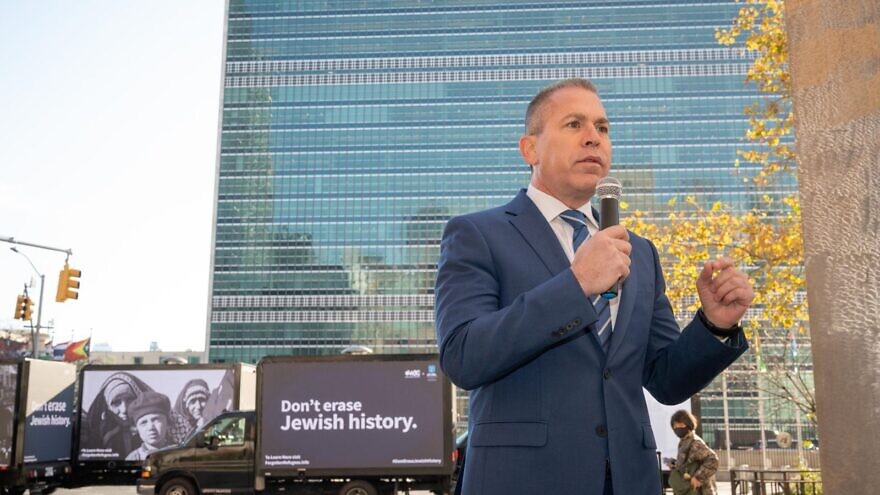 (November 29, 2021 / JNS) Israeli Ambassador to the United Nations Gilad Erdan, along with the World Jewish Congress, blasted the United Nations for its annual “Palestine Day” while ignoring the expulsion of Jews from Muslim countries.

“On Nov. 29, exactly 74 years ago, the U.N. recognized the Jewish people’s right to a state. The Jews and Israel accepted this partition plan, and the Palestinians and the Arab countries rejected it and tried to destroy us,” said Erdan. “The Palestinians and the Arab countries not only attacked Israel, the Jewish state, they also persecuted, massacred and ultimately expelled the Jewish communities in their own countries. Shockingly, this atrocity is completely, completely ignored by the U.N.”

As part of the campaign led by Erdan and the WJC, trucks carrying signs arrived at the U.N. headquarters and showed those entering the building pictures of Jewish refugees being expelled from Arab countries and Iran, along with a demand to stop erasing Jewish history.

“The situation in the Occupied Palestinian Territory remains a challenge to int’l peace & security,” tweeted U.N. Secretary-General António Guterres on Sunday. “On #PalestineDay, let’s reaffirm commitment to the Palestinian people in their quest to achieve their rights & build a future of peace & dignity for both Palestinians & Israelis.”

Erdan said that the world body has “the audacity to hold a solidarity event for the Palestinians on the anniversary of the Palestinians’ own decision to choose violence. And on the day that the Palestinians chose violence, the U.N. also dares to advance the outrageous, the false ‘demand of return’—a demand that would lead to the total obliteration of the Jewish state.”