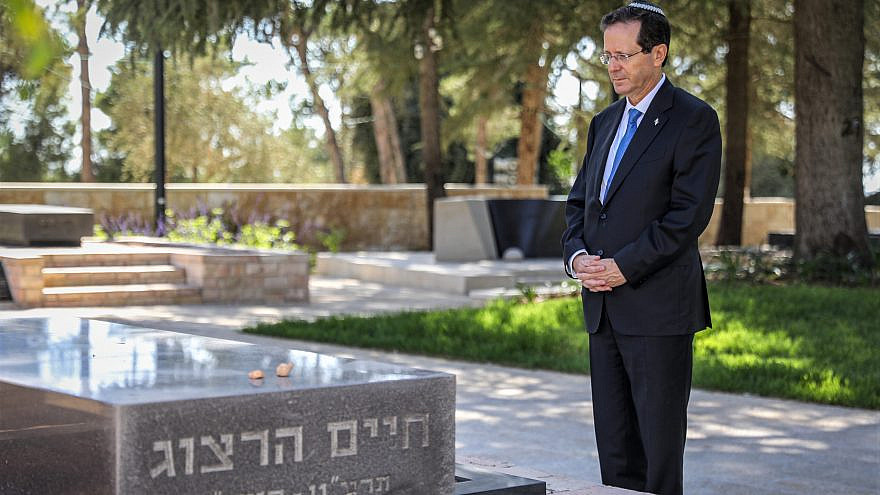 (June 2, 2021 / JNS) Jewish leaders in the United States and elsewhere welcomed the election of Isaac Herzog as Israel’s next president, with most praising his deep understanding of the worldwide Jewish community.

“I cannot think of a better or more able representative of the State of Israel and the people of Israel—Jews and Arabs, religious and secular,” said World Jewish Congress president Ronald S. Lauder.

Noting Herzog’s family history—his father, Chaim Herzog, a general in the Israel Defense Forces, served as Israel’s sixth president; and his grandfather, Yitzhak HaLevi Herzog, served as the chief rabbi of Ireland, and later, following Rabbi Abraham Isaac Kook, the Ashkenazi chief rabbi of Israel—Lauder said that Herzog “brings to this new position the dignity and depth of a true statesman.”

“Following on his distinguished service as chairman of the Jewish Agency for Israel, Isaac Herzog brings to the Israeli presidency a profound understanding of and appreciation for the mosaic that is world Jewry in its glory and diversity,” said Lauder.

Herzog, 60, was elected by a secret ballot in the Israeli Knesset on June 2 with 87 votes of the body’s 120 members. He defeated Miriam Peretz, a social activist and former winner of the Israel Prize.

“We know how committed he is to Israeli democracy, and to strengthening the social and moral fabric of the state.”

The position is largely ceremonial; however, the president does play a key role in deciding who gets the mandate to form a government following elections, as well as the power to pardon people and grant clemency. Herzog, who will step down from his role as head of the Jewish Agency, formerly served as a member of the Knesset for the Labor Party between 2003 and 2018, and opposition leader from 2013 to 2018.

“It is with great pride that I congratulate the next president of Israel, our chairman of the executive Isaac Herzog,” said Michael Siegal, the Jewish Agency’s chairman of the board of governors. “His unwavering dedication to the Jewish people and to serving the State of Israel is an inspiration, and we will all undoubtedly continue to benefit from his leadership.”

“We wish President-elect Isaac Herzog much success in fulfilling the duties of this high office, which is vital to the well-being and standing of Israel in the global community,” said AJC CEO David Harris.

“He brings enormous assets to the position, including an unusually deep understanding of world Jewry, including the American Jewish community. It is vitally important that Jews—whether in Israel or elsewhere—feel connected to, and welcomed by, the office of Israel’s president. In that spirit, as we have with each president since the state’s rebirth in 1948, we look forward to working closely with Mr. Herzog after he takes office on July 9.”

Similarly, the Israeli-American Council said that it hopes Herzog “will build on his experience working with Diaspora Jewry and the Israeli-American community to strengthen their bonds with the State of Israel, and deepen the connection between the American and Israeli people.”

Hoping the new president can ‘advance the cause of peace’

The Orthodox Union also welcomed Herzog’s election, noting the key role that the Israeli president plays in relations between Israel and American and other Diaspora communities.

“Throughout his many years of service in the Knesset, to Israel and in the Jewish Agency, Mr. Herzog has become known for his respectful, soft-spoken manner and for eschewing partisan rancor and feuding,” said Orthodox Union president Moishe Bane.

“He will undoubtedly represent the best of Israel, both within and beyond its borders, and we look forward to working with him during what is sure to be a successful tenure,” said Dianne Lob, Chair, William Daroff, CEO, and Malcolm Hoenlein, executive vice chair of the Conference of Presidents of Major American Jewish Organizations.

“Not only is he a long-standing friend and adviser to CAM, but for many years he has been one of the strongest and most powerful advocates for the Jewish people and against anti-Semitism globally,” said its director, Sacha Roytman-Dratwa. “No doubt, he will continue to proudly advocate for Jewish rights and wider tolerance as president. He will no doubt represent Israel and the Jewish people as a whole with great distinction.”

The progressive group Americans for Peace Now urged Herzog to use his position to advance the cause of Israeli-Palestinian peace.

“We know how committed he is to Israeli democracy, and to strengthening the social and moral fabric of the state, as well as strengthening its relations with Diaspora Jewry and the international community,” said APN’s president and CEO Hadar Susskind. “We also know how committed Herzog is to the vision of peace between the State of Israel and a future viable Palestinian state. We hope he will use his position as Israel’s next president to advance the cause of peace and strongly urge him to do so.”

Similarly, J Street said it hopes that Herzog will help “strengthen Israeli democracy, reinforce the relationship between Jews globally and the State of Israel, and promote a vision of peace and equality.”