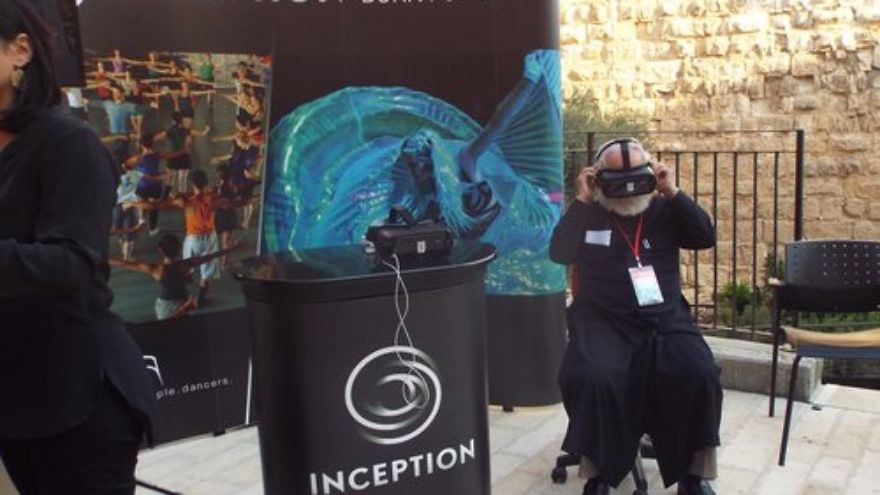 One of Jerusalem’s most iconic tourist sites is deploying futuristic technology to blend the past and the present, placing it at the vanguard of a revolution in museum experiences.

In October, the Tower of David Museum of the History of Jerusalem hosted an event featuring a forthcoming Innovation Lab that’s a showcase and incubator for the kind of interactive high-tech that museums need to remain relevant for visitors.

The lab—housed in the Pasha Hall, one of the rooms of the Phasael Tower, built by King Herod 2,000 years ago—will offer workspace, equipment and a real-time beta site for a constellation of Israeli virtual reality (VR) and augmented reality (AR) start-ups, providing content and support as well as a test market for their products. The initiative is sponsored by JNext, a joint project of the Jerusalem Development Authority, Israel’s Ministry of Jerusalem and Diaspora Affairs, and the Jerusalem municipality.

One of the start-ups, Inception VR, launched its Tower of David VR experience on Oct. 25. (The full Innovation Lab opens to the public on Jan. 1, 2018.) Visitors can navigate around an interactive map of the site and explore the medieval fortress with one of its previous residents. A Crusader knight guides you to locations around the citadel, explains the history of surrounding landmarks using 3D models and weaves his personal story into the narrative. The Inception app is available across many platforms, including Oculus Rift, HTC Vive, Microsoft MR, Samsung Gear, Google Daydream, iOS and Android.

“The Tower of David is another way we are working to give people a chance to experience something they couldn’t anywhere else. Combining the past with the present allows users to experience the centuries-old site like never before,” says Inception CEO Benny Arbel.

Devora Mason, director of the Innovation Lab, praised Inception as “leaders in capturing the essence of the story and sharing it using high-end VR technology. The story of Jerusalem both past and present and future all come together under one roof, in one courtyard and in one virtual center of the universe through the creation of this VR experience.”

The Tower of David Museum—a complex near Jaffa Gate that includes an archaeological garden, exhibition halls, panoramic views of Jerusalem, Herodian pools, secret passages, towers and turrets—might seem like an unlikely venue for cutting-edge technology. But that’s part of the rationale for the project.

“The future of museums is a global issue,” notes Caroline Shapiro, the museum’s director of international Relations. Visitors want to own their experience, she adds, and the key is innovation.

Tower of David Museum Director Eilat Lieber explains, “We need the right technology to bring the stories to life and to make the stones speak again.”

Then-Jerusalem Mayor Teddy Kollek initiated the museum more than 30 years ago to recount the history of the city, and today the site hosts around 400,000 visitors per year. Those visitors make the museum a perfect testing ground for VR and AR start-ups, according to Devora Mason, director of the Innovation Lab.

“The museum is an experimental lab,” she says. “It’s the perfect place for companies that are looking to test new technologies developed to enhance visitor experience, whether at a museum, heritage site or tourist center.”

The launch of the Innovation Lab is part of an upgrade of the Tower of David Museum that will double the area of the facility at an estimated cost of $30 million.

In mid-October, more than 20 Israeli AR and VR companies demonstrated their products on the grounds of the 2,000-year-old citadel.

Ori Noam of MARstorytelling showed off the company’s “Jerusalem Awakens” app, which features a mixed reality journey through the streets of the Old City where historical figures, structures and battles come alive all around the users, allowing visitors to interact with ancient characters while “time traveling” through key historical moments. The content is based on material from the museum. Noam, a former film director, sees the collaboration with the museum as an opportunity for MARstorytelling to be “in the frontier of content.”