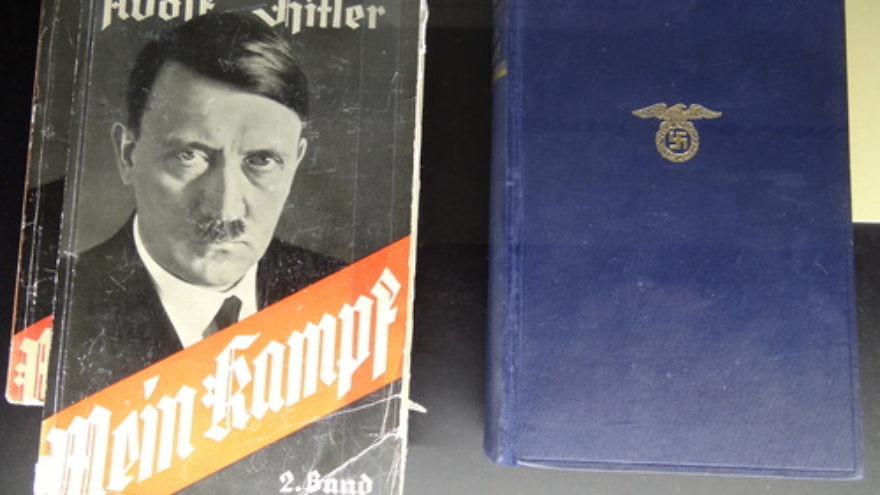 (April 9, 2015 / JNS) Given the current climate of rising anti-Semitism in Europe and elsewhere, is it too offensive and dangerous to reissue Adolf Hitler’s “Mein Kampf” autobiographical manifesto? Critics of the book’s planned republication say yes. But others believe that with the proper annotation and commentary, the book can be an important learning tool.

When “Mein Kampf” (translated in English as “My Struggle”) was first published in 1925, it sold poorly. Next year, a new edition will go on sale in bookstores in Germany for the first time in 75 years. The state of Bavaria has owned the German copyright to the book and has legally blocked attempts to print it. The copyright expires this December, and the Munich-based Institute for Contemporary History (IfZ) plans on reissuing an annotated version of “Mein Kampf” full of criticism and analysis that will stretch its original size from 700 pages to nearly 2,000.

IfZ is regarded as the world’s leading institute for the research of National Socialism—also known as Nazism. Founded after World War II, the institute has the goals of examining how National Socialism took root in Germany and understanding the reasons behind the pre-Hitler failure of German democracy.

As far as “Mein Kampf” goes, its text is widely available even without IfZ’s new edition.

“The book was printed in its German version in more than 12 million copies,” Magnus Brechtken, deputy director of IfZ, told JNS.org. “Many hundred thousands of these copies have survived the Third Reich and are available in academic libraries and antiquarian bookshops. The German text is also available through the Internet. The copyright of the English translation was sold in the 1930s and the book has been in print ever since. The English version has been constantly available all over the world.”

Though the copyright expiring at the end of this year prevents the republication of “Mein Kampf,” it has “no influence on the given availability of the text,” according to Brechtken.

“It is an open question whether or not the end of copyright will make any difference to the availability of the text,” he said. “Should there be re-publications of the original text without any comments, it is even more urgent to have a critical edition which is based on the current research knowledge on the origins of National Socialism and the Third Reich, to deconstruct the ideological theories of the book and its racist agenda to prevent further misinformation.”

Some Jewish leaders have expressed concern about the reissuing of “Mein Kampf” amid the uptick in global anti-Semitism. Levi Salomon, a spokesman for the Berlin-based Jewish Forum for Democracy and Against Anti-Semitism, told The Washington Post, “I am absolutely against the publication of ‘Mein Kampf,’ even with annotations. Can you annotate the Devil? Can you annotate a person like Hitler? This book is outside of human logic.”

Ronald S. Lauder, president of the World Jewish Congress, wrote in a letter to The New York Times, “Because of Germany’s history, publishing it there again at a time of rising anti-Semitism would be a travesty. Only recently, Germany elected a neo-Nazi deputy to the European Parliament, showing that the Hitler virus has yet to be stamped out.”

“What would the Holocaust survivors and their relatives think if they visit a German bookstore and see Hitler’s book on the shelves?” added Lauder. “We must do everything we can to prevent the publication and mass distribution of ‘Mein Kampf.’ We owe it to Hitler’s victims.”

But Dr. Jürgen Matthäus—director of applied research at the United States Holocaust Memorial Museum’s Jack, Joseph and Morton Mandel Center for Advanced Holocaust Studies—agrees with IfZ’s Brechtken. Speaking as an expert on Nazi propaganda and not as a representative of the museum, Matthäus told JNS.org that the reissuing of “Mein Kampf” might have a fairly minimal impact on readership.

“Those who have a right-wing philosophy have access to ‘Mein Kampf’ anyway,” Matthäus said. “My hope would be, and I hope also the hope of those putting the new edition together in Germany, that the general public would be aware of the additional context that would be taken into account. The general readership would benefit from this [new] critical edition by finding out more about the context in which this document emerged, and also the context that is needed to understand it properly.”

To understand “Mein Kampf,” experts say, it is important to understand its author. Matthäus and Brechtken agree that one of the most definitive books on the subject is “Hitler: A Biography,” by Ian Kershaw, a modern history professor emeritus at the United Kingdom-based University of Sheffield who was given the German award of the Federal Cross of Merit in 1994.

“By then,” Kershaw wrote, “he had developed a philosophy that afforded him a complete interpretation of history, of the ills of the world, and how to overcome them. Tersely summarized, it boiled down to a simplistic, Manichean view of history as racial struggle, in which the highest racial entity, the Aryan, was being undermined and destroyed by the lowest, the parasitic Jew.”

Many of Hitler’s contemporaries “made a mistake in treating ‘Mein Kampf’ with ridicule and not taking the ideas Hitler expressed there extremely seriously,” Kershaw explained.

“However base and repellent they were, they amounted to a set of clearly established and rigidly upheld political principles,” he wrote.

Kershaw actually started his career as a historian at IfZ. Known as a “structuralist”—in line with the theory of humankind in which all elements of human culture, including literature, are thought to be parts of a system of signs—Kershaw sees the structures of the Nazi state as far more important than the personality of Hitler (or any other individual) in explaining the way Nazi Germany developed. In particular, Kershaw subscribes to the view adopted by the German historian Hans Mommsen that Nazi Germany was a chaotic collection of rival bureaucracies in perpetual power struggles with each other. In Kershaw’s estimation, the Nazi dictatorship was not a totalitarian monolith, but rather an unstable coalition of several blocs in a “power cartel” comprising the Nazi Party,  big business, the German state bureaucracy, the army, and the SS police. Each of the “power blocs,” according to this view, were divided into several factions.

But for some whose primary concern is contemporary anti-Semitism, such historical details are not the point in any discussion of “Mein Kampf.” Charlotte Knobloch, head of the Jewish community in Munich, told Time magazine, “This book is most evil; it is the worst anti-Semitic pamphlet and a guidebook for the Holocaust.”

Asked to address criticism of the book’s reissuing, Brechtken told JNS.org, “We understand and respect the feelings and views of those who have suffered as victims of National Socialism, and we respect their feelings of uneasiness and concern at the thought of seeing the text being republished.”

“The text is a historical source which must be analyzed to understand the link between the formulation of anti-Semitism before 1933 and anti-Semitic political actions after 1933,” he said.
“It is important to analyze this historical text to deconstruct the myths which produced anti-Semitism at the time, to deconstruct racist worldviews in general, and to prevent racist ideologies from ever coming close to political power again. With a critical edition as the IfZ currently works on we assume to aim for the same overall objective—to fight racism and anti-Semitism.”

Matthäus argued, “Like any other document that pertains to this piece of history, there is a need for [‘Mein Kampf’] to be out there, to be researched, and to be acknowledged.”

“What is missing is the critical engagement of [‘Mein Kampf’] by scholars who know the history and can put that in the right context,” said Matthäus. “The worst thing that can happen is to put this into the poison cabinet and make it inaccessible and prohibit the use of it, and thus create, or enhance, the myth that this is something that the establishment, or these evil powers or conspiratorial forces, don’t want the general public to see.”