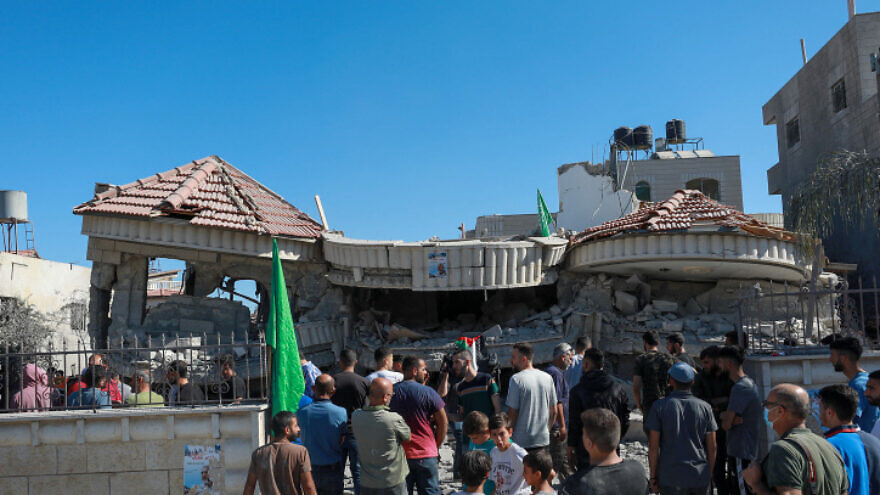 Palestinians stand near the ruins of the house of accused terrorist Muntasir Shalabi in the village of Turmus Aya, northeast of Ramallah, after it was demolished by the Israeli army, July 8, 2021. Photo by Flash90.
Spread the word.
Help JNS grow!
Share now:

(July 15, 2021 / JNS) Israeli security forces arrested dozens of Hamas activists on Wednesday near the village of Turmus Aya in Judea and Samaria, the Israel Defense Forces said in a statement.

The suspects, according to the IDF—members of Hamas’s student cell at Birzeit University near Ramallah—were taken into custody shortly after a solidarity visit to the family home of Muntasir Shalabi in the village, according to the Palestinian daily Al Quds.

Shalabi, 44, is accused of killing 19-year-old yeshivah student Yehuda Guetta in a drive-by shooting on May 2 at the Tapuach Junction in Judea and Samaria. Two other Israelis, Benia Peretz and Amichai Chala, were also injured in the attack—Peretz seriously.

“Some of the apprehended terror operatives were directly involved in terror activities, including money transfers, incitement and the organization of Hamas activities in Judea and Samaria, and have been transferred to security forces for further questioning,” the Israeli military said in a statement.