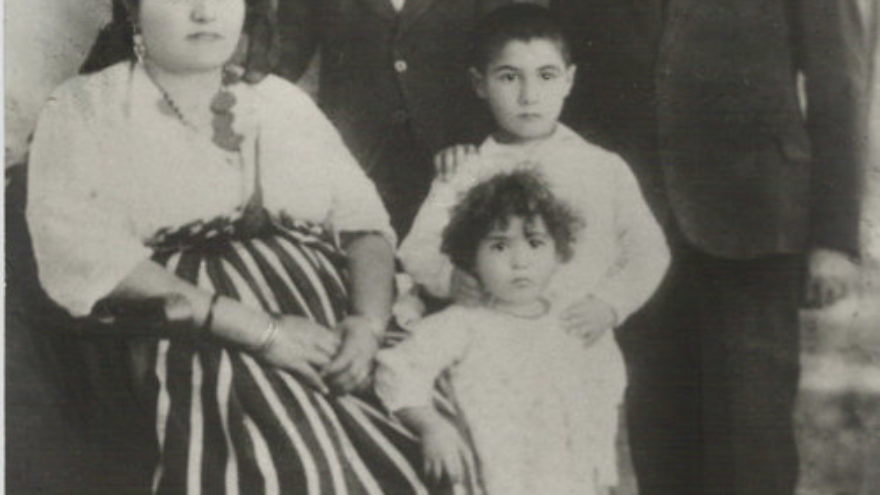 Click photo to download. Caption: Prof. Maurice Roumani's grandparents and other family members from Libya, pictured in the late 1920s. Members of Roumani's extended family in Libya endured everything from expulsions, to a 1,200-mile trek through the Saharan desert, to deportations to the Bergen-Belsen concentration camp. Credit: Courtesy Prof. Maurice Roumani.
Republish this article
854 WORDS
Spread the word.
Help JNS grow!
Share now:

(March 19, 2014 / JNS) Although the commemoration of Yom HaShoah focuses primarily on the ghettoes and death camps in Europe, the persecution of Jews in North Africa and the Middle East during the Holocaust has gained increasing attention in recent years. For Ben-Gurion University professor Maurice Roumani, a scholar of the history of Jews in Arab countries, the subject has a personal dimension as well: members of his own extended family in Libya endured everything from expulsions, to a 1,200-mile trek through the Saharan desert, to deportations to Bergen-Belsen.

Dr. Roumani is this year’s Schusterman Visiting Professor of Political Science at George Washington University, in Washington D.C. He spends his spare time doing research on the history of North African Jewry.

The Roumani clan, numbering several dozen families throughout Libya, was one of the oldest Jewish families in Benghazi. Prof. Roumani’s father was a successful merchant. Libya had been an Italian colony since 1911, and life for its 20,000 Jews was not significantly affected by the rise to power in Italy of Benito Mussolini and his Fascist Party in 1922. The “Racial Laws” that were decreed in Italy in 1938 at first were not strictly enforced in Libya.

As Italy drew closer to Nazi Germany in World War II, the Libyan colonial authorities began acting against the local Jewish communities. In the summer of 1942, Jews holding Libyan citizenship were interned in forced labor camps. In the Giado camp alone, nearly 600 of the Jewish internees died from typhus or starvation. Thousands of Libyan Jewish residents holding foreign citizenship were expelled to different destinations. The new deportation policy was known as “sfollamento,” or “removal.”

The expulsion decree hit the Roumanis particularly hard. Because various branches of the extended family were citizens of several different countries, the Roumanis were torn apart and deported to different locations.

“Some of my relatives held Algerian citizenship, so they were deported to the west, to Algiers,” Prof. Roumani explains. “Several dozen others held British citizenship—they had originally come from British-occupied Gibraltar—and they were sent to detention camps in Italy, and then later to Bergen-Belsen. Most of us, numbering more than two hundred, held either French citizenship or what was known as ‘Tunisian citizenship under French protection,’ so we were deported to the east, to Tunisia.”

Since communication was severely restricted, none of the relatives were able to maintain contact with those who went to other countries. It would not be until the end of the war— three years later—that they would finally find out what happened to one another.

A total of about 900 Libyan Jews with British citizenship were deported to Italy. But after the Germans occupied Italy in late 1943, the exiled Libyan Jews were deported again, some to the notorious Bergen-Belsen concentration camp, others to the Innsbruck-Reichenau slave labor camp. Most of them managed to survive, however, thanks to the fact that they were British citizens. Nazi officials thought they might be useful as bargaining chips in a prisoner exchange with the British.

Prof. Roumani was a young child at the time, but still vividly remembers some of what he and his family endured during the expulsion. “We were packed into the back of trucks, without any of our possessions, basically just the clothes on our backs,” he tells JNS.org. “The journey went on for several days—it was more than 1,200 miles to Tunisia. At night, some of us slept on the ground, underneath the trucks.”

After several grueling days in the Saharan desert, they arrived in the Tunisian town of La Marsa, where they were housed in a single rectangular one-story building, with each family crowded into a single room. “Food was insufficient and sanitary conditions were unbearable,” Roumani notes. “We arrived penniless and with no possessions except for a few clothes—we survived only because of the support we received from the local Jewish community.”

The building had no protection from the war raging in North Africa between the Allies and the Axis, and in one bombing raid, 13 of Roumani’s relatives, including his grandmother, aunts, and uncles, were among the approximately 200 Jews killed. Many others were severely wounded or permanently traumatized.

In the postwar period, some survivors of the Libyan slave labor camp at Giado received limited financial compensation from the German government—but only if they emigrated to Israel, and only if they arrived in Israel between 1949 and 1953. Much later, in 2004, some of the other Libyan deportees began receiving a small monthly sum from the Germans. But those Libyan Jewish deportees who did not move to Israel, and who passed away prior to 2004 received nothing, nor did their descendants.

“No amount of money can ever make up for the lives that were lost or shattered,” says Roumani. “But our suffering, although not the same as what others experienced, deserves to be recognized, like other Holocaust survivors who suffered at the hands of the Nazis and their collaborators.”

Dr. Rafael Medoff is the director of The David S. Wyman Institute for Holocaust Studies, in Washington, D.C., and author of 15 books about Jewish history and the Holocaust. The latest is “FDR and the Holocaust: A Breach of Faith.”