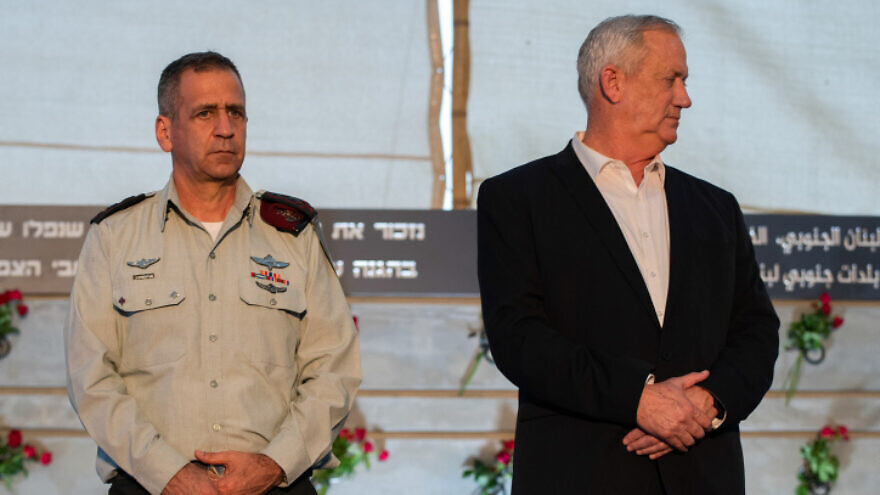 IDF Chief of Staff Lt. Gen. Aviv Kochavi and Israeli Minister of Defense Benny Gantz at a ceremony for a new monument in memory of fallen soldiers of the South Lebanon Army (SLA), in Metula, in northern Israel, on July 4, 2021. Photo by Basel Awidat/Flash90.
Republish this article
781 WORDS
Spread the word.
Help JNS grow!
Share now:

(August 3, 2021 / JNS) After two years of lacking an updated budget, the Israeli government finally approved a new defense budget (as part of the state budget) on Monday, although it still requires the approval of the Knesset.

According to an agreement struck last week between the Defense and Finance Ministries, the defense budget for 2022 will total 58 billion shekels (about $18 billion).

That sum is two to three billion shekels less than what was requested by the Defense Ministry, according to Brig. Gen. (Res.) Dr. Sasson Hadad, a former financial adviser to the IDF Chief of Staff and the ex-head of the Budget Division at the Defense Ministry.

Hadad stated that expenses created by “Operation Guardian of the Walls” in May against Hamas and Palestinian Islamic Jihad in Gaza, a Defense Ministry plans to revamp an injured IDF veteran rehabilitation program and a program that funds most of the university expenses of former IDF combat soldiers were all factored into the higher budget request.

Hadad, who is currently head of the program for Economics and Security at the Tel Aviv-based Institute for National Security Studies, added that the budget is for 2022 alone, while the IDF is seeking financial assurances for a multi-year force design program called “Momentum,” which began in 2020 and is due to last until 2024.

According to the IDF, Momentum is a response to the increasing challenge that Israel’s adversaries pose to its defense edge. It “lays out an approach for decisive battlefield victory against capable adversaries, and provides a theoretical and practical outline for Israel to go on the attack,” the military said last year.

Hadad said that since the years 2023 and 2024 remain financially unaccounted for, the struggle over future defense budgets will begin anew.

He assessed that at the current stage, all of the IDF’s force design programs will proceed, though some of them will be smaller in scale than originally planned.

Regarding the funding available for use of current military power, he said he does not expect any reduction, due to the fact that the ability to activate the IDF forms “an immediate test for the current defense minister and prime minister,” while Finance Minister Avigdor Lieberman is himself “a hawk from this perspective, hence I estimate that there will be no harm regarding the ability to activate the military.”

Hadad noted that Defense Minister Benny Gantz, Prime Minister Naftali Bennett and Lieberman all served as defense ministers in recent years. “This is the only ministry [Defense] that is the subject of agreement between the Ministries [Defense and Finance], and hence I do not expect a substantial change to the plans or to the budget,” he said.

Throughout 2020 and 2021, Israel’s defense budget, like the entire state budget, was a continuation of the budget passed in 2021, though the defense establishment received sporadic cash transfers as well.

Last week, Gantz said that the new budget will enable Israel to ensure its defense superiority in the face of growing threats, and “allow the IDF to implement its Momentum multi-year program.”

Bennett added that the budget will mean a green light to IDF plans to purchase new equipment and design its modern force.

The budget will also allow the Defense Ministry and Home Front Command to complete a program to reinforce civilian homes in 21 northern Israeli villages that are close to the border with Lebanon against rocket and missile fire.

Part of Momentum’s logic is to prepare the IDF against what the Chief of General Staff, Lt. Gen. Aviv Kochavi, calls “rocket-based terror armies,” meaning that the IDF no longer views Hezbollah and Hamas as just insurgent-guerilla terror groups, but as an “advanced networked adversary that has cracked the secret of Israel’s military power and presents it with an operational challenge that serves the enemy strategy of posing a significant threat to Israel.”

“These are organized, well-trained armies, well-equipped for their missions, with straightforward operational ideas and tactics that serve those ideas, all of which support a clear and dangerous strategy and ideology,” the IDF stated in 2020 on its website.

“The purpose of IDF force design must be negating the enemy’s combat ability,” it added, especially its “ability to attack our home front.”

Based on the understanding that “airpower itself cannot achieve this,” Momentum aims to guide the IDF towards the ability of launching a ground maneuver that enables Israeli military units to expel adversaries from bunkers and tunnels, expose their location and destroy them rapidly, and maneuver into their vulnerable positions.