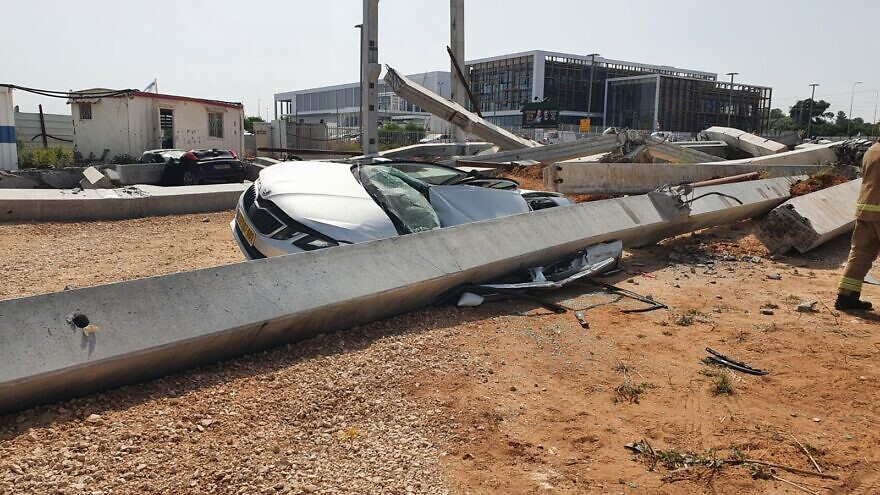 (April 22, 2020 / JNS) Emergency services in Rishon Letzion scrambled on Wednesday morning following reports that multiple people had been trapped beneath the wreckage of a collapsed construction crane, however, paramedics and EMTs from Magen David Adom and United Hatzalah later reported that there had apparently been no casualties, and all the construction workers had been accounted for.

According to MDA Ayalon region manager Efi Bar, “As soon as we received the report of the incident, we sent a large force to the area because there was fear of many casualties. We arrived quickly and after preliminary scans of the area, no injuries were observed. Our paramedics and medics are there and prepared to provide medical care if need be.”

“When I arrived at the scene, I saw a number of cement pillars had fallen. According to workers at the construction site, the pillars collapsed while they were being worked upon. After in-depth searches covering the entire area, workers together with first responders revealed that miraculously no one had suffered any injuries. The workers at the construction site said that there were no missing workers at the site. There was significant damage to a number of cars that had parked in the vicinity,” said a United Hatzalah volunteer EMT.

According to Israeli nonprofit Kav LaOved–Worker’s Hotline, there have been 14 construction-related fatalities and 87 injuries, including 16 critical injuries, in the country so far this year.

In 2019, there were 47 construction-related fatalities and 197 injured, including 24 critically. The number of workers killed in Israeli construction sites is 2.5 times larger than in the European Union, per 100,000 workers, as “many of the safety standards in this sector are outdated, and new ones are hardly ever put into effect,” said Kav LaOved.

United Hatzalah international spokesperson Raphael Poch similarly told JNS, “Construction accidents unfortunately happen all the time. There was proposed legislation that happened a couple times in Knesset that tried to protect workers, but unfortunately, we see that again and again, on a regular basis, construction accidents are happening in Israel, claiming lives and injuring people.”

According to Poch, even during the coronavirus outbreak when there is less construction, United Hatzalah is called to the scene of a construction site accident on a daily basis.

“There are still far too many accidents … and these accidents are most of the time preventable,” he said. “There needs to be more care and consideration and quality control at construction sites across the country with more safety measures put in place to protect the lives of construction workers and bystanders.”