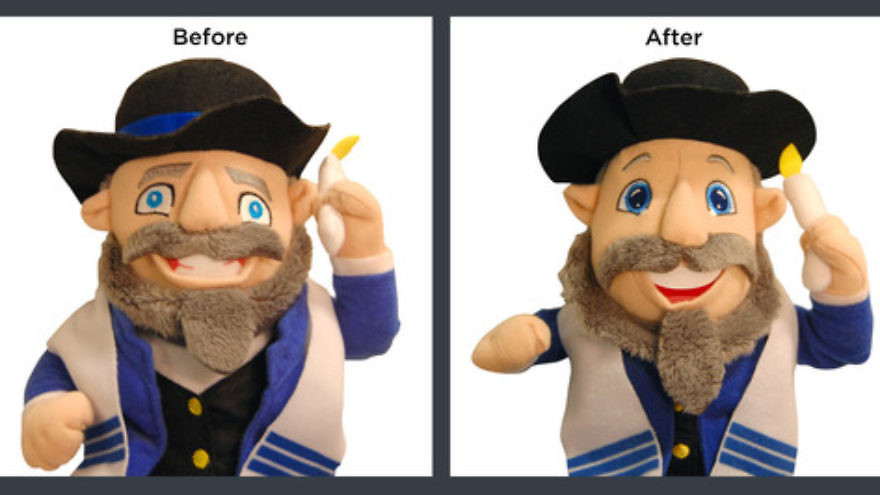 The Mensch on a Bench is so much happier now than he was a year ago. Look carefully and you will notice that, whereas the previous Mensch had a decidedly worried look, this latest version of the popular Hanukkah toy is flashing an exuberant grin.

Is the erstwhile Mensch smiling because he expects to be in some 100,000 homes by year’s end? In truth, the change in visage was suggested last year by the “sharks” on ABC’s “Shark Tank” program, where Mensch on a Bench founder Neal Hoffman pitched for—and secured—investors in his company. The requested change in facial expression was one that Hoffman was happy to make.

“We were going so fast—in less than a year we went from concept to product on the shelf—that I didn’t match the Mensch’s face to the one in the book,” Hoffman told JNS.org, referring to how the plush doll is sold for around $30 along with a book that tells the story of Hanukkah while featuring “Moshe the Mensch” guarding the miraculous lights of the menorah in the ancient Temple.

But the 38-year-old Cincinnati man, a toy pro after his six years with Hasbro, is not one to rest on his laurels—or his bench. Having sold out last year’s crop of 60,000 units—the previous year, his initial run of 1,000 Mensches was snapped up within 10 days—he has already sold 50,000 this fall, well ahead of last year’s pace. And at outlets such as Target and Bed, Bath & Beyond, the Mensch and his book now have company—Hoffman has produced a new plush menorah (featuring the kids from his son’s Hebrew school singing all three prayers over the Hanukkah candles), a plush dreidel, an activity book, and the perennial Hanukkah favorite, chocolate.

The Mensch first popped into Hoffman’s brain when his 4-year-old, Jacob, was begging his dad for an Elf on the Shelf—the legendary Christmas toy.

“Why shouldn’t Jewish kids have something they can relate to?” Hoffman reasoned, adding that interfaith families now employ the Mensch to introduce Jewish traditions and values into their homes.

“To be a mensch is first and foremost to be an ethical person, someone who cares about others and is doing the right thing,” Hoffman said. “It’s a very Jewish message.”

That pleases ones of his biggest fans: Ina Hoffman, his mother.

“Creative? Yes, he always was, and even when he was young he was fascinated by how businesses work,” said Ina, speaking from her Salem, Mass., home. “He comes up with amazing ideas and, unlike most people, he acts on them.”

Of course, she is proud of her son’s success, but mostly, Ina is proud of something less fleeting.

“It takes a mensch to promote a mensch,” she said. “He brought the idea to so many who didn’t have the awareness of what a mensch is.”

Evidently, it’s not a message limited to kids, with the likes of Whoopie Goldberg (the Mensch was featured on her show, “The View”) and former U.S. senator Joe Lieberman caught on camera with the Mensch.

This Hanukkah season, Hoffman has also brought the Mensch into the 21st century as a featured character on Office Depot and OfficeMax’s “Elf Yourself” website. There, through the magic of the computer, visitors can (virtually) dance with the Mensch. (Visit www.elfyourself.com and, after placing your picture in the elf, select “Let’s Dance” and then “Oh Hanukkah”—it’s the Maccabeats’ rendition you will hear. Note: the program is free to sample, but a small charge is made for subsequent visits.)

“I really think the Mensch came at the right time at the right place,” said Neal Hoffman. “With the popularity of Elf on a Shelf, the Jewish community was feeling left out. The Mensch is a Jewish guy, a tool to bring more Hanukkah into our homes.” (The Mensch is under orders to watch over the candles.)

In addition, he said, “the Mensch teaches Jewish concepts and values,” including designating one night of the eight during Hanukkah to buy gifts for those less fortunate.

“The goal is to make family Hanukkah celebrations more memorable,” the entrepreneur said, adding, “The Mensch is an inside joke and Jews love inside jokes.”

With his smiley new face, the Mensch is winning over new fans. Among them is Sarah Segal, who was intimidated by the old Mensch’s facial expression but has now warmed up to the toy, said her father and Hoffman’s friend, Allan Segal of North Andover, Mass.

“She was only 3 at the time and didn’t like it [at first], but I knew the Mensch was a home-run,” Allan Segal said. “Neal is a very creative guy.”

Stay tuned for an ever-expanding Mensch universe. Hoffman is currently toying with a female version of the Mensch—hello, Maidel on a Bench?—and “Mensch celebrations” of other Jewish holidays. A Mensch television cartoon show is also in the works.

“He’s always coming out with cool new ideas and products,” Segal said. “You don’t see the Elf on a Shelf doing that. After Christmas the Elf is over. But the Mensch? He just keeps going.”