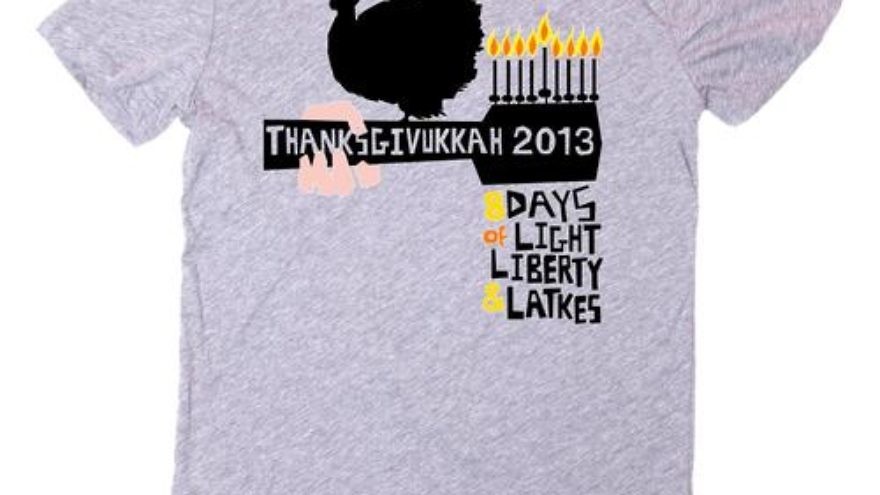 Nov. 28 marks Thanksgiving Day, as well as the first day of Hanukkah 2013. It would be a natural reaction for an American Jew, when noticing that overlap during a casual reading of the calendar, to smile or even laugh. But Dana Gitell took things much further.

A marketing professional living in Norwood, Mass., Gitell coined and trademarked the word “Thanksgivukkah,” launched a website as well as Facebook and Twitter pages for the joint holiday, and partnered with Judaica retailer ModernTribe.com on a line of t-shirts and greeting cards to mark the occasion—one that, according to one analysis of the Jewish and Gregorian calendars, won’t occur again for more than 75,000 years.

Gitell, who had known “Thanksgivukkah” was coming for five years, said the more she thought about it, the more she came to appreciate the significance behind the overlap of two holidays which “both celebrate religious freedom” and have “similar themes.”

“You can celebrate Judaism, you can celebrate America, and you celebrate the Jewish-American experience on the same day, because how would this be possible if we didn’t have a country as free and as welcoming as America?” Gitell told JNS.org.

Exactly how rare is Thanksgivukkah? Gitell did her due diligence through online research and taking a stab at the math herself, but said she ultimately leaves such matters “to the scientists.” Enter Jonathan Mizrahi, who has a Ph.D. in Physics from the University of Maryland and currently works for Sandia National Laboratories in Albuquerque, NM. Mizrahi used the math software program Mathematica to chart the futures of the Jewish and Gregorian calendars, and the output “produced no results other than this year.”

“I thought I made an error in the program, and I checked what I’d done, and everything seemed okay, and I pushed the year out further and further and further… and it still was telling me that it wasn’t ever going to happen,” Mizrahi told JNS.org.

According to an analysis posted online by Mizrahi, the Jewish calendar “is very slowly getting out of sync with the solar calendar, at a rate of four days per 1,000 years.”

“This means that while presently Hanukkah can be as early as 11/28, over the years the calendar will drift forward, such that the earliest Hanukkah can be is 11/29,” Mizrahi wrote. “The last time Hanukkah falls on 11/28 is 2146 (which happens to be a Monday). Therefore, 2013 is the only time Hanukkah will ever overlap with Thanksgiving.”

“Of course, if the Jewish calendar is never modified in any way, then it will slowly move forward through the Gregorian calendar, until it loops all the way back to where it is now. So, Hanukkah will again fall on Thursday, 11/28… in the year 79811,” he added.

Gitell got enthusiastic feedback when she started posting juxtapositions and mashups of different cultural aspects from Thanksgiving and Hanukkah online.

“So many people that I talked to, many who aren’t Jewish, think it’s exciting and funny,” she said.

After creating the Thanksgivukkah Facebook page with her sister Deborah, Gitell worked with graphic illustrator Kim DeMarco to design t-shirts and greeting cards, and approached ModernTribe.com about being the retailer. She said she got an email response from ModernTribe.com within five minutes of sending the inquiry.

“After talking with Dana, and seeing the modern designs and illustrations of Kim DeMarco, I knew that a collaboration to create Thanksgivukkah items was a perfect match for our mission to create ways for modern Jews to express their faith and keep our traditions alive, meaningful and fun,” Jennie Rivlin Roberts, president of ModernTribe.com, said in a statement.

The ModernTribe.com Thanksgivukkah merchandise employs the slogan “Light, Liberty, & Latkes.” Ten percent of its proceeds will benefit the nonprofit MAZON: A Jewish Response to Hunger.

“I felt like [Thanksgivukkah is] almost like a Woodstock-like event, we can tell our kids, ‘I was there, I lived through Thanksgivukkah. I remember that day, it will never happen again.’ So that gave me the idea for something akin to a concert t-shirt, expressing that you were there, you lived through it, as a memento,” Gitell told JNS.org.

Gitell said her childhood in Squirrel Hill, Pa., a neighborhood of Pittsburgh with a significant Jewish population, colored her passion for the Thanksgivukkah project.

“[Squirrel Hill] was a place where most kids were Jewish, and people who weren’t Jewish, they felt left out,” she said. “Non-Jews wanted to have their own bar mitzvah in middle school. That’s the kind of experience that probably could only happen in America.”

No matter what metric one uses, Thanksgivukkah has garnered a significant following—Mizrahi’s mathematical analysis garnered about 100,000 page views online, to his “utter amazement.”

“When I first did this, I thought it was interesting, but I did not expect anywhere near the response I got,” Mizrahi said.