(October 28, 2021 / JNS) The European Commission announced in early October that Jewish life will be fostered in a Europe that was home to 9.5 million Jews before the Second World War and whose remaining 1.5 million are abandoning the Old Continent.

“We want to see Jewish life thriving again in the heart of our communities,” said E.C. President Ursula von der Leyen. “This is how it should be.”

In recent years, Portugal has become home to thousands of Jews. The choice of this country may provide the inspiration and serve as a model for what the European Union does, in fact, need.

Once again, Portugal is on the Jewish map. Small Jewish communities, mainly consisting of recently arrived Sephardim, are growing and strengthening throughout the country, even in less populated areas than the capital.

Cascais, a town in the district and metropolitan area of Lisbon, is home to the largest Chabad center in Europe, and two families in the organization work together to aid the whole country. Their enthusiasm is unmistakable. They believe that Portuguese Judaism will be a serious matter in the future. The most recent Chabad couple is Sephardic, not Ashkenazi, which is unusual in that New York-based organization.

The best example of the revitalization of Jewish life in Portugal is the Jewish Community of Oporto (CIP/CJP). According to Gabriela Cantergi, an official at CIP/CJP, “Our Community does not exist to please everyone, but rather to honor the Jewish community that was expelled from this city in the late 15th century, and to be a strong religious, cultural and social organization in Portugal and abroad.”

Led by Israeli rabbis, the main synagogue of the city—the Kadoorie Mekor Haim Synagogue, although there are others—has seven hundred official members originating from more than 30 countries. These congregants are engaged in the arts, sciences, medicine, music, law, banking and sports. The overwhelming majority, however, are business people who have invested billions of euros in Portugal in recent years. 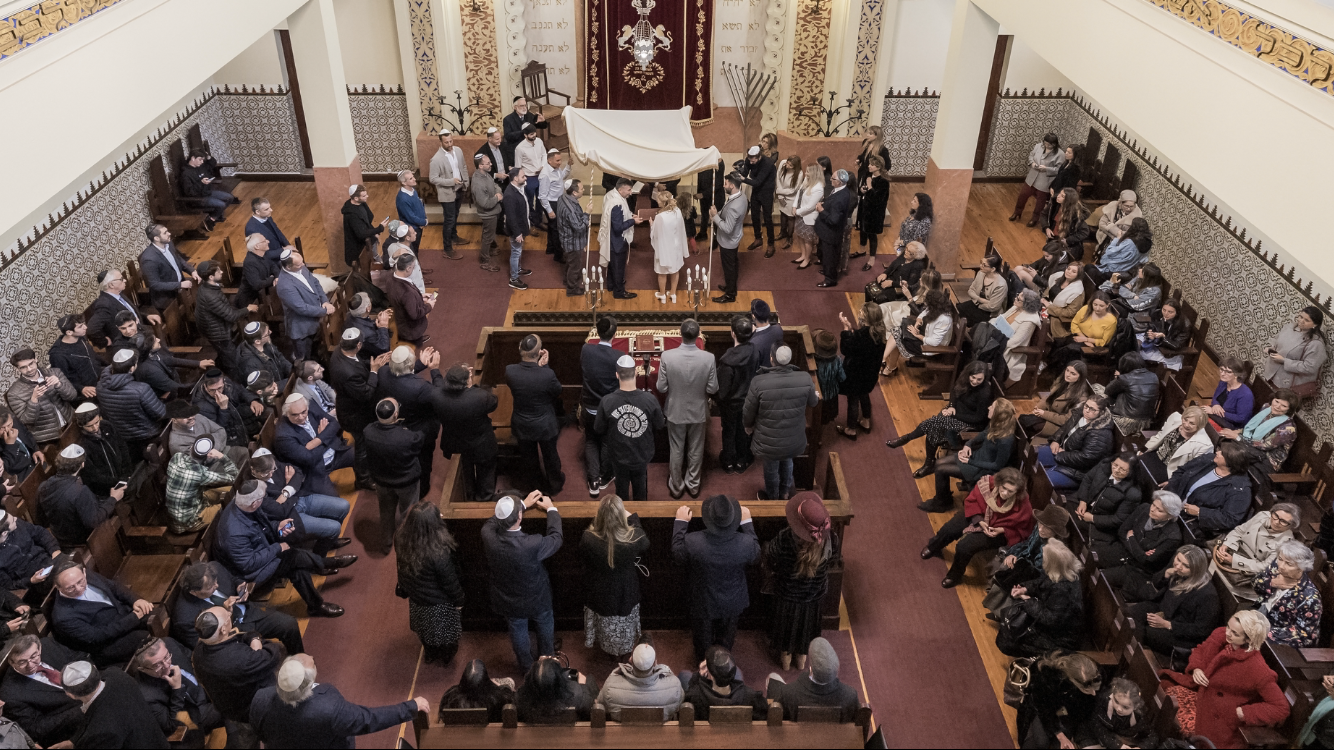 The community also strives to welcome foreign Jewish students enrolled at the universities of Oporto, including them in community activities and creating meeting centers for them.

“Our aim is to foster friendship and possibly future marriages between students who come on their own to this country, mainly from France,” said Noemie Amar, of CIP/CJP’s department of religion.

Portuguese President  Marcelo Rebelo de Sousa paid a visit to the Oporto community in 2019 and was visibly impressed by the Jewish ambiance of “Portugality” he found there. This was also the case recently with a much-traveled Jewish author who commented about the last Yom Kippur ceremony that she had never heard search passionate prayers and songs in a synagogue. That is the result of six years of non-stop minyanim on Shabbat and holidays.

In 2012, the synagogue building looked to be on the verge of collapse. It was extensively refurbished the following year, and important religious ceremonies were held there. In 2014, the Community inaugurated a kosher hotel and Jewish tourists poured into the city. After 2015, the law granting Portuguese nationality to Sephardic Jews increased both the number of community members and Jewish cultural events.

The Jewish community of Oporto has built and developed new Jewish centers, prayer rooms, kosher restaurants, a Jewish museum, a Holocaust museum and a library. It also organizes conferences and concerts and has established a newspaper. 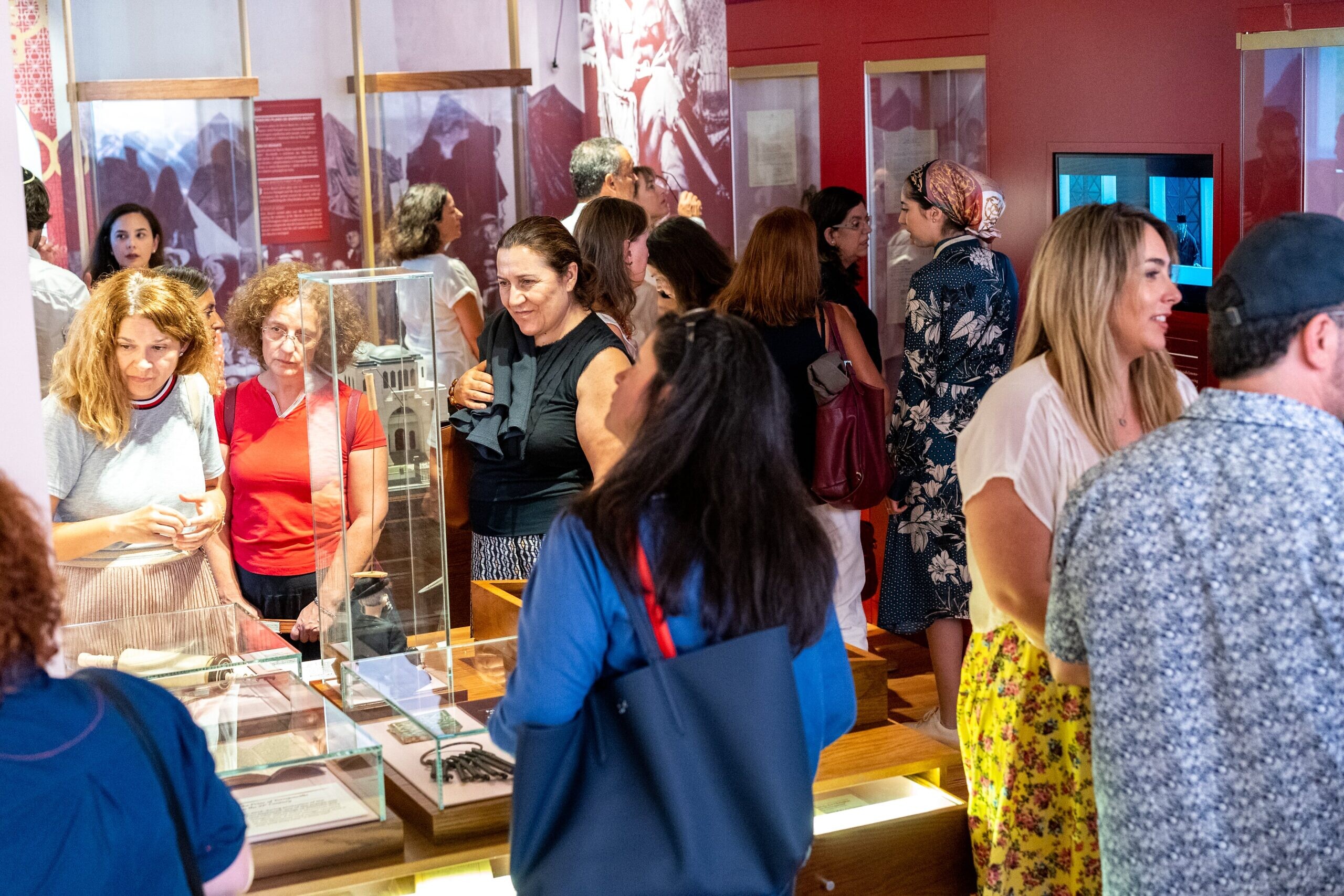 The Jewish education center in Porto. Credit: Courtesy of CIP/CJP.

It will soon be opening an art gallery with the millennial story of the Jews in Oporto. Flor Mizrahi, a professional painter and longstanding member of CIP/CJP, is the project coordinator and eager to see it completed

“I won’t live forever,” she said. “And, as a Sephardic Jew, I wish to leave my personal mark. In early 2022, the group of artists coordinated by me will have the gallery museum ready.”

The Jewish Museum of Oporto, created by CIP/CJP in partnership with B’nai B’rith International, recounts the millennial history of the city’s Jewish community, its expulsion, the return of Moroccan, Gibraltarian and Venetian Sephardic Jews in the 19th century, the failed attempt to convert the Bnei Anousim to Judaism in the 1920s and 1930s and German, Russian and Polish Ashkenazi Jews in the 20th century, as well as the “major Sephardic influx of the 21st century,” basically motivated—said Rose Mousovich of CIP/CJP’s department of culture—“by the nationality that Portugal grants to Jews of Portuguese origin.”

In 2014, the Jewish Community of Oporto contacted the Justice Ministry to request that a foreign-based commission issue certificates of Sephardic heritage for those seeking Portuguese nationality. The ministry, however, put its faith in the communities of Oporto and Lisbon.

The former’s archives, located in a set of rooms measuring about 150 square meters (492 feet), contain thousands of documents on Sephardic Jews, mainly those from North Africa and the former Ottoman Empire. These people requested certificates of Sephardic heritage from the Oporto Rabbinate in order to request Portuguese nationality.

“A little of Portugal’s promising future passes through this office. Jewish Sephardic immigration is highly skilled,” said Vivian Groisman, who together with Mousovich, runs the CIP/CJP Sephardic archive.

The organization helps hospitals, children, the elderly and the infirm in Portugal. It made a donation to the Torre do Tombo National Archive to treat and digitize Inquisition processes in danger of rotting. It signed a protocol of cooperation with Sociedade Histórica da Independência de Portugal (the Historical Society of the Independence of Portugal), considering the friendship between the first king of Portugal, D. Afonso Henriques, and Yaish ben Yahia, Great Rabbi of the Realm, who died in battle at the service of the king.

Despite the Jewish community’s many valuable contributions to Portuguese culture, inter-religious cooperation and the economy, this Jewish renaissance has opened the doors to anti-Semitism.

“We are sorry to see that the millenary and material image of the Jews is spreading, not linked to good feelings and worthy causes, but to trickery and business, in addition describing them as plutocrats with their own state in Israel,” explains Dara Jeffries, a CIP/CJP leader. “There was no anti-Semitism because the Jewish presence was small.”

The Holocaust Museum of Oporto was created in partnership with the Holocaust museums of Washington, Moscow and Hong Kong. It is run by members of the Jewish Community of Oporto who lost family members in the Shoah.

“Since its inauguration in May 2021, this musicological space is the one in Portugal that has had the most visitors. As there is no admission charge, the museum is mainly visited by young people and has also welcomed important Portuguese and foreign politicians, as well as the ambassadors of the United States, Russia, the United Kingdom, France, Belgium and others,” says Holocaust Museum board member Debora Elijah, whose maternal and paternal grandparents died in Auschwitz.

The Jewish Community of Oporto has important national and international partners, including the government project Never Forget, the Anti-Defamation League and the Combat Anti-Semitism Movement. It has a strategy to fight anti-Semitism in areas ranging from charity and religion to culture, while also promoting courses for secondary-school teachers. This strategy has already “drawn the attention of relevant European politicians, such as Swedish Prime Minister Stefan Löfven, who met with the board of the community to prepare the Malmö Forum on Combating Anti-Semitism,” CIP/CJP board member Isabel Lopes disclosed.

Combating anti-Semitism was one impetus that led to the signing of protocols with the country’s Muslims and Catholics. CIP/CJP is on excellent terms with the Muslim community of Oporto and is one of the founding organizations of the world project “Mukhayriq,” aimed at relaunching relations between Jews and Muslims worldwide. Mukhayriq was a rabbi who gave his life defending the Prophet Muhammad during an epic battle in the seventh century.

Another important project was the protocol signed with Oporto Diocese. It covers charitable and educational projects involving the Museum of the Episcopal Palace and the Jewish Museum of Oporto, and has produced four films on the history of the Jews in the city. “1618,” about the Inquisition, garnered the most prizes that a Portuguese film ever won in international festivals.

Meetings between the Jewish and Catholic communities of Oporto also gave rise to another film, “The Nun’s Kaddish,” and was praised by Pope Francis, who applauded the friendship and cooperation between the two religious communities as a good example for the world.

Marilyn Flitterman, a  CIP/CJP institutional representative, recalled that when she arrived in Portugal from Brooklyn 50 years ago, “only a handful of Ashkenazi families tried to provide some sort of Jewish presence in the city.”

The Jewish community was still suffering the aftereffects of the 1496 expulsion and very few of its members, most hailing from Central and Eastern Europe, were proud of their roots.

Eta Rabinovich was married in the Kadoorie synagogue in 1948 and is always moved when she visits the Jewish Museum of Oporto and sees photographs of her family.

“As I recall, we were very few back then, but we all did what we could to observe Jewish law,” she said.

“Before the war, my grandparents left the Polish community with its 3 million people, to join about 30 Jews in the city of Oporto. They liked many things in life, but what they liked most was being Jewish.”

For decades, my mother, Rebeca Assor, accompanied my father, Abraham Assor, then rabbi of the Israeli community of Lisbon, on his frequent visits to the Jewish Community of Oporto.  What she says corresponds to the historic core of the congregation: “It always respected Judaism, signaling something positive for a future that was more or less in the distance.”

The present Jewish Community of Oporto supports Keren Hayesod projects for the development of Israel and donates food for Shabbat meals in communities of a number of countries. The Hebrew words that the community fosters most are achdut (“union”), simcha (“joy”) and kadima (“forward”), but the teachings of Jewish history are just as emphasized.

The official website explains it better: “The history of the Jews in Europe teaches us that where there are many Jews today there may be none tomorrow. Accordingly, the laws of the community have established that it if should end one day, all its properties and assets revert to the Jewish Agency for Israel.”

Miriam Assor, a writer and journalist, is a member of the Jewish community of Lisbon.