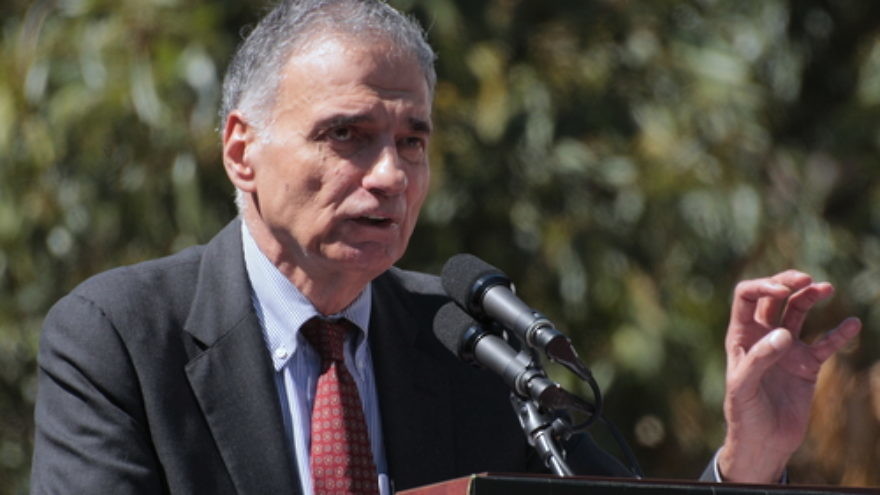 Ralph Nader, the famous crusader against fraud and corruption, believes he has uncovered a horrific new injustice—and the perpetrators are “the Jews.”

“You never avoid using the word anti-Semitism when Arabs and Arab-Americans are discriminated against, are arrested without charges, are exposed to all kinds of swears and bars against employment and all kinds of discrimination that goes on, and that is anti-Semitism. The Semitic race is Arabs and Jews and the Jews do not own the phrase anti-Semitism,” Nader declared at the recent annual convention of the American-Arab Anti-Discrimination Committee (ADC), where he was a featured speaker.

The five-time unconventional U.S. presidential candidate added that “anti-Semitism against Arab-Americans is a serious problem, and of course it’s much more serious around the world.”

Nader, the son of Lebanese immigrants, rose to fame in the mid-1960s with his campaign to expose safety problems in automobiles. His efforts led to stricter regulation of the auto industry and the adoption of many new safety mechanisms. But in leaping into the debate over anti-Semitism, Nader has ventured far from his areas of expertise.

Is the Semitic race “Arabs and Jews,” as Nader asserted? Actually, it’s not. “Semitic” refers to a group of Middle Eastern languages. There’s no such thing as a “Semitic race.”

In his critically acclaimed 1986 book, “Semites and Anti-Semites,” Bernard Lewis (professor emeritus of Near Eastern Studies at Princeton University) wrote, “‘Semitic’ is a linguistic and cultural classification… It has nothing whatever to do with race in the anthropological sense that is now common usage.”

So where did the term “anti-Semitism” come from? Why not just say “anti-Jewish” instead?

Until the late 1800s, hatred of Jews in Europe was rooted in religious bigotry—resentment of Jews for rejecting Christianity, and allegations about various Jewish religious practices. But in the latter part of the 19th century, a number of German nationalists began shifting their attacks on Jews to more secular accusations: that Jews are not loyal to the countries in which they live, that Jews cheat non-Jews, or that Jews are a harmful influence on modern culture. Unlike the medieval “solution” that Jews should convert to Christianity, this modern Jew-hatred promoted legal restrictions and other types of governmental action against Jews.

Seeking to distinguish this new criticism of Jews from the medieval religious variety, the German anti-Jewish agitator Wilhelm Marr in 1879 coined the term “antisemitism” (“antisemitismus” in German). His target was still Jews; he simply believed the new phrase would make his brand of hatred sound more legitimate and even scientific. The organization he founded to further these aims was called the Antisemiten-Liga, or League of Antisemites.

As the term gained currency in English, it was commonly spelled “anti-Semitism,” with the hyphen and capital “S,” thus implying that it refers to hatred of “Semites,” although most of the public has always understood that it refers to hatred of Jews. In recent years, many scholars have adopted the spellings “antisemite” and “antisemitism,” without the hyphen or capitalization, in order to make it clear that they refer to beliefs or actions against Jews, not against “Semites” or “Semitism”—neither of which exists.

Ralph Nader’s real aim, however, is not linguistic accuracy. As he explained to the ADC convention, he wants to use language as a tool to advance the Arab campaign against Israel.

According to this formula, Arabs would gain victim status just like Jews.

Nader seems to be particularly sensitive to the fact that some hatred of Israel is perceived as anti-Semitic—and he wants to prevent that perception from taking hold.

“[Supporters of Israel] know how to accuse people of anti-Semitism if any issue on Israel is criticized, even though the worst anti-Semitism in the world today is against Arabs and Arab-Americans and they know how to use the language,” he complained. “I suspect AIPAC spends more money on hotels for their national meeting in five hours than ADC’s entire budget, so it’s important to ask the question: ‘What does it take in terms of human hours and resources to get things turned around?’”

“Getting things turned around”—that is, turning Americans against Israel—is what Nader and his cohorts seek. Whether claiming that Israelis are “the real Nazis,” as Arab propagandists often do, or that Arabs are “the real victims of anti-Semitism,” as Nader is now recommending, it all boils down to just another way to try to get people to hate Israel—and if it takes a little linguistic trickery to facilitate that goal, so be it.

Dr. Rafael Medoff is the founding director of The David S. Wyman Institute for Holocaust Studies and co-editor of the “Online Encyclopedia of America’s Response to the Holocaust.”