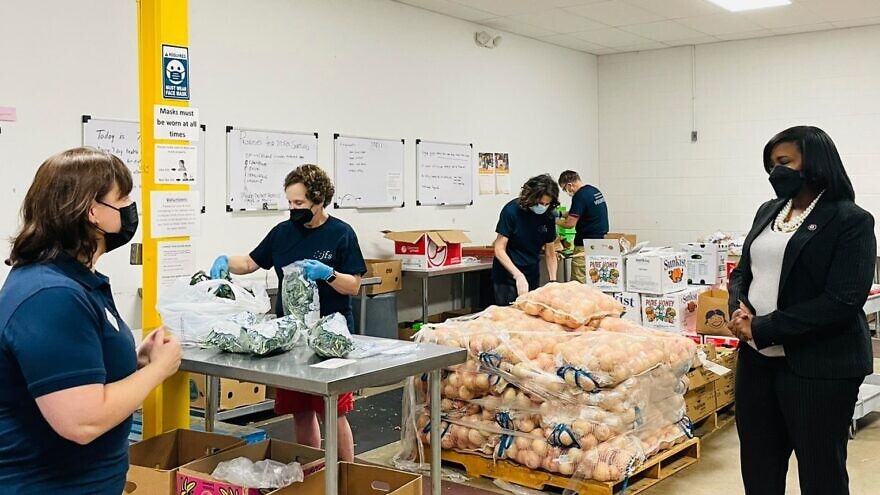 (July 28, 2022 / JNS) Jewish leaders in St. Louis offered Rep. Cori Bush (D-Mo.) on a tour of a local Jewish pantry and a Holocaust museum this week, despite the recent controversy over her ties to anti-Israel activist Neveen Ayesh.

“We were grateful that the congresswoman and her team took time to join us, as the Jewish food pantry and Holocaust museum hosted us to tour these valuable institutions,” executive director of the St. Louis Jewish Community Relations Council Rori Picker Neiss told Jewish Insider. “Our discussions focused on how these Jewish institutions benefit the St. Louis community.”

She said Bush and local Jewish leaders did not discuss anti-Semitism or the congresswoman’s views of Israel during the tour.

In a now-deleted July 25 tweet, Neiss said it was “an honor to host” the representative and “show her the incredible services our community provides to the entire St. Louis region,” reported Jewish Insider.

She shared images of Bush visiting the pantry in another tweet on July 26.

“Yesterday, @jcrcstl coordinated a tour for @RepCori of the Jewish Food Pantry. Today, I got a call from her office that someone whose home and car flooded needed food for their baby. Called @JFSSTL who immediately coordinated to have someone deliver to them. Help in action,” wrote Packer Neiss on July 26.

Over the last few weeks, Bush has been criticized by anti-Semitism watchdog groups and her primary opponent Democratic State Sen. Steven Roberts for receiving fundraising help from Ayesh, who serves as the government relations coordinator for the Missouri branch of American Muslims for Palestine.

Ayesh has a history of anti-Jewish and anti-Israel social-media posts, including ones where she called Israel “Satanic” and said she wants to set Israel “on fire with my own hands and watch it burn to ashes along with every Israeli in it.”

These posts, along with several others, were documented by the watchdog group Canary Mission.

Ayesh took responsibility for her tweets in a July 13 thread on Twitter, writing: “I was young, dumb and said horrible things that I never acted on, that I never would act on because I am not that person. My words came from a place of both pain and anger. I grew up under occupation and spent the rest of my life watching it.”

The anti-Semitism watchdog groups, however, expressed concern that she still harbored her old beliefs. As Canary Mission tweeted in response: “You still say ‘horrible things.’ Your non-apology doesn’t work. No one buys it.”