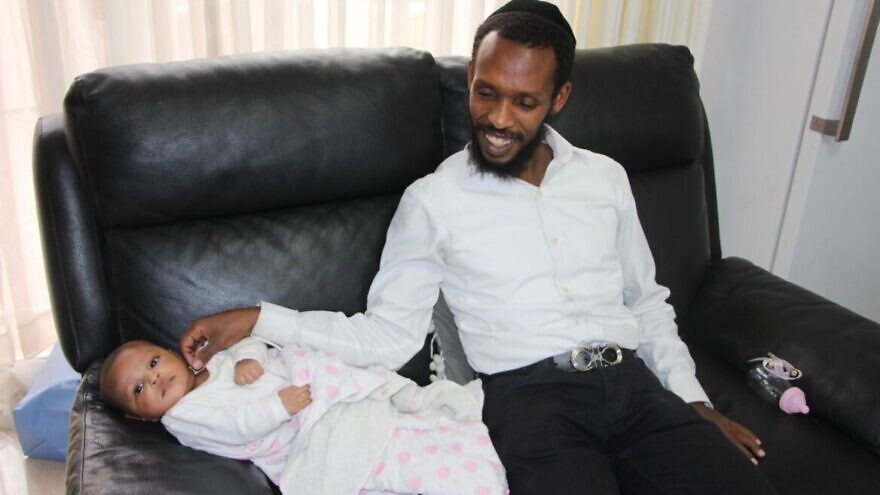 (December 27, 2021 / Israel21c) Avi Solomon is sitting on his couch at his home in Beit Shemesh playing with his two-month-old daughter, Malka. Nike, his service dog, is by his side. His six other children are at school, and it’s a rare moment of quiet for Solomon, a marathon runner, because he’s resting on doctor’s orders.

Solomon, who is blind, took a tumble just a few weeks before we spoke, at the thirty-first kilometer of the London Marathon in October, injuring his leg. It wouldn’t stop him for long, though. The 40k Abu Dhabi marathon was coming up in November, and Solomon is not the type of man to let anything get in his way.

Aside from running marathons, Solomon also works various jobs to support his family. He founded a nonprofit called Moreshet Avot to bring Ethiopian youth and adults back into the fold of religious Judaism, and leads inclusivity activities for groups including Afikim, a nonprofit organization that helps children and families at risk.

It’s an around the clock existence.

“You’re a lucky to catch me here,” admits Solomon, 38, who fields numerous phone calls during our interview, on topics ranging from running shoes to how to set up his early morning training with his coach, Daniel Ishta. 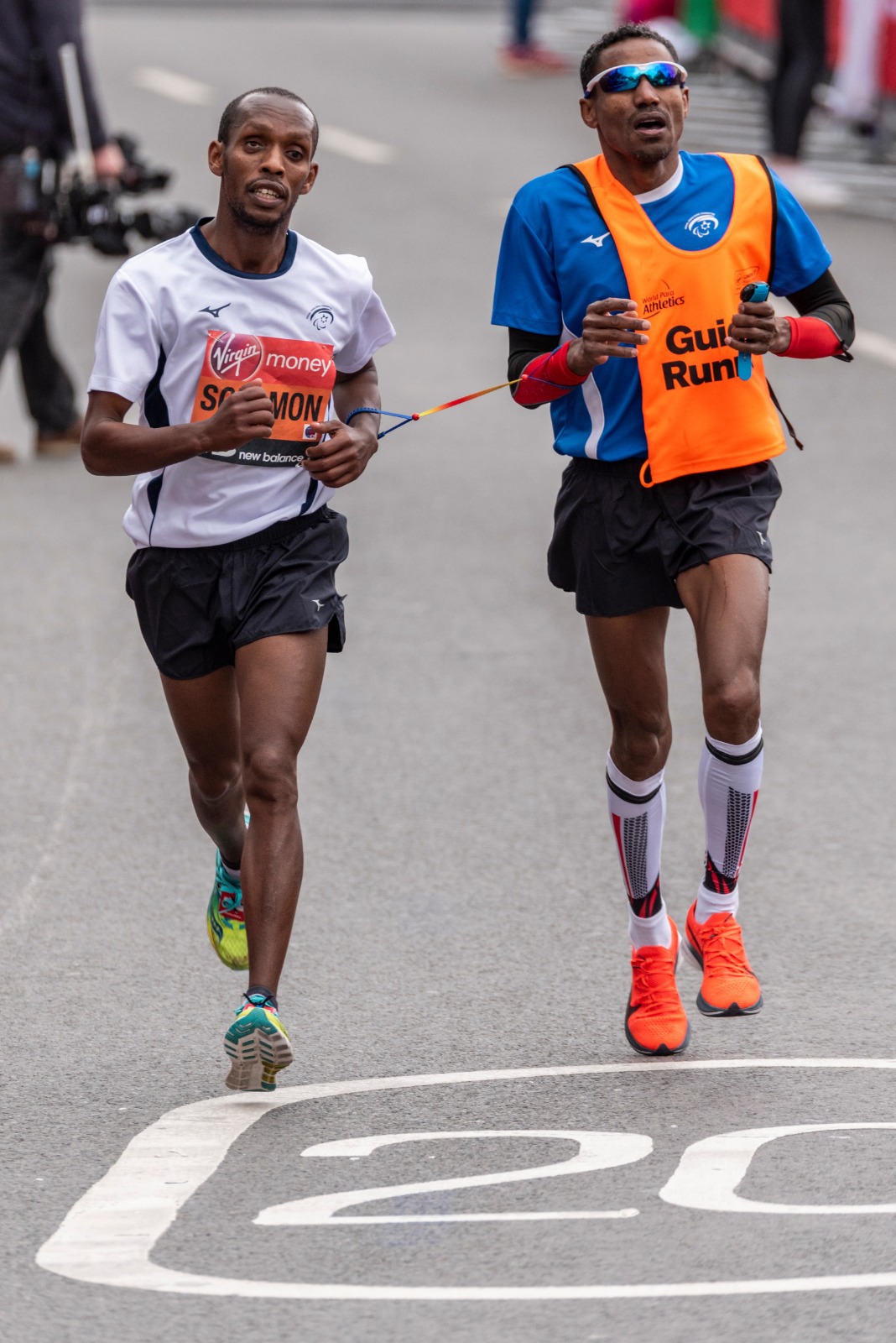 Solomon has faced adversity all his life.

Born in Ethiopia, where six of his siblings died, Solomon arrived in Israel in 1991 at the age of six with his parents and four other siblings on an airlift operation through Italy. His eyesight was already failing, and surgery had done nothing to rectify the situation.

In Israel he was diagnosed with glaucoma, and at the age of just 14, he lost his sight completely after an operation.

Three years later, his mother died. She was the bedrock of the family. She had picked up Hebrew quickly and worked hard to help her family adapt to their new circumstances, at the same time as giving birth to three more children in Israel.

“My mother played a very central role for all of us and losing her was very difficult,” acknowledges Solomon. “We were in a big crisis because we were already dealing with the loss of six siblings. I had to run between my boarding school and my house to help with my younger siblings who were born in Israel. It was not easy.”

Instead of giving in, Solomon found his way to running marathons, often raising money for the Israel Guide Dog Center.

Sports have been an integral part of his life since he was a child chasing wild animals away from his family’s sheep herd. He excelled at soccer while he could still see. After losing his sight, he turned to running.

“I was looking for a sport that would test my own personal abilities,” he says.

“In an individual sport you know that losing or winning depends only on you. Running is the best sport because you don’t stay in one place. You are always moving, meeting new people, in communication with your surroundings. If you want to run quietly you run quietly; if you want to run in a group you run in a group. Running does not demand a lot from you. You put on your running shoes and a shirt, and yallah, you are on your way.”

As a blind runner, the logistics are obviously more complex. Over the years, he built a supportive team, including running guides Ariel Goldsmith and Lior Berhano, with whom he completed the 2019 London Marathon in three hours and seven minutes.

The team suffered a devastating blow fewer than two years ago when Goldsmith, who had been pivotal in organizing logistics, medical care and funding for Solomon, died unexpectedly.

“It was a real loss for us and he is really missed. It affected every aspect of my running,” Solomon says. “We were like brothers.”

Solomon had hoped to compete for Israel in the Tokyo Paralympics this summer, but with the qualifying time reduced from 3:15 to 2:30, his goal is to now run a personal best of under three hours.

“The difference in the qualifying time is 45 minutes, so I am not there. I won’t lie. I don’t compare myself to others and I have my own challenge: to run a marathon in less than three hours,” he says. “I hope that I succeed if not this year, then next year.” 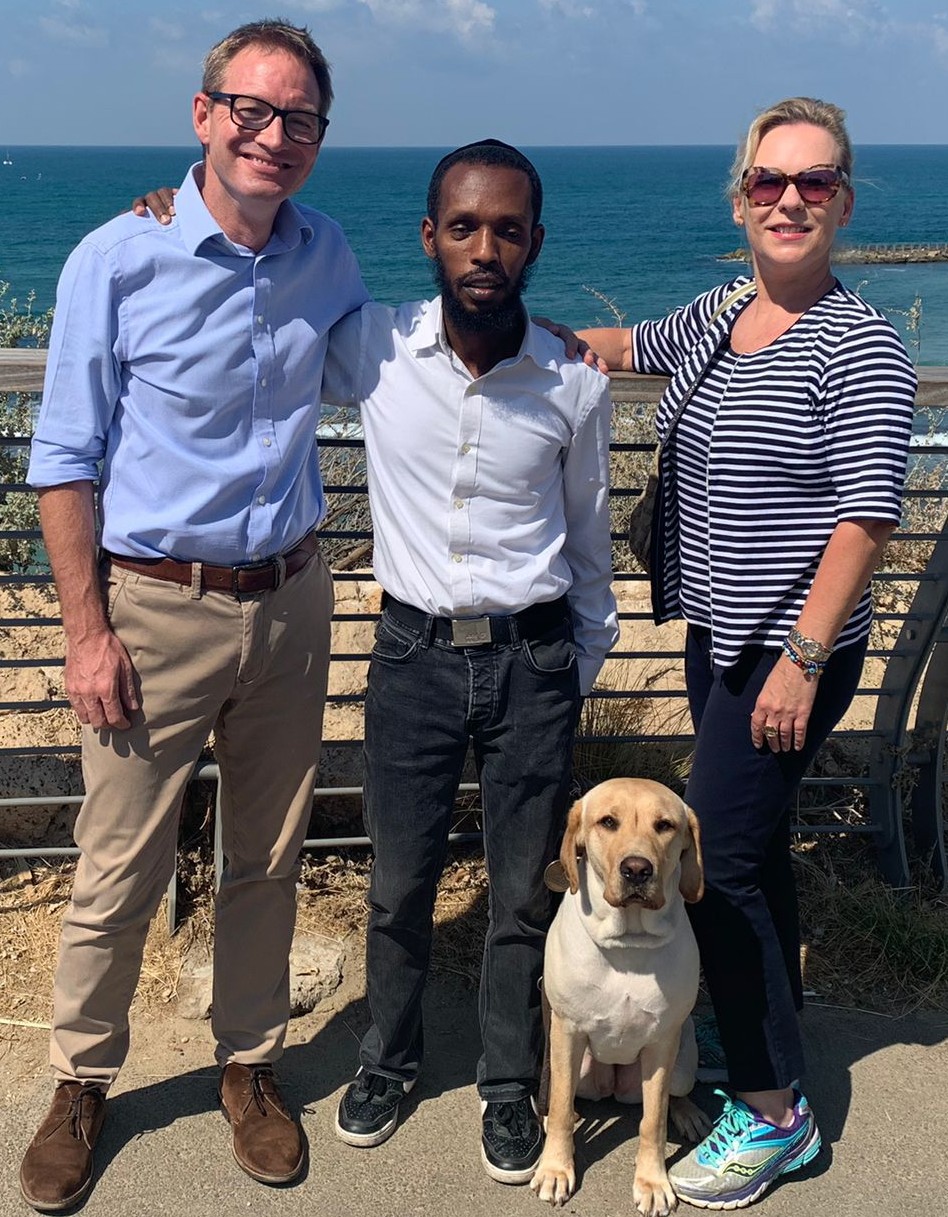 Solomon’s 10-year-old son, Lior, comes home during our interview and convinces his dad to take him along to Jerusalem for his scheduled activity at Afikim.

Lior puts the harness on Nike while Solomon gets his suitcase of equipment.

“Becoming a father is something I always dreamed of since I was very young,” Solomon confides as he gets ready. “I had very exact plans about it.”

He even traveled to Ethiopia to find a wife.

“I always dreamed of getting married in Ethiopia, and when I met Tehila I liked the seriousness of her personality. She was quiet and connected to people. She had the ability to understand a situation,” he says.

Even with the daily domestic pandemonium of having all the children at home, Solomon says, raising a family has been his greatest success.

“There is always a lot of action at our house, like in every house, and I get no free passes from my children because I am blind,” he says. “My biggest victory has been raising my family. I know there is a continuation.”

As the car enters Jerusalem via Hebron Road, Solomon tilts his head upward and says: “We are in Jerusalem now, aren’t we? I can feel the change in the air.”

A group of children is waiting for him, and Nike is a big hit. 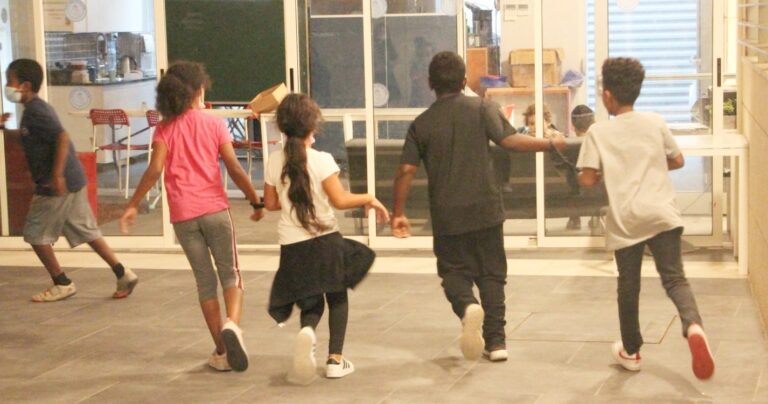 Children in the afterschool program of Afikim in Jerusalem practice running “blind” with a running guide, an activity led by blind Israeli-Ethiopian marathon runner Avi Solomon. Photo by Judith Sudilovsky.

Solomon explains to the children how Nike helps him get around and what it feels like to be blind, asking them to cover their eyes. Then he takes out his equipment: walking sticks, extra harnesses, large balls with bells inside for playing goalball.

Solomon is not fazed by the shrieks and laughter of the children echoing off the walls as they run around the sports hall in teams of two trying out the gear.

Having overcome his own hurdles, Solomon said, he feels a connection to children who are also facing challenges.

“I was also in these types of afterschool places, where we did homework and I got support, so I understand the kids. I have always wanted to volunteer and help,” he says. 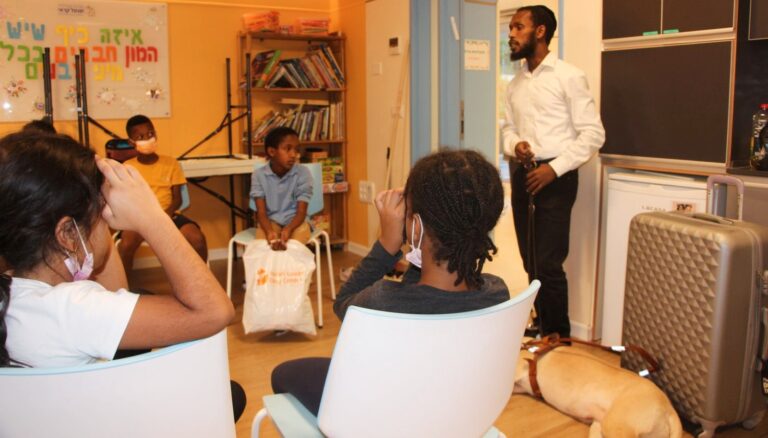 Avi Solomon speaking with children at Afikim, accompanied by his guide dog and a suitcase full of sports equipment for the blind. Photo by Judith Sudilovsky.

Solomon believes the difficulties he was forced to confront early in his life have helped him keep things in perspective.

“My two main role models were my parents, who despite all the difficulties they experienced kept going,” Solomon says.

“I know that a person who is focused on a goal, no matter what, will achieve it. Sport for me is my testament to my mother, [who taught me] how to do everything; how to deal with difficulties; how to deal with success and failure and to do what is good for you,” he says.

“She really supported me. I know she is up there watching and prays and worries for me so I will succeed and that if I fail, that I turn the failure into a success.”

Everything has a purpose

When his marathon days are over, Solomon hopes to continue running locally and to find steady employment in the field of sports.

“Seeing me run makes people want to run and challenge themselves. They ask me how I can run though I am blind, and I explain to them and then they understand it is possible,” he said.

Shortly after our interview, Solomon began training in earnest for the Abu Dhabi marathon, which took place on Nov. 26, while still undergoing physical therapy for his injury. 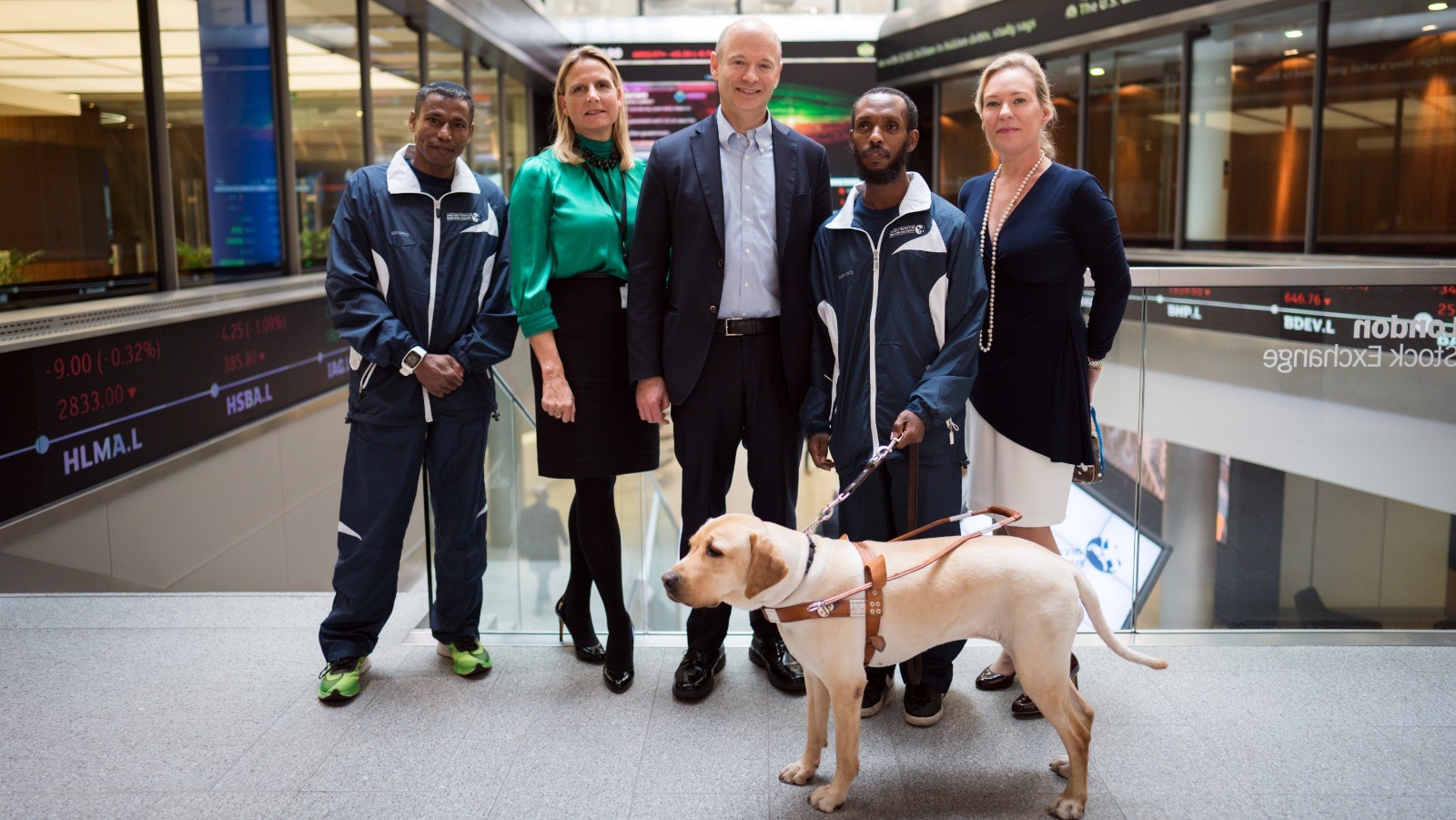 In a statement before the race, he told supporters: “I know there are a lot of good people in the world … and I believe that my presence at the marathon, and of all the people who will be with me there, can only add another spice to the creation of connections between Israel and Abu Dhabi.”

In Abu Dhabi, Solomon and his 15-member team were warmly welcomed and took part in a Shabbat dinner hosted by the local Jewish community, which came out to support him during the marathon—a race he went on to complete with running partner Berhano in three hours, 22 minutes and 24 seconds.

He was accompanied by, among other supporters, Justine Zwerling, cofounder of the Gulf-Israel Women’s Forum and head of Primary Markets, Israel at the London Stock Exchange.

How does Avi manage his busy life?

“I am hyper; I don’t like to sit a lot. Everything that has a purpose to it, I will do what I need to succeed.”