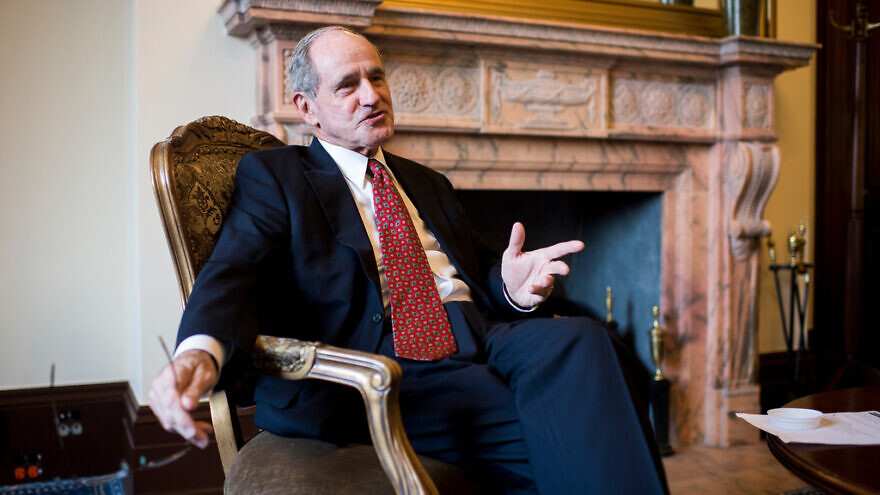 (December 23, 2021 / JNS) In the estimation of U.S. Sen. James Risch (R-Idaho), the future of the Iran nuclear deal (JCPOA) “is going to be resolved by Israel” rather than by the world powers who are actually negotiating with Tehran.

“The Israelis have sat across the table from me for years, looked me in the eye, and said, ‘Iran will never have a nuclear weapon.’ And I believe them,” he says.

In the following interview with JNS, the former chair of the Senate Foreign Relations Committee and currently its ranking member also shares his candid views on Israel’s right to proactive self-defense, the U.S.-Saudi relationship and Turkey’s reliability as an American ally.

The interview has been edited for clarity and brevity.

Q: What do you think is going on with the JCPOA now that we’ve finished the seventh round of negotiations?

A: Well, first of all, it was my considered thought after meeting with the people who were coming into the administration when they told me what they were going to try to do with the JCPOA that they shouldn’t meet with the Iranians. There’s no deal that’ll come out of that that I thought would come close to what we needed, so I was opposed to them even meeting with [the Iranians]. I’m opposed to them continuing to meet with them, and nothing’s happening obviously, which is a good thing.

They were going to try to get into the JCPOA the way it was. It was awful then, it’s worse now, and so I’m glad the thing is not moving forward. And I’ve got a different view than the world on this or than a lot of people in the world on this.

[The Israelis] commit that they won’t allow that to happen. I believe them. I really do. And they also say, which I agree with, and even our own administration agrees with it, and that is that they have the right to defend themselves and so I have told our administration instead of focusing on the JCPOA, I would like them to focus on having answers for what happens when they get the call. Not sit around and talk about it, what happens when they get the call and Israel says we’re going. Not will see should we do this, should we do that, let’s get everyone together and talk about it.

The other way that you can look at this is you have this negotiation going on, not with us, but the people sitting at the table are the Russians and the Chinese and the Europeans. Well, what could possibly go wrong there?

I mean the Europeans are notoriously weak, the other two certainly don’t have our interests on the table, so look, they should just back away from this and cooperate with the Israelis and this thing will be just fine. Now, the things I’m telling you, I’m sure that the Iranians know. If I know it, certainly the Iranians know that. They’re the ones who are going to make the choices as to where this thing goes.

Q: Should we give Israel the massive ordinances and the means to deliver them?

A: Yeah, we cooperate with them to do whatever they need to defend themselves. Because a lot of that is classified, I can’t go into that but generally the answer to your question is they need to be and are equipped to deal with this and the Iranians in all likelihood also know that. This would be a very short conflict.

Q: Is Iran just an Israeli problem, or is it an American national security problem?

A: Sure, it’s a national security problem for us too. I mean [the Iranians] feel and say the same things about us as they do about Israel. Our interests and our view of the world, and our freedoms and democracy, and our everything else are congruent virtually with Israel — and that’s very foreign to Iranians.

Q: Do you feel American troops should remain in Syria in Al Tanf, and what do you think about President Biden not responding to the attack on American soldiers in Al Tanf?

A: Separate those two questions. On the first question, at the present time my answer is yes. The numbers are quite small as you know, but meeting the objectives we want matters, so for now I have no difficulty with [leaving U.S. soldiers in Syria].

As far as Al Tanf is concerned, I have a view that any time something like this is done, in order to restore deterrence and to see that the price is paid, there should be something done. Now I’ve sat at the table in the last administration and helped with those decisions.

I thought that the decision that President Trump made when [Qasem] Soleimani was taken out was absolutely masterful and of course our Democrat friends around here are very much in disagreement with that. Some of them are even calling it illegal. That’s how you restore deterrence. You don’t have to pick at it all the time. but when you do something, make sure they understand the message loud and clear, and make sure it’s painful and that particular action was very painful for the Iranians.

Q: What about when the Saudis were hit at Aramco oil and there really wasn’t a response?

A: That was a matter that was discussed at length, and included in those discussions were the Saudis, and a decision was made as it was made, and that’s all I can say about it.

Q: So, the Saudis very much want to come back into America’s favor somehow. Have we been too hard on Saudi Arabia?

A: You know I think that that is a question that is addressed individually to each senator. Some senators want to be much more harsh on Saudi than we were. Others not.

Look, the Saudis have taken some, have made some moves that they themselves would say could have been done differently. But they’re an ally of ours, and I think it’s important that you deal with an ally in a way that you don’t disrupt or for that matter debilitate the alliance. That’s my position on it. There are things that need to be addressed.

I think that the Saudis are doing their very best to address those and I know that they come to us not in a pompous, arrogant mind-your-own business way. They come to us with a “Hey, let’s talk about this.”

Q: Has the Biden administration slow-walked the Abraham Accords in terms of getting Saudi Arabia to join them?

Whatever else you think about the prior administration, you should not ignore the really, really good things that they did. The Abraham Accords in my judgment are a turning point, a milestone, a historical point in the history of the Middle East. And I have encouraged as everyone has, to go further, to solidify those agreements, act on those agreements, execute them.

Q: What are your feelings about [President Recep Tayyip] Erdogan and about Turkey as an ally?

A: Look, Turkey has been a great ally of ours over the years. I’ve always been impressed by how the country since Atatürk and the New Turkey has done. They’ve made great progress going forward.

With Erdogan, there’s been a considerable backsliding. He wants to move the country in a different direction than what Atatürk had when he set that thing up and moved the country to where it is. We’re hopeful. Our relationship has been frayed. We’re hopeful that that turns around but it’s up to him, not up to us.

To me the straw that broke the camel’s back was the S-400s, and I had a conversation like this with Erdogan in the Oval Office. I explained to him very carefully where we were on it, and he was not impressed and said as much, “Look, we’re a sovereign country, we’re going to go our own way,” and I explained to him that yes, you are a foreign country, but you also have obligations as a NATO ally.

His response to that was not satisfactory as far as I was concerned. They paid for five F-35s and I’ve got to sign off for their delivery. I told him this: Those F-35s will never leave the United States so long as there’s S-400s in Turkey.

Q: Should Turkey face consequences from the U.S. for actions like housing offices for Hamas?

A: I meet fairly regularly with the Turkish ambassador [to the U.S.]. The Turkish ambassador is a good friend of Erdogan’s. Their personalities are 180 degrees. I get along with him well. I explained to him where we are on all of these things and that there are going to be continuing problems between us that will be not helpful for them. We’ve already removed — they were making 900 parts of the F-35 — we’ve pulled all that out of Turkey. That’s gone. And yet they continue this. We’re certainly not going to back off on this and the more things they do like this, the more difficult it will be for them.

Dr. Eric R. Mandel is the director of MEPIN, the Middle East Political Information Network. He regularly briefs members of the U.S. Senate, House and their foreign-policy advisers. He is a columnist for “The Jerusalem Post” and a contributor to i24TV, “The Hill,” JTA and “The Forward.”