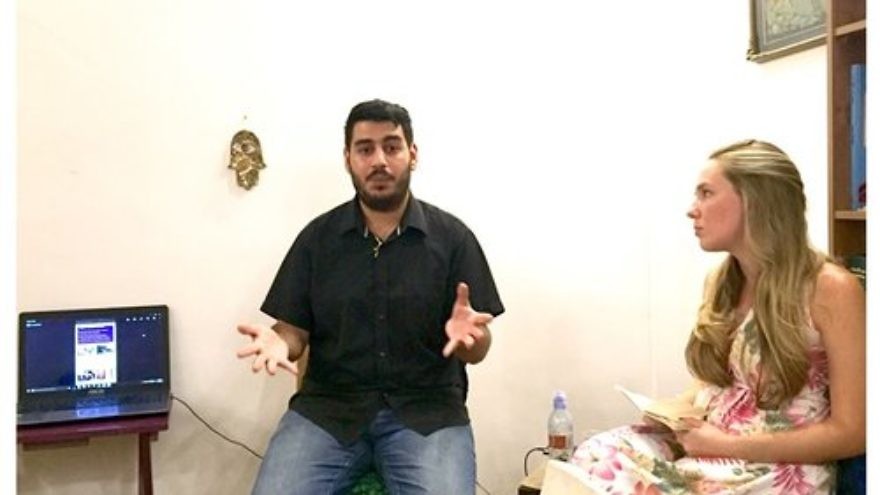 In the Gatestone Institute’s August report on Christian persecution, Raymond Ibrahim described the brutal, rampant and global Islamic persecution of Christians and other minorities, including violations of religious freedom, harassment, detention, torture, and executions. The accounts are too abundant and tragic to list in full, as many involve gruesome persecution, murder, and rape happening in Eritrea, Iran, Syria, Iraq, Uganda, Bangladesh, Congo, Philippines, Egypt, Tanzania, Pakistan, Germany, Azerbaijan, Turkey, and Nigeria. Ibrahim concluded, “such Muslim persecution is not random but rather systematic, and takes place in all languages, ethnicities, and locations.”

Such was Jonathan Elkhoury’s conclusion when he spoke last week at the Jerusalem Salon, an organization bringing English lectures and discussions to Jerusalem, about his experience fleeing from the Lebanese terror group Hezbollah’s rule in Lebanon. Elkhoury fled to Israel with family after his father, a former South Lebanon Army (SLA) officer, had to leave his homeland during Israel’s withdrawal in May 2000. Now that he’s found safe refuge in Israel, Elkhoury writes and talks about the situation of Israeli Christians and minorities to various audiences and advocates for the Christian Empowerment Council (CEC) in Israel. Elkoury concludes that to improve the life of Christians everywhere, Israeli Christians should speak out about their positive experiences as minorities in Israel. “The Christian society is one of the successful minorities in Israel,” he said. “There are people in high positions in education, in hospitals, courts – everywhere you look you will find a Christian in a high position. They are a quiet yet successful community, and they are not speaking out enough.”

In 2000, when some 1,200 South Lebanon Army families escaped to Israel, the Israeli authorities provided for them, including his own. “We got a lot of help from the Israeli society,” Elkoury said. “We were welcomed because of the SLA’s contribution to Israel. Many people gave money to us so we could have trips, study about Israel, and learn more. They tutored us, and did everything to make us feel comfortable and feel at home. Our role as Christians in Israel is to show a different story to the media by telling our personal stories about our lives here in Israel. At my school, more than 50 percent of the students are Arabs and they have an extra half an hour on every test. The education system is doing everything so minorities can succeed and have good grades. We need to show people what is going on in our lives. There are a lot of people trying to use the 130,000 Christians in Israel for a political, anti-Israel agenda, and people are not speaking out.”

The unfortunate reality is many of these people are scared to speak out in support of Israel, as the Arab population of Israel views them as traitors to Lebanon and to Hezbollah. “I was nine years old when we moved here, and I needed to go to school,” he said. “Two days after we landed in Israel, the Arab schools didn’t accept us and said we were traitors that we betrayed our country, and we will not be accepted by their society.” Elkhoury chose to speak to Arabic speakers in Hebrew, out of fear of them recognizing his Lebanese accent, rejecting him, and even threatening him. He still gets some threatening messages and is constantly afraid something will happen to his family in Lebanon.

Nonetheless, he recognizes that the Arab and Muslim rejection that Christians face is much worse in Lebanon, the Gaza Strip, and the West Bank. “Their churches are destroyed and they are persecuted,” he said. A priest was killed two years ago in the Gaza Strip. A temple was lit on fire. The bishop was attacked on Christmas Eve in the West Bank, and nobody is talking about it. We must show this side of the story that nobody talks about.”

People don’t talk about their experiences until they leave the oppressive countries out of fear of being killed. Indeed, Christians are leaving by the thousands. In Lebanon, Christians once numbered 80 percent of the population but were driven out and now are a mere 20 percent. And the same thing is happening in Bethlehem, where, in 1995, Christians numbered 20 percent of the population, while today they’re just two percent. “You can’t imagine their stories,” Elkoury said.

As for his family, they’re doing well in Israel. His father tells him, “I know that I was successful in my choice [to come to Israel] if you are successful in your life.”  Elkoury, like his father, is optimistic about the future of Christians in Israel and in the Middle East. “More and more Christians are aware of what is happening in the Arab world and in Israel. I think we are heading towards a better future,” he said. Indeed, through telling his story and educating the Christian sector, Elkoury is one of the few people creating that better future for his fellow Israeli Christians and Christian minorities around the world.

Eliana Rudee is a fellow with the Haym Salomon Center and the author of the “Israel Girl” column for JNS.org. Her bylines have been featured in USA Today, Forbes, and The Hill. Follow her column on JNS.org.