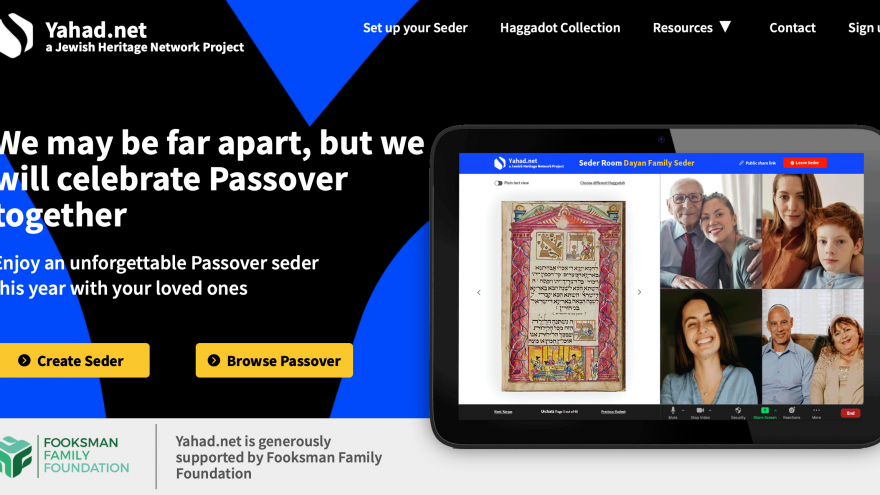 The first upgrade includes a near doubling of haggadot that participants can choose from, now at nearly 50 which span most ethnic, language and religious varieties in the Jewish community. On a technical level, the new split screen feature not only enables participants to follow the seder at their own pace, but also allows them to track it with a table-like atmosphere of seeing and speaking with fellow attendees, helping to infuse engagement. Updates this year also include designated seder leaders and functions that allow users to jump ahead between different haggadot and back to the leader’s page without impacting the view of other participants in their virtual room.

Also new for this year is the platform’s capability to be used as a tool for synagogues, congregations and other communal groups. Rabbis and community leaders can utilize Yahad to invite up to 1,000 participant screens to their seder in place of the large in-person gatherings they might have held pre-pandemic. Museums and Jewish centers have already reached out to coordinate specialized events, which include tailored mini-sites, custom selections of haggadot and more. Groups looking to coordinate their larger seder can reach out to info@jhn.ngo for more information.

Passover this year will be celebrated across the Jewish world from sundown March 27 through April 4. Through Yahad’s website, seder hosts can create their own virtual meeting rooms, invite their friends and family members using secure codes, and interact with each other via video and audio while following along in the seder text.

Presented by the Jewish Heritage Network (JHN), Yahad is a partnership between the Fooksman Family Foundation and dozens of content partners including Jewish institutions and museums who have uploaded haggadot in English, Hebrew, Yiddish, Russian, Spanish, Portuguese, French, and other languages.

Yahad created its virtual seder platform in six weeks last year as it became apparent most of the world would enter lockdowns from the COVID-19 pandemic and prohibit Jewish families from gathering together to celebrate the Passover seder. Yahad “hosted” more than 230 virtual seders last year that they believe served several thousand Jews worldwide. The inability to get together was particularly difficult for elderly or immunocompromised people, many of whom were left on their own to conduct a seder. In some cases, people who joined with family for the seder in the past had never led a seder themselves because they relied on others. The virtual solution was a way to connect and celebrate the holiday digitally.

“Passover has always been very special to me and my family. The seder was the single Jewish holiday celebration that my generally secular Soviet-Jewish family gathered together for each year. While the rest of us would connect with one another, my grandfather would quietly recite the seder from the haggadah he had kept hidden while in Russia. Looking back all these years later, I realize how important that Jewish encounter was for my entire family,” said JHN CEO Pavel Kats. “When I realized the pandemic would impede Jews’ ability throughout the world to celebrate, I wanted to use my technology experience to help families and friends unite from wherever they might be in order to continue the holiday’s traditions.”

“Passover is usually a time when we gather together with family and friends and while the pandemic has stopped many of us from doing so, we aimed to create a platform that would offer as close to an in-person experience as possible. I grew up in a normal Soviet family that was devoid of Jewish experience, except for the special cookies I ate on Passover. When we had the opportunity to contribute to the broader Jewish community last year, we seized on that. Because the platform was so successful, we wanted to make it even better this year,” said JHN Technology Lead Alexander Raginsky.

Jewish Heritage Network
Jewish Heritage Network (JHN) is a global network of Jewish heritage institutions and a platform of digital services for them to expose collections online and reach various audiences. JHN is an accredited partner of Europeana, the leading digital culture initiative of the European Commission. For more information, please visit https://jhn.ngo.
Publish your organization's press release on JNS Wire
Releases published on the JNS Wire are communicated and paid for by third parties. Jewish News Syndicate, and any of its distribution partners, take zero responsibility for the accuracy of any content published in any press release. All the statements, opinions, figures in text or multimedia including photos or videos included in each release are presented solely by the sponsoring organization, and in no way reflect the views or recommendation of Jewish News Syndicate or any of its partners. If you believe any of the content in a release published on JNS Wire is offensive or abusive, please report a release.