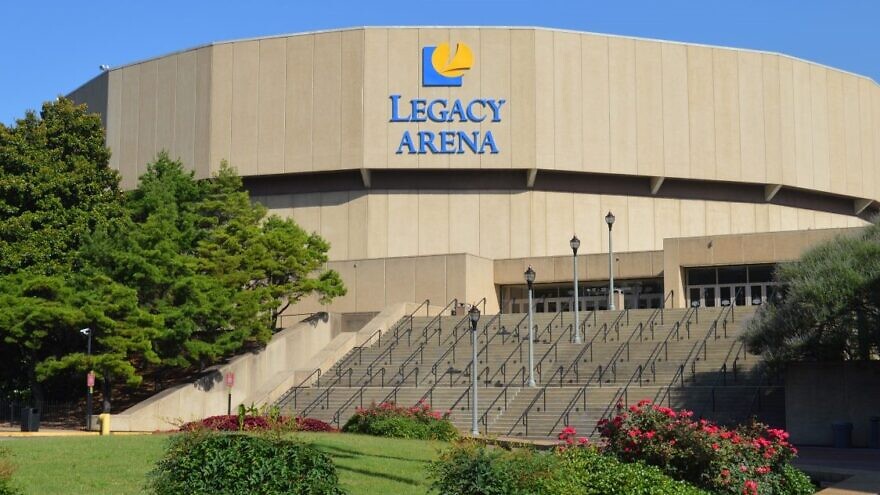 (July 10, 2022 / Israel InSight) As Israel’s delegation marched into the 2022 World Games opening ceremony on July 7 in Birmingham, Ala., there was an unexpected intrusion as an activist who was a volunteer for the games was able to get next to the team and march next to them waving a Palestinian flag for several seconds.

Jeff Emerson, a spokesperson for the World Games, said “this behavior is not in accordance with the training all volunteers have gone through to show respect to our guests, and this volunteer was immediately removed from the volunteer program. The World Games 2022 has apologized for this incident to the Israeli Consul General Anat Sultan-Dadon and apologizes to the delegation from Israel.”

In an Instagram post, Hekmat Aboukhater, a Syrian living in Birmingham, said he was “about to piss off some people.”

In the post, which started in the room where the delegation flags were held, he noted that Ghana had to drop out of the games, so he was going to take advantage of the opportunity.

“I hope you’re happy your pole is now bearing the Palestinian flag,” he said to the Ghana delegation in his post. He then apparently hid in the bathroom with the Palestinian flag until it was time to go to the parade of nations, and made his way next to the Israelis.

As Israel was announced, he started waving the Palestinian flag in front of the Israeli flag, then noted “I got kicked out.”

He added “Peace for the Palestinians” and the name of Shireen Abu Akleh, an Al Jazeera journalist who was killed in the crossfire between Palestinians and the Israel Defense Forces during an anti-terrorism raid in Jenin on May 11. Palestinian activists have accused Israel of targeting the journalist intentionally, but it remains inconclusive as to which side fired the fatal shot. 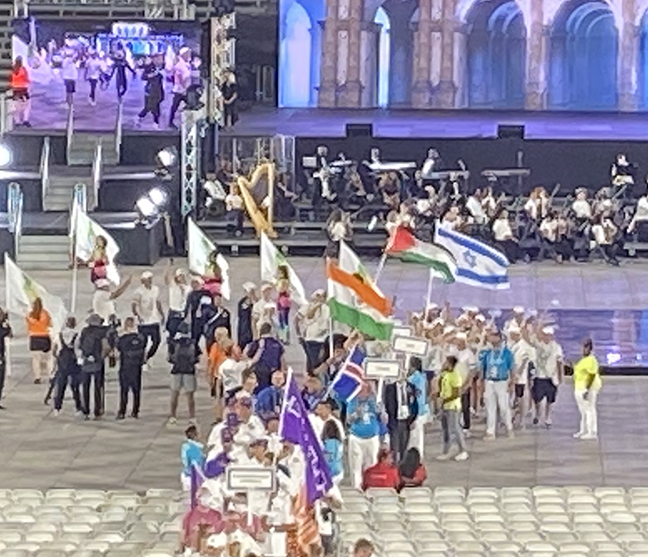 As Israel’s team made its way into Protective Stadium during the World Games opening ceremony, an activist was able to get near and wave a Palestinian flag, July 7, 2022. Credit: Courtesy of Larry Brook/Israel Insight.

‘No provocative attempt will diminish our pride’

According to his LinkedIn profile, he is a 2020 graduate of Boston College now living in Birmingham and a Venture for America Fellow.

All volunteers for the World Games must be vetted by the FBI. The World Games was given a level one Special Event Assessment Rating, making it on par with events like the Super Bowl, and providing resources from the FBI and Department of Homeland Security, among others.

Security is always of particular concern to Israel, given that 11 members of Israel’s Olympics team were murdered by Palestinian terrorists at the 1972 Olympics in Munich.

Arik Kaplan, president of Ayelet, the Federation of Non-Olympic Sport in Israel, said this “should not have happened, and in another situation, it could have ended in a much more unfortunate way.”

Nevertheless, he noted that the Israeli delegation was received “with applause and great love” when they entered the stadium, receiving one of the louder ovations of the evening.

Kaplan also noted that one of the Israeli coaches, an Arab Christian who had not yet arrived at the games, said he saw the footage from the ceremony and “felt insulted.”

Sultan-Dadon, who is based at the Israeli consulate in Atlanta and was attending the opening ceremony with several consulate representatives, brushed the protest aside, saying that “no provocative attempt will diminish our pride.”