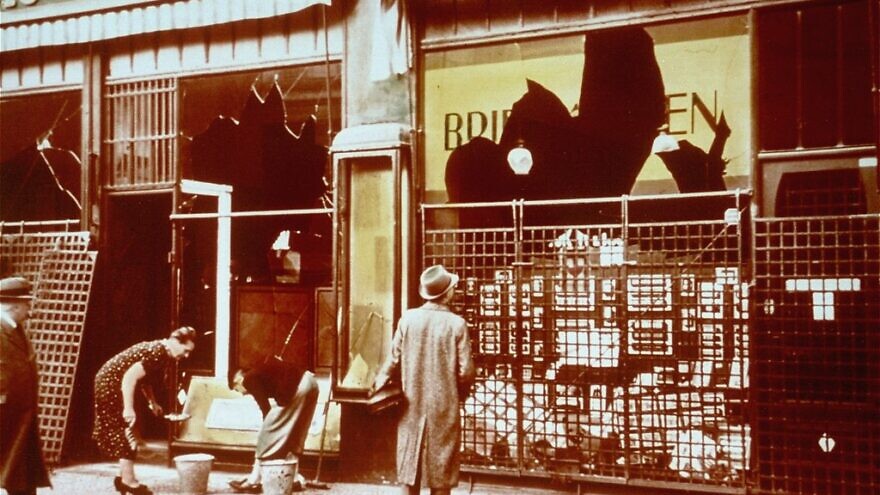 Assessing some of the damage after Kristallnacht, “The Night of Broken Glass,” in Germany on Nov. 9-10, 1938. Credit: The United States Holocaust Memorial Museum.
Spread the word.
Help JNS grow!
Share now:

(November 9, 2022 / JNS) In commemoration of the 84th anniversary of Kristallnatcht (the “Night of Broken Glass”) in November 1938—when the Nazis ransacked synagogues and Jewish businesses, and murdered Jews in Germany—the Conference on Jewish Material Claims Against Germany (Claims Conference) is relaunching its digital campaign #ItStartedWithWords.

#ItStartedWithWords is an educational campaign featuring survivors from the around the world who share memories that led up to the Holocaust. Notable survivors such as Abe Foxman, Colette Avital and several others recorded videos which illustrate how anti-Semitic speech and hatred, left unchecked, led to the mass murder of 6 million Jews.

“With the growing prevalence of Holocaust denial, distortion and hate speech on social platforms and in communities cross the country, the core message behind the #ItStartedWithWords campaign become even more important: The Holocaust did not start with camps, ghettos and deportations; it started with words of hate,” said Greg Schneider, executive vice president of the Claims Conference.

In addition to the Holocaust survivor-led digital campaign, the Claims Conference also maintains ItStartedWithWords.org, a website that serves as a resource for educators worldwide.

A survey by the Claims Conference in 2020 found that 63% of Millennials and Gen Z did not know that 6 million Jews were murdered in the Holocaust.