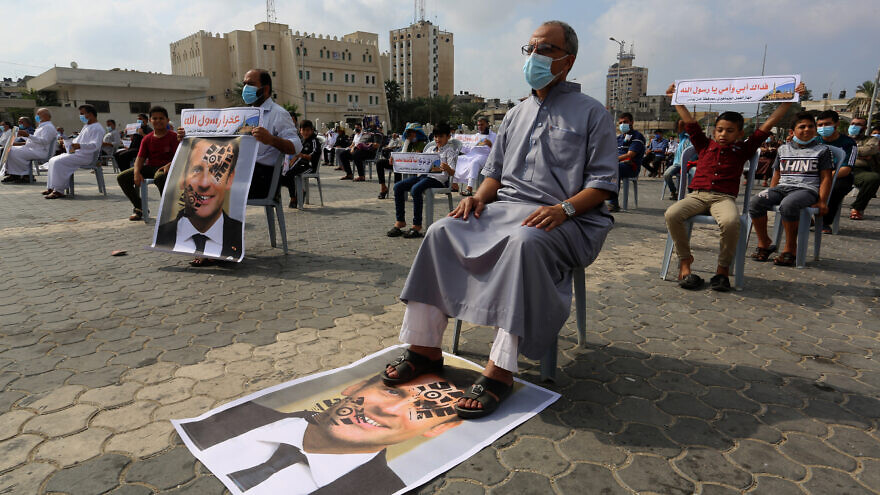 Palestinians protest against the publications of a cartoon of Prophet Mohammad in France, as well as French President Emmanuel Macron's comments on Islam, in Khan Younis in the southern Gaza Strip on Oct. 30, 2020. Photo by Abed Rahim Khatib/Flash90.
Spread the word.
Help JNS grow!
Share now:

(October 30, 2020 / JNS) Hundreds of people demonstrated at the Temple Mount in Jerusalem on Friday against French President Emmanuel Macron and his pledge to protect the right to caricature the Islamic prophet Muhammad with three arrested for disorderly conduct after scuffling with police.

The protesters chanted: “With our souls and with our blood we sacrifice for our prophet, Muhammad.” They also called Macron “the enemy of God.”

Reportedly, a march of hundreds of Palestinians against Macron took place in Jerusalem’s Kafr Aqab neighborhood and in the neighboring Qalandiya refugee camp.

“Demonstrators wore headbands declaring insulting Muhammad to be a red line and waved flags emblazoned with the Islamic declaration of faith,” reported The Times of Israel.

The protests come after Macron said on Oct. 2 that Islam was “a religion in crisis” and that there was a need for an “Islam of Enlightenment.” He also said there was a need to “free Islam in France from global influences.”

On Thursday, a knife-wielding assailant shouting Allahu Akbar (“God is great” in Arabic), beheaded a woman and stabbed two other people to death at the Notre Dame church in Nice, France.

Hours later, a man shouting the same and threatening passersby with a gun was killed by police in Montfavet near Avignon.

The attacks come in the wake of the beheading of 47-year-old middle-school history teacher Samuel Paty in Paris on Oct. 16.

Paty was murdered by 18-year-old Chechen immigrant Abdoullakh Abouyezidovitch Anzorov for showing his class caricatures of the Islamic prophet Muhammad during a lesson dealing with freedom of speech. The cartoons in question were those published in 2015 by the satirical French weekly Charlie Hebdo, for which the entire editorial staff was gunned down by terrorists.

Four days later, Macron announced that a pro-Hamas group was involved. Since that attack, France has raided dozens of Muslim organizations and shut down a mosque, as well as several Islamic aid organizations.

Also on Thursday, a man was arrested in Saudi Arabia after attacking and wounding a guard at the French consulate in Jeddah.

Last month, an 18-year-old of Pakistani origin wounded two people with a meat cleaver outside Charlie Hebdo’s former offices in Paris, according to the BBC.