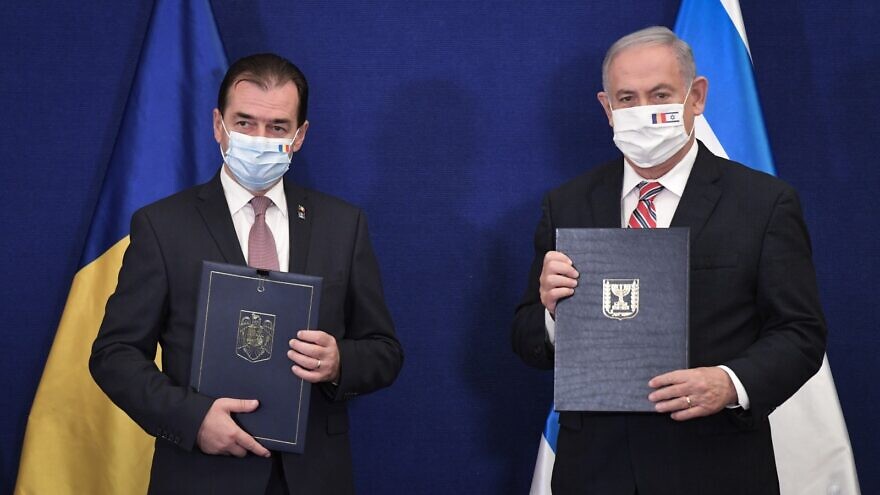 (November 3, 2020 / JNS) During a meeting on Tuesday in Jerusalem with visiting Romanian Prime Minister Ludovic Orban, Israeli Prime Minister Benjamin Netanyahu expressed his appreciation for Bucharest’s assistance over the years in presenting a “sensible case” to the European Union on Israel’s behalf.

Referring to Israel’s recent forging of U.S.-brokered peace agreements with the United Arab Emirates, Bahrain and Sudan, Netanyahu said that these Arab countries “obviously have a different view of the situation … in the Middle East than some of the traditional bureaucracies of the E.U.”

Netanyahu also stated that Israel “will continue to value [Romania’s] assistance in explaining to the E.U. the changing circumstances in the Middle East that are advancing peace and prosperity for all.”

According to the Prime Minister’s Office, Netanyahu began the meeting by addressed in Monday evening’s terrorist attack in Vienna.

“A few moments ago, I spoke to our colleague, [Austrian Chancellor] Sebastian Kurz, [and] told him that the people of Israel stand with Austria, as I know the people of Romania do and so many others, against the savagery of Islamist terrorism,” said Netanyahu. “We are cooperating … with our intelligence and [in] every other way that we can.”

“The same is true of corona,” he continued. “I spoke yesterday to my friend [Greek Prime Minister] Kyriakos Mitsotakis … to see how we can cooperate on corona, and just recently … with our colleague [Czech Prime Minister Andrej Babiš] to see again how we can cooperate and help each other in this. This is something that happens as a matter of course with Romania. Our friendship has been very, very powerful between the people of Israel and the people of Romania. We have hundreds of thousands of Romanians who came to Israel, and they’re a human bridge … .

“We are committed not only to our common past but to a future. And the future belongs to those who innovate,” he said. “Innovation is the key to assuring the prosperity, safety and health of our people in the future. And in this, Israel and Romania are cooperating in many fields: in cybersecurity, water management, agriculture, health, space and many other areas.”

“But the most important thing,” he stressed, “is that our business sectors, our business people, our entrepreneurs … cooperate. And for this purpose, we’re going to sign today a treaty on avoiding double taxation, which from my experience has always enhanced trade and investments in a very rapid way. So, I think this is very good news for Romania and for Israel.”