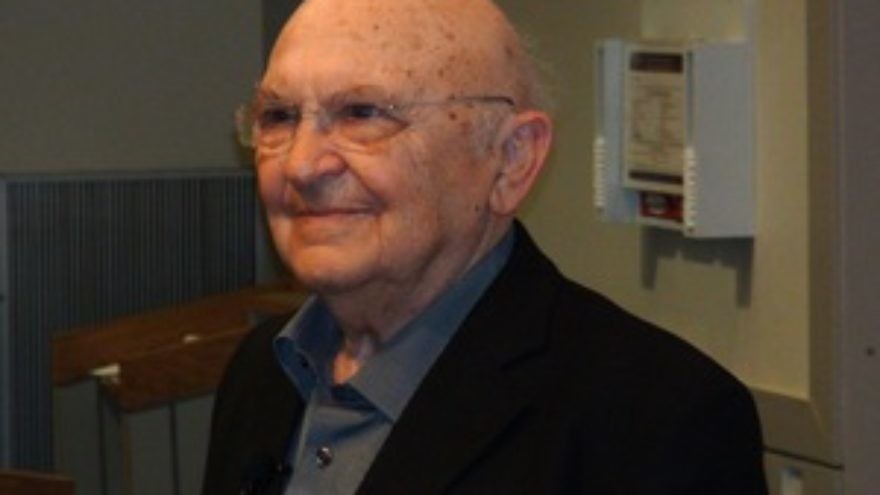 One would not expect a novel about a battered woman and her protectors, identity confusion, and murder to be written by a male septuagenarian Holocaust survivor. But as one of Aharon Appelfeld’s characters says, “Contradictions don’t put me off.”

Appelfeld’s newest novel to appear in English—Until the Dawn’s Light, published in Hebrew in 1995—draws on his experiences surviving World War II by hiding with criminals between the ages of 8 and 14. Appelfeld, author of 39 books, is a master storyteller and allegorist. He recently made his first visit to the U.S. in a decade, for a two-day conference on his life and work at the University of Pennsylvania.

This novel, set at an indeterminate time in pre-World War II Europe, features a Jewish woman, Blanca, who converts to Christianity to marry a non-Jewish man, Adolf, who abuses her. Blanca does not take care of her father once her mother has passed away, allowing her father to return alone at night to an old age home (Adolf will not let him in their home), and the father goes missing.

Blanca gives birth to a child and can’t tell the news to her blind grandmother, who stands outside the now-closed synagogue, cursing the converts. She is afraid to speak to her grandmother because of her disapproval of Blanca’s conversion and marriage to a non-Jew.  The irony in their world is that when the man from the burial society says “We Jews stand by one another” at the funeral of Blanca’s mother, the crowd realizes “most of them were converts.” Yet, there is still a core of faith in them—Blanca remembers her mother saying “There is a God in heaven and he watches over all his creatures.” Her father argues that this is her ancestors’ faith not her own, yet her mother counters, “mine too, if I may.”

The attenuated Jewish faith of Blanca the convert, abused by her Christian husband and his family, is preserved through the ministrations of Dr. Nussbaum, whose own daughter Celia, Blanca’s classmate, discovers how Jewish she feels reading Martin Buber in the convent Celia has joined. Celia has come to realize that her Jewish forebears “were truly the flesh of her flesh.”  Dr. Nussbaum’s care for Blanca and her child helps him cope with being cut off from his daughter the nun.

However, like Appelfeld himself said last month in Philadelphia that he had “no messages, only words,” Blanca sinks “deeper and deeper into writing” to create her life and memories through her imagination. Blanca comes to realize that “Death isn’t darkness if you take your dear ones with you. It’s just a change in place.” Blanca and the people around her are living in a world on the cusp of being destroyed, and their hope is to find a way out.

Contradictions and all, Appelfeld has again shown readers the way that fictional Jews in the liminal world of Europe between the wars coped with the uncertainties of their lives.

Acts of Kindness: Small and Large

According to the Jewish calendar, we are now immersed in the month of “Mar Heshvan”—“bitter” Heshvan—since it contains no holidays, only ordinary time. This calls for a book about ways to improve and better ourselves as well as the world around us, precisely in ordinary time.

Linda Cohen’s 1,000 Mitzvahs: How Small Acts of Kindness Can Heal, Inspire and Change Your Life (Seal Press), suggests that thinking of others creates all kinds of positive effects.

After her father died, Cohen decided to memorialize him through 1,000 small acts of kindness.  Cohen’s husband, a software engineer, created a blog to track her activities. Many of her suggestions are small ones—give a kid a ride, write a thank you note, carry a stranger’s bag if they need help, don’t hold a grudge. Some are larger—organize a food drive, volunteer at an organization, change your habits. All are suggestions to empower yourself to do more to make our world a more livable, kinder and better place.

The greatest exemplar of kindness in the Jewish tradition is the Moabite convert, Ruth. A new commentary, The JPS Bible Commentary: Ruth, is a collaborative effort between the late Professor Tikva Frymer-Kensky of the University of Chicago and Professor Tamara Cohn-Eskenazi of Hebrew Union College.

The Jewish Publication Society’s mission is to make the best aspects of the world of Jewish scholarship accessible to the common reader, and this volume is a wonderful place to begin. The introduction, providing both scholarly background and an overview of modern readings, is particularly useful.

The Beginnings of Israel

As part of Schocken’s Nextbook series, Israel’s first prime minister, David Ben-Gurion, has been profiled by Shimon Peres in conversation with David Landau in Ben-Gurion: A Political Life.  For anyone interested in the history of Zionism and the beginnings of the state of Israel, this is a must read.

Another look at the beginnings of the state of Israel is provided by Meir Shalev in his amusing family memoir, My Russian Grandmother and her American Vacuum Cleaner, ably translated by Evan Fallenberg.

Shalev is a raconteur par excellence, who strives to memorialize the values of hard work and commitment to the farming life that his grandparents and their generation exemplified. This is in contrast with the materialism symbolized by the vacuum cleaner shipped to Nahalal, Israel, by his great uncle, who settled in the capitalist paradise of Los Angeles.

Though Shalev is a wonderful fiction writer and essayist, this reviewer felt the payoff in his tale was not so great as his buildup to it. Still, for anyone interested in the lives of the pioneers of the First and Second Aliyah, and the real details of their day-to-day lives, this book provides a vivid picture of life in the early 20th century.

From Chile to Masada to Puritan America

Another memoir of note out this month is by the Chilean writer and professor Ariel Dorfman, who currently teaches at Duke University in Durham, NC. Dorfman’s best-known work is the play Death and the Maiden, which has been staged in over 100 countries. Dorfman’s story of being forced out of Chile by the coup against the democratic government on September 11, 1973, is an important one by a significant writer.

Two works of fiction recently published—Hugh Nissenson’s The Pilgrim and Alice Hoffman’s The Dovekeepers—are historical novels that use their settings, ancient Israel at the time of Masada and Puritan America, for important effect by established writers. Nissenson is the author of eight previous volumes, including The Tree of Life, a National Book Award finalist. Hoffman is the author of 28 previous works of fiction; she researched this book carefully to bring her historical period to life.

Beth Kissileff lives in Pittsburgh and has taught Hebrew Bible and Jewish studies at Carleton College, the University of Minnesota, Smith College and Mount Holyoke College and for the Florence Melton Adult Mini School in three states. She is the editor of a forthcoming anthology of academic writing on Genesis, and is at work on a novel and a scholarly book of essays on the Bible.