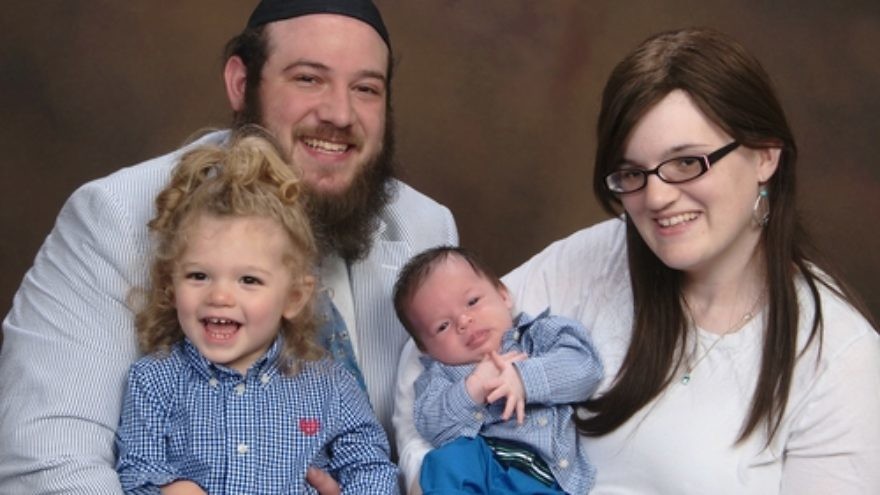 Yissachar “Jason” Schneiderman was diagnosed with cancer while he started his journey back to observance. He says reading the book “The Garden of Emunah” by Rabbi Shalom Arush helped him realize that God “is more patient than anyone,” and that he had time to complete his journey back. Today Schneiderman is married with two children, and describes himself as “a master returner.” Credit: Courtesy.
Republish this article
1319 WORDS
Spread the word.
Help JNS grow!
Share now:

(July 22, 2014 / JNS) Rosh Hashanah, Yom Kippur, and the days in between them mark the season of “teshuva”—which in Hebrew literally means “to return,” but in the context of the High Holidays refers to repentance. A unique case of those seeking to return and repent, or “do teshuva,” are Jews who become less observant but later decide to return to their roots.

Last year’s much-debated Pew Research Center survey of U.S. Jews found that 52 percent of Jews raised Orthodox no longer consider themselves to be so. That figure stands at 64 and 45 percent in the Conservative and Reform movements, respectively.

While a gloom-and-doom picture of rising assimilation seemed to be most observers’ takeaway from the Pew study, the journey of Jews who actually return to an observant lifestyle after initially leaving it behind is a more common storyline than one might think.

Rabbi Yaakov Menken, an early pioneer in the field of Internet-based Orthodox Jewish outreach and the founder of ‎Project Genesis, said there is “usually some cause” for someone Orthodox to choose a different lifestyle, but that “usually it has little to do with religion and a lot to do with religious people—or should I say, people who identify as religious.”

Josh, who asked that his full name not be used because it might embarrass his parents, was raised in a haredi home. He said he found his Atlanta Jewish community “stifling.” Although his parents and rabbis went to great lengths to keep Josh away from outside influences, by 13 he already started “checking out” and by 18 he was “off the derech (path),” or no longer Orthodox.

“Judaism then was all this external stuff that didn’t speak to me, like the way people dress. … There was a major focus on learning Torah, but without… spirituality,” said Josh. “It was just routine, a very dull, dead-ended life.”

Menken said cases like Josh’s are not too uncommon in the 21st century. The causes for leaving observance can range from the most awful—abuse—to overly critical teachers or misguided community members/mentors who focus on a superficial Judaism, he said.

In particular, college a trendy time for Orthodox Jews to test their boundaries, said Menken, explaining that “when a person is just over 18 and goes out on his own and has to make decisions surrounded by people who do things differently and with different values,” he will likely be faced with peer pressure.

This was the case for Yaakov Cohen, who chose to leave his Orthodox upbringing during college.

“I was like, ‘I want to experience the world,’” said Cohen, who described his childhood Judaism as “shoved down his throat,” “following the motions,” and “zombie-like.”

Cohen said his decision to become less observant was not spontaneous, but gradual. He still remembers the first Torah commandment he broke: eating non-kosher food.

“It was Chester Cab pizza. I ordered a slice and just gulped it down. It was like a weird feeling overcame me, and I just ate that pizza in two seconds,” Cohen said.

“I was very frustrated at being frum (Orthodox),” Schneiderman said of his teenage years. “I was surrounded by negative frum people.”

The fact that Schneiderman is the son of divorced parents who themselves were newly observant made it hard for him to have the support he needed at home. He said some of his friends’ parents judged him because of his broken home and refused to let him play with their children.

When he chewed his stick of gum, “the fact that a bolt of lightning didn’t come out of the sky immediately made it easier,” Schneiderman said.

“The fact that you don’t immediately die from your sins made it easier to continue on the path of trying new things,” he said.

Josh turned on the light switch on Shabbat, and then let go of most other commandments.

“Turning on that light switch was a turning point in my life,” he said.

Today, however, Cohen, Schneiderman, and Josh are all Orthodox. They all found God again.

“It wasn’t the religion I came back to,” explained Cohen. “It was Jewish spirituality and a relationship with God.”

Cohen said he always had “spiritual tendencies” as a child that he wasn’t able to tap into. But once he experienced God himself, he felt compelled to return.

“It was going off for a run one day and seeing the sun set and saying [the verse], ‘Ma rabu ma’asecha Hashem kulam be’chochma asisah (How many are your works, they are all made with wisdom). That little spark started something in me,” he said.

Cohen said he often thinks about the “what ifs”: What if he had done something that tremendously impacted his relationship with his parents or community? What if he had fathered a child with a non-Jewish woman or gotten tattoos? Would returning have been harder?

Rabbi Avraham Arieh Trugman, who runs the Ohr Chadash outreach organization in Israel, said becoming observant is much harder for someone who chose to leave than it is for someone discovering a religious connection for the first time.

“When [secular people] discover the beauty of Torah and Judaism and Shabbos and the holidays and mitzvot, they realize this is something they were missing,” said Trugman. “If they had no idea how beautiful and rich Judaism is, there is a tremendous incentive to pursue that knowledge. For someone who was brought up religious, whatever made them walk away may still make a strong and emotional impression that is not easy to overcome.”

But no matter how off the path a person goes, the Jewish spark in his or her soul never dies, according to Trugman.

“There is a concept in Judaism that someone who commits a sin thinking he will just repent for it later cannot receive forgiveness. They don’t allow him to teshuva,” said Josh, explaining that this idea weighed on him during his journey back to faith. But he said he learned that it is not that one cannot repent, bur rather that repentance itself cannot come without effort.

Menken said the process of doing teshuva, as described succinctly in an article he has read on the Aish HaTorah website, is as follows: stop, regret, verbalize, make a plan to never do the sin again.

Trugman defined teshuva as “retuning to the natural state of the Jewish soul.” He said anyone can do teshuva, not just those who have sinned, but those who want to get closer to God.

One should start each day saying, “Hashem, if I would have known yesterday what I know about You today, I would have served You better,” he said.

Trugman, through Ohr Chadash, has hosted more than 10,000 people for Shabbat. He said he always tells visitors to take teshuva one day at a time.

“The secret of teshuva is never to be satisfied in a spiritual sense with what we think we have accomplished,” he said.

Schneiderman was diagnosed with cancer while he started his journey back to observance. He said reading the book “The Garden of Emunah” by Rabbi Shalom Arush helped him realize that God “is more patient than anyone,” and that he had time to complete his journey back. Today Schneiderman is married with two children, and described himself as “a master returner.”

“I have to constantly be recharging and renewing my relationship with God,” he said.

“I have learned that God forgives,” said Cohen, who today is married with children and living in Israel. “He gives us chance, after chance after chance. I think going off the derech has made me a stronger Jew.”

Maayan Jaffe is a freelance writer in Overland Park, Kan. Reach her at maayanjaffe@icloud.com or follow her on Twitter, @MaayanJaffe.