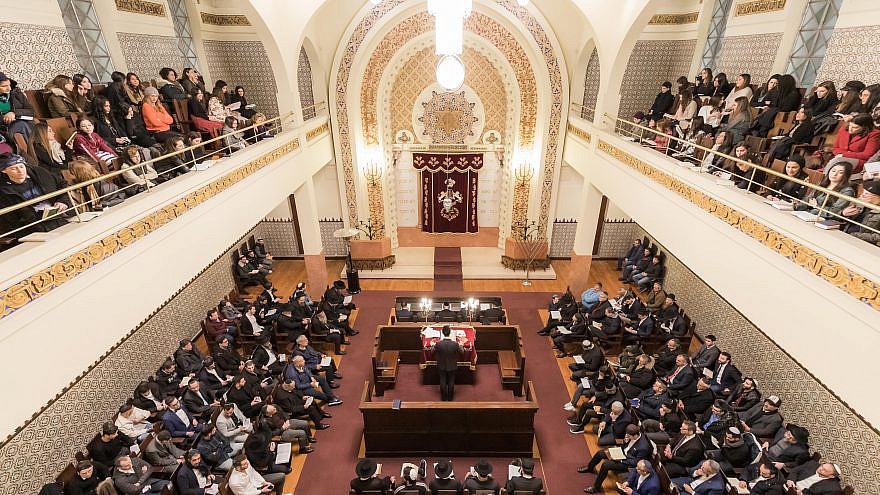 (December 22, 2021 / JNS) A new procedure through which Sephardic Jews of Portuguese origin can apply for Portuguese citizenship is expected to eliminate cumbersome paperwork by going digital.

Portugal has taken an active role in fostering Jewish life since 2015, and part of this effort included passing a law granting Portuguese nationality to Jews of families from traditional Sephardic communities whose ancestors had been expelled in the 15th century. This move came as Portugal seeks to atone for what became known as the Inquisition.

Chelsea FC soccer team owner Roman Abramovich recently received Portuguese citizenship as part of the country’s law of return for Jews of Sephardi descent. Although he was slammed in the press in the darkest terms, a Portuguese Jewish community representative told JNS that Abramovich’s Sephardic certification process, whose full documentation has long been in the possession of the Central Registry of Lisbon, received certifications from the highest international Jewish institutions, in compliance with legal criteria.

He added that in its contacts with the Portuguese government and parliament, “the Jewish Community of Oporto has always been in favor of the requirement that Sephardic applicants have a connection in the present to Portugal that is in the spirit of the law” in order to combat anti-Semitic arguments against the law.

Itay Mor, a lawyer who resides in Portugal, where he is president of the Rainbow Portugal Association, told JNS, “The government has been developing this digital platform since November 2019, when it met with a large number of lawyers and announced the end of the paper-based procedure. The cumbersome and slow procedure, including the initial application, gathering of evidence or criminal records, and translations, caused delays and inconveniences for the registry, lawyers and applicants. From 2022, the citizenship application procedure involving the Registry Office and the lawyers will move towards the digital platform and the paper-based procedure will be phased out.”

Mor explained that since 2015, one of the documents required in this procedure is a Sephardic certificate issued by one of two Portuguese Jewish communities. The Jewish Community of Oporto certifies Jews from traditional families of the Sephardic communities of Portuguese origin, and the Jewish Community of Lisbon also accepts applications from people who may not be Jewish or Sephardic today, but whose genealogy shows some Sephardic connections to Portugal.

It is unclear what repercussions would result from non-Jews declaring themselves to be of Jewish descent or relation, but it seems this is for the purposes of Portuguese citizenship only. Whether these applicants would be accepted as full-fledged members of the Portuguese Jewish community remains to be seen.

The Jewish community of Portugal predates the country’s official founding in 1143, as Jews lived in the kingdom for millennia, even prior to the Roman Empire.

Ashley Perry (Perez), president of Reconectar, an organization that seeks to reconnect the descendants of Spanish and Portuguese Jewish communities with the Jewish world, told JNS, “This is a very welcome development and once again reiterates the commitment of the Portuguese Government to provide citizenship to Sefaradim. Our family and community retained a strong connection to its Portuguese Sefaradi heritage and we are gratified that the Portuguese leadership is reinforcing it from their side.”

A few years ago, Portugal enacted legislation restoring Sephardim’s right to Portuguese nationality without them having to live in Portugal or to speak Portuguese. Applicants need a certificate of Sephardism, which can be obtained through the Portuguese Jewish communities or the communities of origin of the applicants abroad.

In April 2020, some members of Portugal’s parliament tried to impose a two-year residence period in Portugal prior to any nationality application out of concern that there could be problematic applications. But this was found to be unnecessary and in July, the parliament backed down from this initiative.

According to a member of the Jewish Community of Oporto who declined to be named for this article, the community wishes to see Sephardic certification carried out on a digital-electronic platform “to enable collaboration in real time between the Oporto Rabbinate and the Registry Office,” he said.

“It is important that the Registrars understand exactly who is a Jew, and how to read Jewish legal documents with halachic credibility, such as a marriage contract, and become familiar with the traditional Sephardic families of Jewish communities of Portuguese and Castilian origin,” he said. “We believe that teamwork between the Oporto Rabbinate and the Registry Office would enrich this institution, because the analysis of the applicants’ documents implies knowledge of the Jewish world and the Hebrew language.”

In contrast to the situation throughout Europe in general, where the growth of Jewish communities is on the decline, the Portuguese Jewish community is witnessing exponential growth in cultural, religious, organizational and social aspects.

In apparent recognition of this, on Oct. 5, the European Commission presented the European Union’s strategy to promote Jewish life during the period up to 2030, underscoring the fact that the area currently governed by the EU countries formerly had 9.5 million Jews, while today it has only 1.5 million, who still continue to emigrate. Member states are encouraged to develop national strategies by the end of 2022 and appoint special envoys and coordinators on combating anti-Semitism and fostering Jewish life.

Between July 2020 and the present date, the community of Porto, like that of Lisbon, has been partners with the Portuguese government in the development of better regulation of the law, which will soon be presented to the public. There are still details and issues that are being studied and that have yet to be decided.

Today, there are many rumors concerning what the Portuguese government will do with regard to the citizenship law and whether it will end it, or will require a house in Portugal, or make other difficult demands.

Despite those concerns, advocates remain pleased with the new development of the citizenship application process going digital.

“This is a historic process which is reconnecting the Jewish and Portuguese people who have such a long and illustrious mutual heritage,” said Perry.