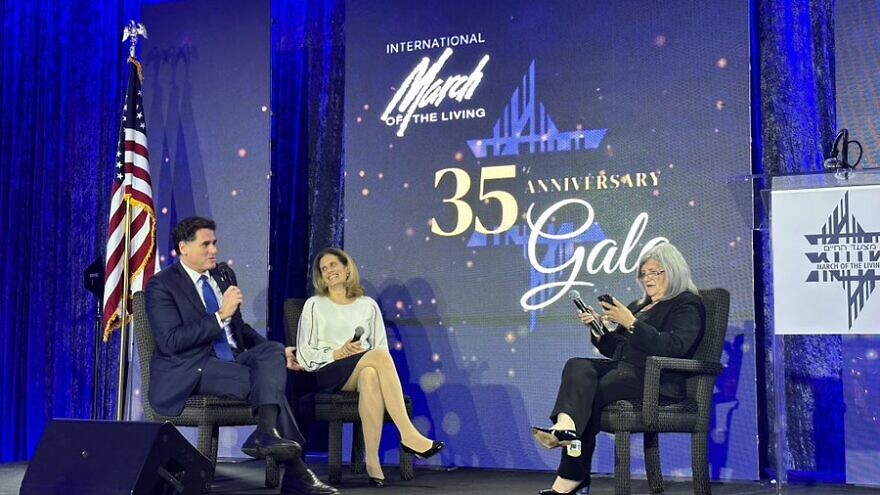 (January 11, 2023 / JNS) Israeli Strategic Affairs Minister Ron Dermer is back in the U.S., telling a gala audience in Miami that Jerusalem will be Washington’s most important ally in the 21st century.

Dermer, a former Israeli ambassador to the U.S. and native of Miami Beach, was honored, along with his wife, on Tuesday night by the International March of the Living. From the dais at Miami’s Beth Torah Benny Rok Campus, Dermer laid out his priorities in his new role: Iran, expanding the circle of peace and improving relations with the U.S.

Dermer and his wife, Rhoda, were “recognized for their outstanding service to Israel and the Jewish people,” according to the event’s website. The event had been long-planned, predating Dermer’s ministerial appointment.

He used the opportunity to set up meetings at the White House and State Department. Dermer has not yet commented on those meetings, and does not yet have any employees in his ministry to handle media inquiries. The State Department told JNS that it “had nothing to announce” regarding Dermer’s visit.

Dermer, who has served for decades as an adviser to and confidante of Israeli Prime Minister Benjamin Netanyahu, said the premier “is determined to expand [Israeli-Arab normalization efforts] and we hope to work very closely with the Biden administration.” Dermer, reiterating points he made to JNS last year, said, “I think the policy towards Iran is a critical part of expanding that because I think it opens the space for Arab leaders to move into a public alliance with Israel as we face this common enemy together.”

He said that his ministry’s top priority will be to ensure that the “evil regime in Tehran, which openly calls and actively works to destroy the one and only Jewish state, [does] not achieve that goal.”

Dermer, who had a tense relationship with the administration of President Barack Obama, said on Tuesday that he hopes “to work very closely with the Biden administration” in order to “significantly upgrade the bilateral ties that we have with the United States of America.”

He repeated his prior claims that Israel “will be the most important ally of the United States in the 21st century. And what I’m tasked to do is to see how we can accelerate this process.”

In a rare bipartisan showing, David Friedman, who served as President Donald Trump’s ambassador to Israel, and the Biden administration’s Ambassador Tom Nides will be jointly leading this year’s International March of the Living trip to Poland—including participants’ march from Auschwitz to Birkenau on Yom HaShoah (Holocaust Remembrance Day).

He answered, “We didn’t need the Holocaust to teach tolerance. The lesson of the Holocaust is that the Jewish people need power.”