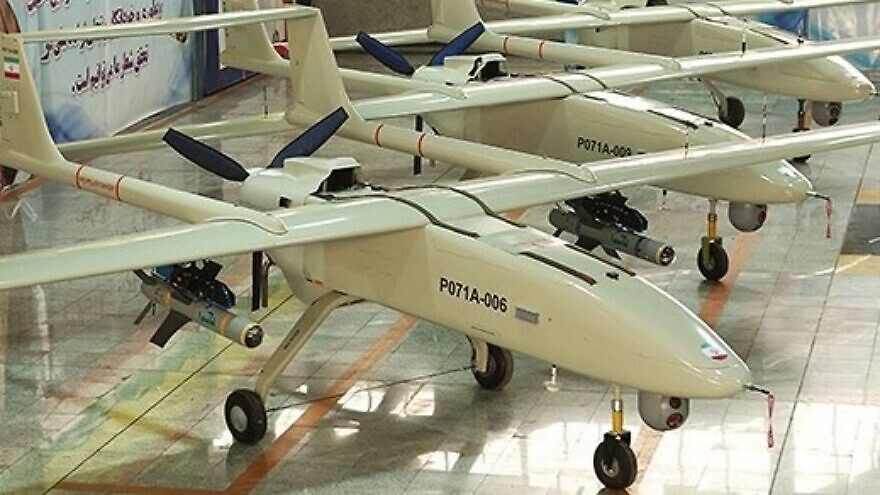 (October 12, 2022 / JNS) Russia is deploying Iranian-made unmanned aerial vehicles (UAVs) in its war against Ukraine, and although it is not yet possible to determine their exact operational effectiveness, the weapons could pose a significant challenge for the Israeli military in a future conflict, a prominent drone and missile expert told JNS.

Tal Inbar, former director of the UAV Research Center at Israel’s Fisher Institute for Air and Space Strategic Studies, and co-founder of the Ilan Ramon Space Conference, said that footage from Ukraine demonstrates widespread use by Moscow of the Iranian-made Shahed 136, a suicide UAV the Russians call Geran-2.

“From gathering photos of parts of the system, it emerges that some 100 UAVs of this type have been used,” said Inbar, who also noted that “the Ukrainian air defenses have reported downing a substantial number of these attack systems.”

On Monday and Tuesday, Ukrainian cities were bombarded by Russian cruise missiles, ballistic missiles and UAVs, with the Shahed 136 among the systems apparently used. It came as part of a major assault the Kremlin described as retaliation for this weekend’s bombing of the Kerch bridge connecting Crimea to Russia.

Ukrainian President Volodymyr Zelensky on Monday told Reuters that, “We are dealing with terrorists. Dozens of missiles and Iranian Shaheds. They have two targets: Energy facilities throughout the country … [and] people.”

In July, White House National Security Adviser Jake Sullivan said that Russia had requested from Tehran “hundreds” of UAVS for the war in Ukraine.

According to Inbar, there is evidence that Moscow is also using the Iranian Mohajer 6 drone in the ongoing conflict.

“As this stage, it is not possible to determine the operational effectiveness of these systems in the absence of solid information that links an attack to the attacking system,” stated Inbar. “At the same time,” he qualified, “these systems are highly precise and if they are not intercepted, the damage that they produce can be substantial to a range of targets.”

“UAV swarms reached their targets in the depth of Saudi Arabia’s hinterland with complete surprise, remaining undetected by air defenses,” Uzi Rubin, a prominent Israeli air defense expert and founder of the Arrow programs, told JNS. “Hence, no attempt was made to intercept them. Their precision was exceptional,” he added.

The Mohajer 6, meanwhile, can conduct missile strikes and surveillance missions at a reported range of some 200 kilometers (125 miles).

The Alma Center, a defense research group specializing in the security challenges Israel faces along its northern borders, assessed in Dec. 2021 that Hezbollah possesses some 2,000 Iranian-manufactured UAVs.

For his part, Inbar said that Israel is aware of the threat and cautioned that “a massive activation of these systems, should it occur, will form an event with considerable potential damage.”