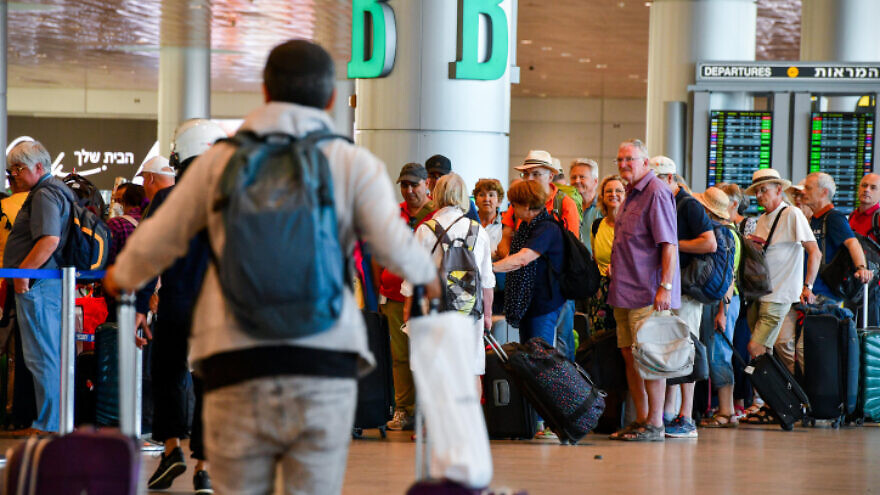 (June 14, 2022 / Israel Hayom) After returning to full operations in the wake of the COVID-19 pandemic, Israel’s Ben-Gurion International Airport is having difficulty coping with heavy passenger traffic as the summer travel season gets underway.

Even though the airport has reopened Terminal 1 and airport director Shmuel Zakai is on the floor himself helping conduct security checks, the lines remain long.

Zakai has said that the airport is having difficulty recruiting new staff and is facing a shortage of some 1,000 workers. Zakai said he expects it will take until Passover 2023 for the situation to improve.

The worker shortage is so severe that some airlines are operating with 40% fewer staff than they had on board at the same time a year ago.

The Shavuot holiday, which this year fell in early June, saw some 300,000 travelers pass through Ben-Gurion airport, and some 4 million travelers are expected to depart from and enter Israel this summer.

In recent weeks, a number of airlines have contacted Ben-Gurion to request slots for additional flights to and from Israel. The airlines were informed that the airport was unable to accommodate their requests.

Senior airport officials explained that even without additional slots, the airport was dealing with a volume of approximately 90% of the flights it handled in the record year of 2019, prior to the pandemic.

Airlines that request approval for charter flights are also expected to encounter refusals, which could lead to more expensive ticket prices due to the comparatively low number of available flights.

Travelers who landed at the airport last Friday were forced to wait hours for taxis to take them home. Some gave up and went back inside to spend the night at the airport.

A few weeks ago, Israel Hayom revealed that even though flights have resumed, the Transportation Ministry has not reinstated the night and weekend trains to the airport, meaning that travelers need to ask for rides or pay expensive taxi fares to reach their destinations.

The difficulty in arranging taxis affects not only Israelis but also tourists, who are met with a frustrating first encounter with Israel. Officials involved in the matter told Israel Hayom about a number of instances of taxi drivers preying on tourists, charging them as much as thousands of shekels.

In the past, there were designated taxi companies that worked with the airport, and airport employees could also coordinate with taxi drivers to ensure that there were enough taxis available at peak times. This coordination has fallen by the wayside.

“There’s no oversight. No one knows which drivers enter the airport, no one knows what they’re doing,” said one official.