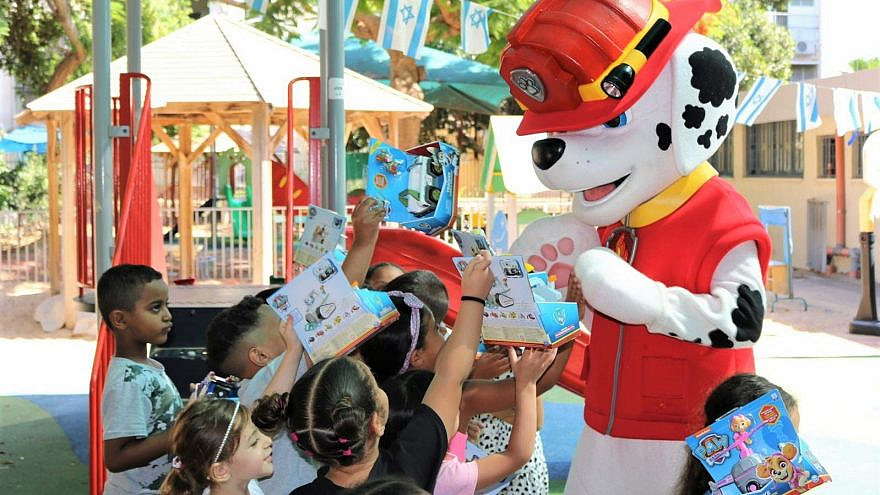 (June 8, 2021 / JNS) The Toy Movement, a philanthropic initiative founded by Canada’s largest children’s toy and entertainment company Spin Master, distributed toys this week to Arab and Jewish children at four nursery schools in Jaffa, in partnership with the Peres Center for Peace and Innovation.

The children, whose neighborhoods were recently the scene of intercommunal tension and violence, each received a toy from Spin Master’s “Paw Patrol” range, one of the world’s most popular toy brands.

Odette Levy, the mother of one of Spin Master’s founders, was on hand alongside Efrat Duvdevani, director general of the Peres Center, to hand out the toys at two local kindergartens.

The Toy Movement resolved to do something positive and constructive for the children of Jaffa and their parents, who in recent weeks have seen their neighborhoods at the center of acute tension and violence between Arab and Jewish residents. In fact, it aims to expand this collaboration, turning the distribution into an annual event.

The movement prides itself on community engagement, and for bringing joy to children in times of conflict and difficulty. In 2014, it shipped thousands of toys to children in Israel and the Gaza Strip during the summer war. The initiative has also previously donated toys to underprivileged Bedouin and Druze communities in Israel.

Further afield, it shipped toys to New Orleans in the wake of Hurricane Katrina in 2005 and has donated toys in Jordan, Mexico, Turkey, South Africa, Nicaragua, Iraq, Canada, Uganda, Colombia, Kenya and Lebanon.

The Peres Center, based in Jaffa, has worked to foster positive relations between diverse communities in Israel and beyond for more than two decades.