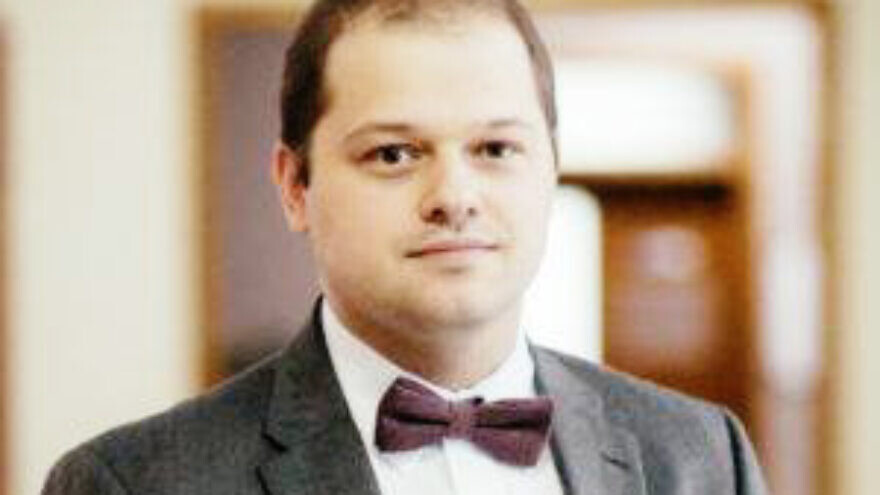 (October 3, 2022 / JNS) A renowned expert on human rights and religious freedom, Dr. Dmytro Vovk found himself unable to pursue his research this spring after Russia invaded his home country of Ukraine.

Vovk serves as the head of the Center for the Rule of Law and Religion Studies at Yaroslav Mudryi National Law University in Kharkiv, Ukraine, an area under heavy assault by the Russian military.

He found a unique ticket out: Yeshiva University in New York City.

“I was contacted by Yeshiva in July, and they said that we might have a program for you. I’m sure that they know me and know my academic reputation,” Vovk told JNS. “But of course, it was also an attempt to support a Ukrainian scholar at risk.”

Vovk is leading classes at Yeshiva University’s Cardozo School of Law as part of a two-year appointment funded by the Prins Foundation. He has previously served as an expert on human rights and rule of law for USAID, OSCE/ODIHR, the Council of Europe and the Constitutional Commission of Ukraine. The author of a number of publications, Vovk was also a Kennan-Fulbright Fellow at Woodrow Wilson International Center for Scholars in Washington, D.C.

“Having Prof. Vovk is a special opportunity for our university community. We are thrilled to welcome him to YU and excited for his new colleagues and our wonderful students to meet and learn with and from this award-winning scholar,” said Selma Botman, Yeshiva University’s provost and vice-president for academic affairs.

“This is a very interesting challenge for me, because while I did a lot of lectures at American and European universities, I have never had regular classes with American students, and I’m very interested in and eager to have this experience,” said Vovk. “I want to prove to myself that I can teach these students, that I can be interesting.”

As a visiting associate professor, Vovk will officially begin teaching classes in the spring, but has been holding lectures and “pop-up” classes this semester, teaching subjects like LGBTQ law, policy and history.

The program started just days after Yeshiva University announced that it would temporarily shut down all of its undergraduate clubs to avoid recognizing the YU Pride Alliance group, leading to a Supreme Court decision that favored YU’s position.

Vovk said he has been impressed with his students’ inquisitiveness and their knowledge of European subject matter. He is trying to keep to the subject matter at hand, however, even as some students want to shift the focus.

“I had an interview with Yeshiva students this morning, and they asked me how [Ukrainian President Volodymyr] Zelenskyy perceives his Jewishness,” Vovk recounted “Sorry, I’m a lawyer. I feel there’s a spike of this interest about Ukraine, but I prefer to have this interest [be placed] in a bit of a different historical situation.”

Vovk said it was a difficult decision to leave home, especially with children as young as two. However, he added, Cardozo Law School and its reputation for scholarly work made the offer worth serious consideration. Since he’s made the move to New York, his long-term plans have become unclear.

“I don’t have any plans beyond 2024,” he said. “[Vladimir] Putin formally annexed some Ukrainian territories and a nuclear option is on the table. And the second point is that academic life is a sort of nomadic style of life. So, it’s more about projects that I will have in future and less about a particular place. I need to have an opportunity to do my research and to teach in order to decide whether I’ll stay here or go somewhere else.”

For now, Vovk is adjusting to life in the Big Apple, which has its own set of challenges.

“On one hand, you have all these advantages and privileges of living in such a big city. There’s all this cultural diversity, these great museums. And every building downtown means something for American history, for global history,” he said. “But I’m still at the point where I’m trying to make it here. When you start living in a megaphone, it’s always a challenge.” He added that the locals have been teaching him that if he can make it in New York, he can make it anywhere.

Vovk has remained in touch with his colleagues back home, both in Kharkiv and at another institution near the border with Poland where he also teaches. He said he is amazed by their perseverance.

“What is remarkable and amazing is the Ukrainian universities, including those in the territories affected by the war directly, try to keep things going, to work with students, because for them, it’s even more important. They started their education, and they need to continue it in some way,” said Vovk.

“I can’t say that academic life in Ukraine has fully stopped. But of course, the effects of the war…” Vovk trailed off.