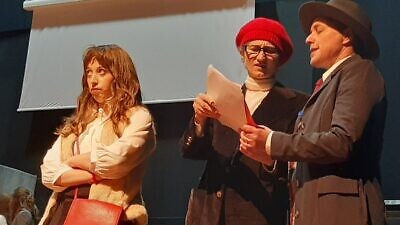 Elisheva Avidar was born in Dnipro, the fourth largest city in the Ukraine. It’s right in the center of the country, she says, along the Dnipro River, for which it is named. Before the laws of de-communization, the city was called Dnipropetrovsk. And long before the Communist Soviet Era, the city was known as Ekaterinoslav – named after the Empress of Russia, Catherine II. It was a Jewish city and a center of Zionism and Hasidism.

Today, from her Jerusalem home, Elisheva monitors the situation in Dnipro. Her distant cousins have left home and taken up arms to fight the Russians, and Elisheva is worried about them, and concerned about the women and children hiding in underground shelters. Yet, she is trying to balance the news from Dnipro with her daily life in Israel.

“I’m very proud of those who fight against oppression, and I pray for their safety.” Elisheva says. “And here I am, as fate would have it, trying to prepare for a theatrical production about Soviet oppression that I am performing in a few days.”

Ironically, Elisheva is going on stage on Sunday night, as an anti-Semitic theater director in the upcoming historical musical, “WHISPER FREEDOM: The Soviet Jewry Struggle”, a musical by The Women’s Performance Community of Jerusalem and OU Israel. The Soviet suppression of freedom is a theme that dominates the new musical, just as the Russian anti-freedom drama is being played out in the real world.

While “WHISPER FREEDOM” features Jewish refuseniks (those who applied for exit visas and were refused), Elisheva’s parents never applied, and they didn’t even tell her outright that they were Jewish. “I always lived with the sense that this is not our home, that this is just a temporary place of residence, but my parents were waiting for the right time, and didn’t apply to leave.”

“My family didn’t feel a real attachment to the land, even though we heard in school that you had to be loyal to Mother Russia, this is where you belong, this is where your ancestors were.” While her grandparents actually were born in the Pale of Settlement (the ghetto-like area, which included the Ukraine, created by Catherine the Great to hold the Jews), loyalty to Russia “was never encouraged” in her home. “I remember hearing my father say, we will leave as soon as we can.”

In her home, there was no attachment to the country. No propaganda. Her parents always hoped to live outside the Soviet Union, Elisheva says, but it was not possible then.

“In our show, ‘WHISPER FREEDOM’, the star Elena Ivanova tries so hard to conceal her Jewish identity, and avoid a life of hatred and anti-Semitism,” she comments. “And that is exactly what many of my generation of Soviet Jews did, as well.”

GROWING UP AS A SOVIET CHILD

Her parents gave her no reason for their detached feelings toward the Soviet Union, and Elisheva did not understand why she couldn’t be like the other children at school.

“In 1989, I was eight years old. The Soviet Union still existed,” Elisheva recalls, “and I was looking forward to becoming part of the Grandchildren of Lenin. At the ceremony, we got red stars to wear close to our heart, and had to repeat that we wanted to become like Lenin. We were all looking forward to third grade when we would become ‘Pioneers’, ready to help, to be the best student, and to wear red kerchiefs and uniforms. My grandparents were very against that. They didn’t explain why, but they didn’t want me to wear the star. My father told me, ‘This is immoral, but don’t say it in school. Just don’t be part of it.’”

When she reached the third grade, the Soviet Union collapsed, and things changed very quickly.

Elisheva’s family was very assimilated, like most other Jews who were detached from Jewish life for three generations. She recalls, with the fall of the Soviet Union, suddenly people started speaking fearlessly about Israel and Judaism, and she says, her Jewish soul “woke up at age 12.” She discovered there were other Jews in the family, that she had neighbors and even classmates who were Jewish, and she never knew. She also knew that one day their family would “go to another country.”

Suddenly Jewish music played on their record player and Elisheva heard Hebrew for the first time, and the songs of Ofra Haza. “Freedom was everywhere! I still remember that my first Alef Bet dictionary cost 20 rubles.”

In 1992, when Mordechai ben David came to Dnipro, Elisheva’s father attended his concert along with 5000 other Jews. When he returned home, Elisheva remembers, he said, “I can’t understand what’s happening to me. My heart is burning. We have to go to Israel.”

Her parents never did move to Israel, choosing America instead, because her aunt lived there. But after she married, Elisheva and her husband moved to Jerusalem.

A JERUSALEM POINT OF VIEW

“From my Jerusalem viewpoint and my Aliyah eyes, my personal opinion is that Jews in the Ukraine are becoming too comfortable,” Elisheva says, “and I see, with this war, it is another wake-up call for the Jews to come back home to Israel.”

It is also the site of Babyn Yar, one of the largest mass killing field of Jews during the Holocaust.

But today, Jewish life, without the threats, has reawakened in Ukraine. Elisheva says, “Life there, like never before, is becoming very comfortable for religious Jews. The yearly pilgrimage to Uman…The Lubavich roots in Dnipro…Ukraine even makes kosher matzah that is exported to the former Soviet Union, Western Europe, America and other countries.”

Despite the flourishing Jewish schools, organizations and synagogues, despite the kippot and religious individuals who walk without fear in the streets of Ukraine, Elisheva feels it is time for Ukrainian Jews to come home.

See Elisheva as Konstantin Tabokov, along with a cast of  more than 50 women, in the historical musical “WHISPER FREEDOM: The Soviet Jewry Struggle” on March 6, 10, 13 at the IASA Theater in Givat Massua, Jerusalem. For women only. Tickets: https://bit.ly/WPCJM
For more information: http://bit.ly/wpcjerusalem

Republish this article
About The Publishers
The Women's Performance Community of Jerusalem
Publish your organization's press release on JNS Wire
Releases published on the JNS Wire are communicated and paid for by third parties. Jewish News Syndicate, and any of its distribution partners, take zero responsibility for the accuracy of any content published in any press release. All the statements, opinions, figures in text or multimedia including photos or videos included in each release are presented solely by the sponsoring organization, and in no way reflect the views or recommendation of Jewish News Syndicate or any of its partners. If you believe any of the content in a release published on JNS Wire is offensive or abusive, please report a release.