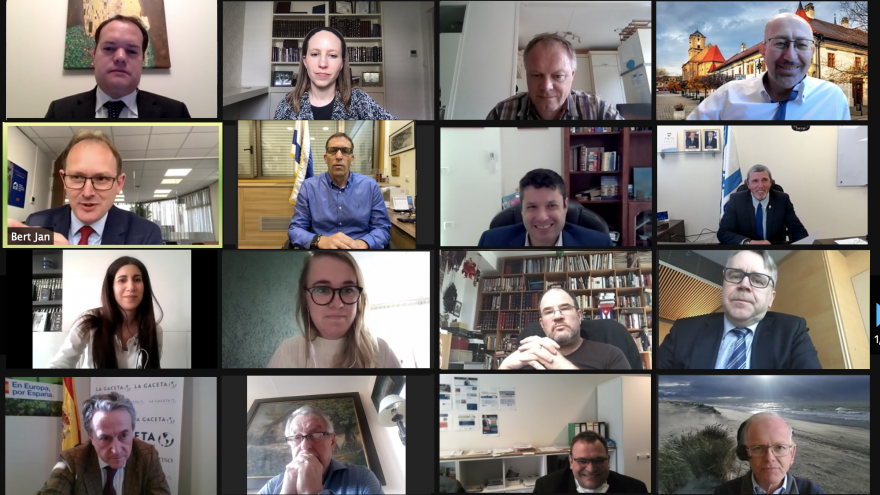 (March 7, 2021, JNS Wire) European lawmakers gathered for an online conference titled Jerusalem: Culture, Faith and Science hosted by MEP Bert-Jan Ruissen, Chairman of the European Parliamentary Israel Allies Caucus and MP Peter Kremsky, Chairman of the Slovakian Parliamentary Israel allies Caucus. MEP Ruissen opened the program by discussing the importance of Jerusalem’s ancient history and recognizing how Israel offers people of all faiths access to their holy sites. “Jerusalem, with its many thousands of years of history, its cultural richness and its religious diversity is one of the most particular and distinctive capitals in the world. At the same time we see Jerusalem being a stumbling stone in international politics, including in the EU. We should cherish the special character of Jerusalem in the future by not denying its past, and its 3000 years of Jewish history, which makes the city even more special. I am convinced that only a democratic Israel can guarantee a viable way of life based on mutual respect for all major religions and cultures” said Ruissen.

MP Kremsky spoke about the support for Jerusalem stemming from Czechoslovakia even before the creation of the State of Israel. He also highlighted the move of the Czech Republic diplomatic office to Jerusalem earlier this week as a testament to the Czech Republic’s current commitment to Jerusalem. “In 1926 Czechoslovakia opened its first consulate in Jerusalem, which was two decades before creation of the independent State of Israel. Our president Tomáš Garrigue Masaryk was the very first president to visit Jerusalem and Tel Aviv after World War I. This is the part of our history that connects us to Jerusalem. I am thankful for these strong roots between our two countries and I hope this alliance will become even stronger in the coming years. Today, we can hear voices trying to deny Israel’s right to choose its own capital and trying to erase Jewish history from this city. I believe every sovereign country has the right to choose its capital. United Jerusalem has already been part of the modern Israeli state for 54 years. Since 1967 believers of all religions can freely worship in this city and visit their holy places. Throughout the years Israel has shown its capability to administer this city and its treasures.”

Israel’s Minister for Jerusalem and Heritage Rafi Peretz spoke about the new developments taking place in Jerusalem, in preparation for the reopening of tourism over the coming months. MK Matan Kahana, a member of the Knesset Christian Allies Caucus, which serves as a “sister-caucus” to all the Israel Allies Caucuses across the globe, thanked the parliamentarians for their strong stance on Israel and Jerusalem and discussed his initiatives as Chair of the lobby for tourism in Jerusalem. “From an archeological perspective, we see that ancient Israel’s roots are deeply tied to Jerusalem.  On legal grounds, we know from the San Remo conference of 1920 that the legal title to the Land of Israel, including Jerusalem, belongs to the Jewish state. Militarily, Israel earned its right to reunify Jerusalem in the defensive Six Day War of 1967. These moral, legal and historical arguments empower our resolve to protect Jerusalem as the eternal and undivided capital of Israel.”

Josh Reinstein, President of the Israel Allies Foundation, which oversees the activities of the 50 Israel Allies Parliamentary Caucuses worldwide said “Through the efforts of faith-based diplomacy we have been able to unite pro-Israel parliamentarians around the world and form one global voice in support of preserving the unity of Jerusalem.”

Republish this article
About The Publishers
Israel Allies Foundation
Founded in 2007, the IAF is an umbrella organization that coordinates the activities of 50 Israel Allies Caucuses in parliaments around the world and is dedicated to promoting communication between parliamentarians and legislators who share a belief that Israel has the right to exist in peace within secure borders.
Publish your organization's press release on JNS Wire
Releases published on the JNS Wire are communicated and paid for by third parties. Jewish News Syndicate, and any of its distribution partners, take zero responsibility for the accuracy of any content published in any press release. All the statements, opinions, figures in text or multimedia including photos or videos included in each release are presented solely by the sponsoring organization, and in no way reflect the views or recommendation of Jewish News Syndicate or any of its partners. If you believe any of the content in a release published on JNS Wire is offensive or abusive, please report a release.