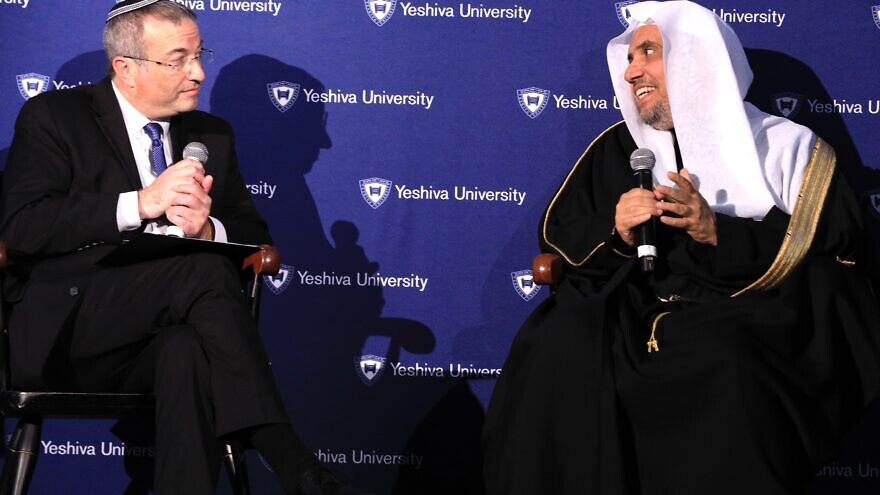 (October 24, 2021, JNS Wire) On Wednesday, October 20, 2021, His Excellency Sheikh Dr. Mohammad Al-Issa, secretary general of the Muslim World League, visited Yeshiva University to participate in “Jews and Muslims: A Look Toward the Future,” the inaugural conversation in the Presidential Forum series, in which Yeshiva University president Rabbi Dr. Ari Berman engages with the global leaders and voices who are shaping today’s world. The event was conducted in association with the Rabbi Arthur Schneier Program for International Affairs of Yeshiva University, the Conference of Presidents of Major American Jewish Organizations, and the American Sephardi Federation.

After a private lunch between Dr. Al-Issa, Rabbi Berman and some close friends of Yeshiva University, Rabbi Berman and Dr. Al-Issa sat down to discuss the growing relationships between Muslim and Jewish communities across the globe to a contingent of faculty, staff and students from Yeshiva College, Sy Syms School of Business, the Graduate Program in Advanced Talmudic Studies (GPATS), Yeshiva University High School for Girls, and the Marsha Stern Talmudical Academy (MTA). Also in attendance were Rabbi Arthur Schneier; Chella Safra; Michael Miller, Malcolm Hoenlein, executive vice chairman of the Conference of Presidents of Major American Jewish Organizations; and Jason Guberman, executive director of the American Sephardi Federation.

Rabbi Berman began the program by introducing Dr. Al-Issa. “In the Torah, Ishmael and Isaac reunite at the funeral of Abraham. Today we have an opportunity to not only come together to bury our past but build our brighter future,” he said. “The visit by Sheikh Mohammed al-Issa to the flagship Jewish university, reflects the enormous opportunity today of reconciliation not only between nation states but between peoples“

Malcolm Hoenlein also welcomed Dr. Al-Issa, thanking him for visiting Auschwitz and fighting against Holocaust denial. Dr. Al-Issa is the senior-most Muslim leader to visit the Nazi concentration camp and has publicly spoken out against anti-Semitism and in support of Holocaust education in the Muslim world.

Dr. Al-Issa then spoke to the audience through a translator, noting the “shared responsibility” between Jews and Muslims in steering a world so focused on science, technology and knowledge back to one based in values. “Universities need to teach values so we can apply technologies in the right way and not cause division.” He also spoke about the power of language and how words can be used both to heal and harm. “We may have differences, but we must have love for one another and come together,” he said.

Following his remarks, Rabbi Berman and Dr. Al-Issa engaged in conversation on Dr. Al-Issa’s influences, his views on the Middle East and his family life.

At the conclusion of the event, Rabbi Berman commented that this event gave Dr. Al-Issa an opportunity to speak directly to the young Jewish leaders of the world of tomorrow. “For them to be in dialogue with you and hear your message of reconciliation, so that when they move into their positions of influence and authority in the future—they will be informed and inspired to move this conversation forward.”

Republish this article
About The Publishers
Yeshiva University
Publish your organization's press release on JNS Wire
Releases published on the JNS Wire are communicated and paid for by third parties. Jewish News Syndicate, and any of its distribution partners, take zero responsibility for the accuracy of any content published in any press release. All the statements, opinions, figures in text or multimedia including photos or videos included in each release are presented solely by the sponsoring organization, and in no way reflect the views or recommendation of Jewish News Syndicate or any of its partners. If you believe any of the content in a release published on JNS Wire is offensive or abusive, please report a release.