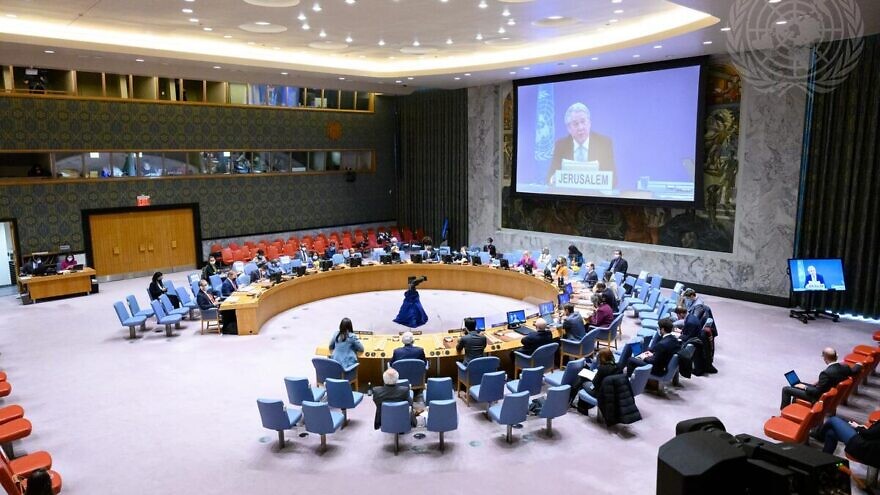 A view of the Security Council meeting on the situation in the Middle East, including the Palestinian question. On the screen is Tor Wennesland, Special Coordinator for the Middle East Peace Process. Credit: U.N. Photo/Loey Felipe.
Republish this article
1151 WORDS
Spread the word.
Help JNS grow!
Share now:

(January 20, 2022 / JNS) It was a ministerial-level meeting for which almost no one sent a foreign minister. And it seems to be reflective of how stale and tired the United Nations’ regular debates on the Israeli-Palestinian conflict have become.

Norway, the longtime U.N. penholder of the Israeli-Palestinian file, holds the presidency of the U.N. Security Council this month and sought to upgrade the monthly meeting on the issue to, in its words, refocus the Council’s attention on the topic.

“My hope is to contribute toward renewed efforts to solving the conflict. The two-state solution is the only viable path to peace and security for both peoples. I invite the Security Council to join me in calling for this. The current situation is volatile and could flare up at any time, bringing violence and hostilities. … My fear is that we forget this conflict, and it is in Norwegian interests to keep attention on it,” said Norwegian Foreign Minister Anniken Huitfeldt before the open debate got underway.

Despite Norway sending its foreign minister to chair the discussion, Ghana was the only other Security Council member to bring its top diplomat to New York. Norway set the tone early, chiding Israel for settlement activity and evictions of Palestinians in Jerusalem, while lamenting the Palestinian Authority’s “severe financial difficulty,” leaving unmentioned the Ramallah-based government’s rampant corruption and its policy of paying a substantial part of its budget to terrorists who kill and maim Israelis, including civilians.

“When the Palestinians see the support and honor that their leaders give to terrorists, they clearly see that terror pays. … The Palestinian Authority continues to pay the salaries of terrorists in a ‘pay to slay’ policy that means, the more Jewish blood you spill, the more money you and your family get,” Israeli Ambassador to the United Nations Gilad Erdan said in the Security Council Chamber.

Erdan sought to counter the narrative of P.A. Foreign Minister Riad Al-Maliki, who, among other things, accused the Security Council of allowing Israel to act with impunity through the failure to enforce any number of its own resolutions.

“We heard from the Palestinian foreign minister. We heard all the regurgitated accusations and baseless claims. But as he stands here and points the finger at Israel, what the minister conveniently ignores is that in the last month, just one month, more than 200 terror attacks have been carried out by Palestinians against Israeli citizens—143 rock-throwing attacks in just a month, 20 grenades and Molotov cocktails in just a month. And dozens more stabbings, car-rammings, shootings and other violent physical attacks risking and claiming Israeli lives all in just a month. That ended a year which saw thousands of other violent attacks against Israelis; attacks that are, at best, only marginally mentioned to the council.”

Erdan put an emphasis on rock attacks, noting their deadly, violent nature. He brought a large rock to the podium while addressing reporters, noting that a stone of that size claimed the life of 4-year-old Israeli Adele Biton. Maliki later called Erdan’s presentation a gimmick as he struggled to explain to reporters the “engineering” of how difficult it would be to throw such a rock more than a meter. 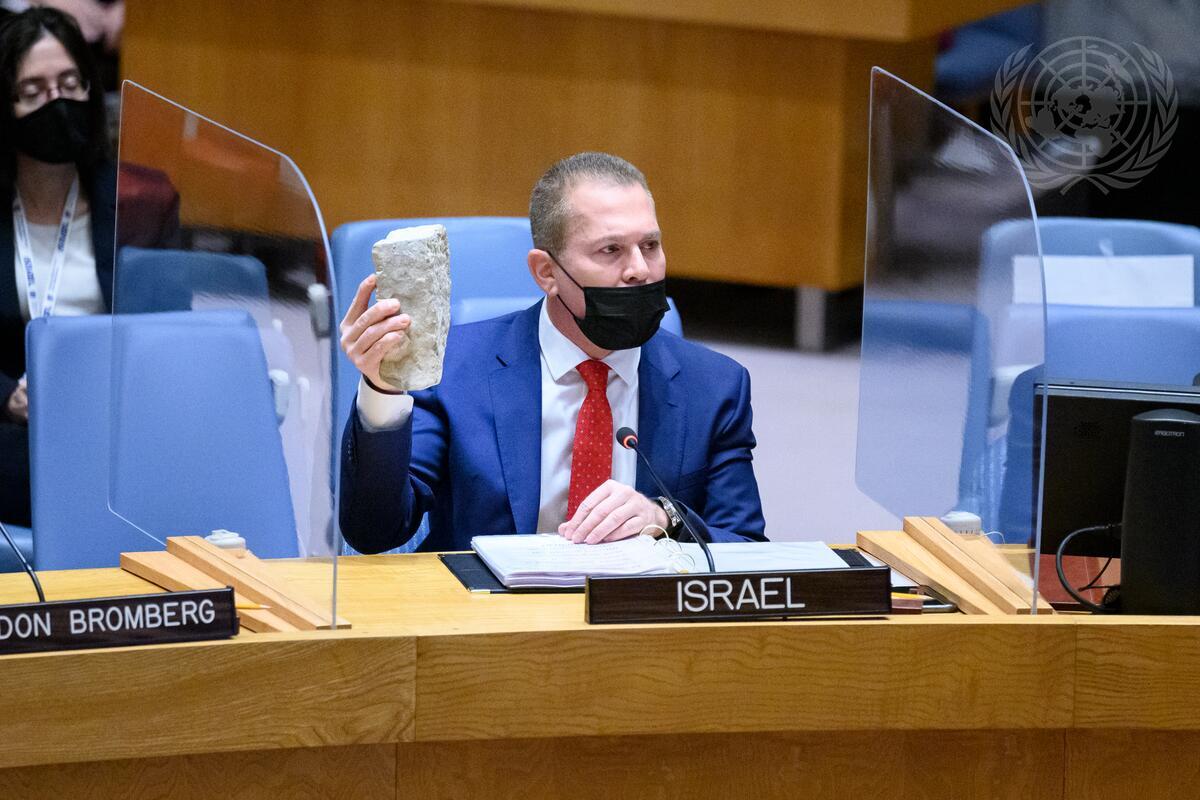 Israeli Ambassador to the United Nations Gilad Erdan holds up a rock as he addresses the Security Council meeting on the situation in the Middle East, including the Palestinian question. Credit: U.N. Photo/Loey Felipe.

Erdan also took to task the council and reporters for swallowing the “false Palestinian narrative” surrounding this week’s eviction of a Palestinian family from the home in the Shimon HaTzadik/Sheikh Jarrah neighborhood of Jerusalem, noting that Israel’s independent judiciary found that the home was illegally built and that the land is to be used for a special-needs school for the neighborhood’s Palestinian residents, as well as six kindergartens and other public facilities.

From clean-water concerns to an uptick in anti-Semitism

There was some notable balance in the debate.

Civil society organizations who are invited to present at these meetings are nearly invariably slanted towards extreme criticism of Israel. This time, the Israeli and Palestinian co-directors of EcoPeace Middle East, a regional environmental peacebuilding organization that includes Jordan, were brought in to speak.

Palestinian director Nada Majdalani spoke of seeking a “green-blue deal” for the Middle East, including the restoration of the Jordan River watershed, noting that failures in the peace process enable further water scarcity, putting pressure on the Palestinian economy. Israeli Gidon Bromberg urged an end to “zero-sum” thinking on water issues as climate change creates fresh scarcity and conflict threats, citing Israeli leadership on water security but also a “sanitation crisis” in the Palestinian-governed territories.

U.S. Ambassador to the United Nations Linda Thomas-Greenfield, who has previously called for less obsession with the Israeli-Palestinian file at the council, reiterated her opposition to the council’s often laser-focus on purported Israeli violations, asserting that a trust gap between Israelis and Palestinians is “the single biggest obstacle to political progress and peace,” and that most of the work of rebuilding that trust needs to be done directly between the Israelis and Palestinians themselves.

“Let me start by reaffirming our strong support for a two-state solution, one in which a Jewish and democratic Israel lives in peace alongside a sovereign, democratic and viable Palestinian state. And as I’ve noted before, I look forward to the day when we do not find the need to single out Israel for this type of unfair focus in this council,” said Thomas-Greenfield, who added that, for the first time in many years, all Security Council members have diplomatic relations with Israel, serving as a testament to Israel’s global contributions.

She spent a substantial portion of her statement focused on anti-Semitism, noting that International Holocaust Remembrance Day is approaching on Jan. 27.

“The harrowing events in Colleyville, Texas, this past weekend brought this home for us Americans. It reminds us that we all must work together to stand against anti-Semitism and extremism. The United States will continue to champion justice for victims of anti-Semitism, and for Holocaust survivors and their descendants. We are committed to building a world where the lessons of the Holocaust are taught universally, where survivors live out their days in dignity and comfort, and where all humans’ lives are shown decency and compassion,” said Thomas-Greenfield.

Notably, United Arab Emirates Ambassador to the United Nations Lana Nusseibeh, whose family has ties to Jerusalem dating back centuries and whose uncle was supposed to run on a UAE-backed electoral list opposing the P.A. last year before P.A. leader Mahmoud Abbas again canceled elections, addressed the council on the conflict for the first time since the UAE joined it this month.

Nusseibeh was mild in her criticism of Israel and gave no praise to the P.A., spending the opening portion of her statement denouncing this week’s terror attack by Iran-backed Houthi rebels on the UAE capital of Abu Dhabi. Erdan offered his condolences to the UAE at the outset of his own remarks, placing the blame on Iran for the actions of its proxy in Yemen.